We were very hot on this guy late last year and he copped a feature in our pre-season document “The List” with Tim Kelly leaving the Cattery and extra midfield minutes opening up. Unfortunately (probably fortunately) our jets cooked a little as a he battled a knee complaint through the pre-season and saw just 70% TOG in the first 3 games for an average of 54. Since then he has averaged 90.4, including a 95 average over the last 4 weeks where he has taken over a major role in the engine room averaging 25 disposals, 6 marks and 89% TOG.

A little bit of a late bloomer, Menegola is now 28 years old and playing the best footy of his career. He had a red hot start to his fantasy career averaging 98 in his first 50 games and now we are seeing him go at an average of 119 BCV. While we aren’t sure if he can keep up the 95 average, he definitely should finish out the year in that 85-90 bracket which would see him in that top tier of fantasy midfielders. Geelong are also currently averaging the 2nd most disposals of any club and are starting to make a push for another Top 4 finish. In just 0.75% of teams, Menegola could be a real handy POD and help you jump up the rankings as everyone starts to fill out their sides and we see a lot of coaches carrying very similar players and very similar midfields. Plenty of green ticks here ✅

McDonald will head into Round 12 with a ridiculously low breakeven after a 3 game rolling average of 101. Mopping up plenty in the Kangas back half he is averaging 29 disposals the last few weeks with 82% of them uncontested. The kid-prodigy, Luke McDonald was linked to a high draft pick for a large part of his junior career and spent his draft year playing VFL with Kangaroos affiliate side Werribee and training at the club 1 day a week. Averaged 25 touches in the VFL that year and we all thought he was going to be a bit of a fantasy guru of the future but other than averaging 85 in 2017 he has been a little lack lustre. With the Kangaroos now playing a more fantasy friendly brand of football under Rhyce Shaw, at 25 years of age is this the breakout we have all been waiting for

Just beware his two tons this year have come against Adelaide and Melbourne who are the two bottom ranked sides for efficiency in their forward 50, with McDonald capitalising on the turnovers and rebounds out of defence. Next week he plays Brisbane who are first for efficiency inside 50 so things might be slightly tougher. The big positive to take away is he will head into Round 12 with a very low breakeven meaning if things do start to go pear shaped he will still be making you cash and be very easy to offload to another premium defender

The young defender who averaged 88 in his first two seasons of AFL fell out of favour at the Lions and spent 7 weeks in the dark during the front end of this season. Some injuries freed up a spot for him in the Lions back 6 just 3 weeks ago and he has taken it with both hands scoring 93, 89 and 91 for a 3 game average of 91 or 114 BCV.

Often tasked with taking the kick ins he will be a popular trade in this week with Daniel Rich set to miss again. There is some obvious fantasy potential in Witho when he is given the right role and while it might mean keeping a very close eye on him and where he is playing week to week, right now he is in red hot form and it would almost be silly not to ride that wave

A sloppy start to the year averaging just 64 in his first 3 games, Matt was dropped in Round 4 by new coach Matthew Nicks. He seems to have responded to it really well averaging 84 since then and bouncing back to the usual high disposal form we are used to from both the Crouch boys.

There isn’t a whole deal going right for the Crows at the moment so no extraordinary reasons to jump on Crouch, but for a bloke that has averaged 105+ across the last 3 seasons and is currently going at 105 BCV since being dropped in Round 4, you are picking up a very consistent fantasy midfielder who should be in a lot more teams than 1.1%. One that will definitely slide under the radar a little.

Paying $1.01 to be the most traded in player of the next week after the announcement he will see FWD status added to his name at the Round 12 DPP changes. Has had a little bit of an interrupted season but a 95 against the Hawks has shown he is over his hamstring niggles and has Carlton and Sydney in his next 2. Almost a must have this week or next.

Has had his injury troubles but a 78 followed by a 71 (equivalent of 98 and 89 BCV) has sparked our interest as a low 400k forward. A big bodied midfielder who was heavily touted as a potential number 1 Pick, he averaged 24 disposals in the TAC Cup and 21 at the U18 champs but he has struggled to make an impact so far playing just 24 games in his first 3 seasons. Rhyce Shaw’s new gameplan is definitely more fantasy friendly for the Roos and we have seen names like Simpkin, McDonald, Anderson and Dumont become semi-fantasy relevant. Could LDU now running free in the Roos midfield become relevant and join that list as a hidden gem up in our fantasy forward lines 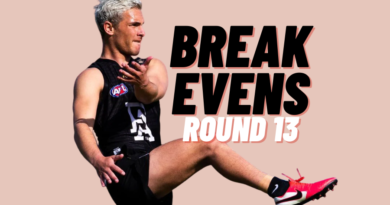 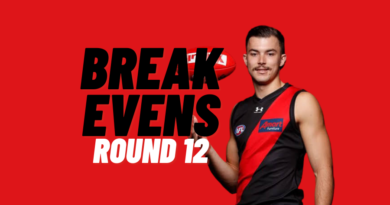