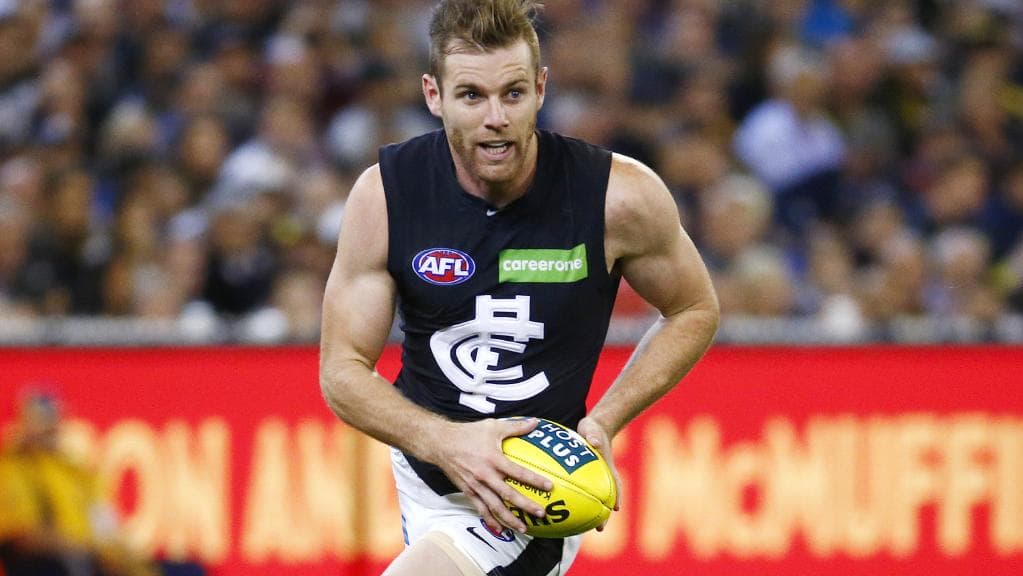 It’s been a tough two seasons for Sam Docherty, his teammates, Blues supporters and fantasy coaches in general. Thankfully, it looks like in 2020 the Carlton co-captain is ready to play at the elite level.

When fit ‘Doc’ is an elite defender in the game, who has the rare ability to cut teams apart with his damaging ball use by foot, but also is a difficult one on one matchup for forwards.

Docherty’s presence both as a defender and leader will be crucial for the development of the entire Carlton playing group let alone for a still young defensive core six. So how well is Doc travelling? Defensive coach Dale Amos had this to say on just how well he is going.

“He’s in fantastic shape… he’s training as well as anyone, and he’s back in full training,”

“We’re excited about what he’s going to produce over the coming weeks.”

“His growth has come from not being able to play: his leadership has grown because he hasn’t been able to play.”

Fantasy coaches remember with great fondness 2017 season of Sam Docherty. That year in AFLFantasy/DreamTeam he averaged 117, it featured 16 scores of 100 or more, with ten of them above 120. All year he had just the two scores below 90. In SuperCoach he averaged 115, that year consisted of 17 tons, ten over 120 and had only three scores below 90.

He’s far from a one-season wonder. While 2017 was scores in the territory of elite midfielders the season earlier he was still the best backmen going around. In 2016 he averaged 101, had 12 tons and four of these were over 120. While the ceiling wasn’t as high, the healthy scoring basement was on display with only two scores beneath 80.

The 2016 season was even stronger in SuperCoach as he finished the season averaging 108.5. Across the season he posted 16 tons, six of them were over 120, and he failed to score over 80 in just three games.

The big selling point for Docherty coming off the back of his injuries isn’t just around the potential scoring. It’s the potential value that comes with it. He doesn’t have to reach the 2016-2017 scores to be an excellent selection.

In AFLFantasy he’s priced as a mid-range 70’s average, while in SuperCoach and DreamTeam it’s the low 80’s. This means that at a worst-case scenario of an 85 average he’s still delivering value for investment.

There is so much upside around the possibilities of what we could get with Sam Docherty. And sometimes as a fantasy coach, we can get caught in the hype of a player and fail to do a proper analysis. However, that’s not like the Coaches Panel to get all preseason hype on someone. Let’s crunch the facts and data on the selection.

Whenever a player comes back from a severe injury like an ACL, we often see some scoring regression over the first twelve months. Whether it be a midfielder like Tom Liberatore a key forward in Taylor Walker or running defender in Brodie Smith, history gives us enough data to suggest the majority of players come back and score below what they did pre-injury. Additionally ‘Doc’ isn’t coming off the one, but rather two ACL injuries. While everyone hopes he does get back to his best as quickly as possible, expectations do need to be tempered.

Carlton is also a very different team with new players and a vastly differing game style. Back in 2016 & 2017, the Baby Blues were starting yet another rebuild. Rather than getting blown off the back week in and week out Brendan Bolton devised a game style to help protect them. It was a highly defensive style of play. Only twice in those two seasons did the Blues kick over 100 points in-game. This slow, methodical ball movement often centred around the experience in the back half of Sam Docherty.

Carlton no longer player under that coach, or it’s game style. What we saw under David Teague and anticipate he will allow in 2020 is a high paced, open game plan where players are encouraged to move the ball with speed into forward 50. Will this be a factor in curtailing some of Docherty’s scores? Maybe, maybe not.

The Blues backline the majority of the team has turned over in the past few seasons. In the backline, during 2016-2017 it was only Kade Simpson along with Doc that could be trusted to the ball well rebounding out of the defensive half. Now, they are stacked for options. In addition to these two, they have recruited Nic Newman and Sam Petrevski-Seton, both of which are reliable distributors of the ball by foot. Will one be used in a different role or higher up the ground? Possibly. But again, the Carlton team is structured differently to the prime time years of Docherty.

Right now, Sam Docherty is the most highly selected ‘top line’ defensive premium. In some coaches eyes, that makes him the perfect player to take on. Long time supporters of the Coaches Panel will know we often encourage and advocate for being brave, bold and calculated with your decisions. Is there a risk of going against him? Your paying for him at the value of around an 80- average with the potential of a 10-20 point increase. Additionally, there could be a reward if you choose to take him on, and he only goes 85-90, and with such high ownership, it would be a substantial reward that sets you away from the pack.

Only hindsight will guide you into what was the right call, but like with any selection, you make this preseason sure to count the cost, way up the risks and rewards and then make this best and most informed decision you can.

Currently, Sam Docherty is locked away for me in all forms of the game. The move to start him isn’t aggressive at all, but if he gets through the preseason games, it’s going to be hard to say no. Additionally, if Carlton shows the desire to allow him to be the general both as a leader and accumulator, then he’s arguably the value selection of the year.

He’s got the potential to be not just your D1, but the #1 defender across all lines. However, you shouldn’t use an opening few rounds selections on him. He’s the perfect no-risk D2 selection, and a selection from the fifth round or beyond is certainly acceptable.