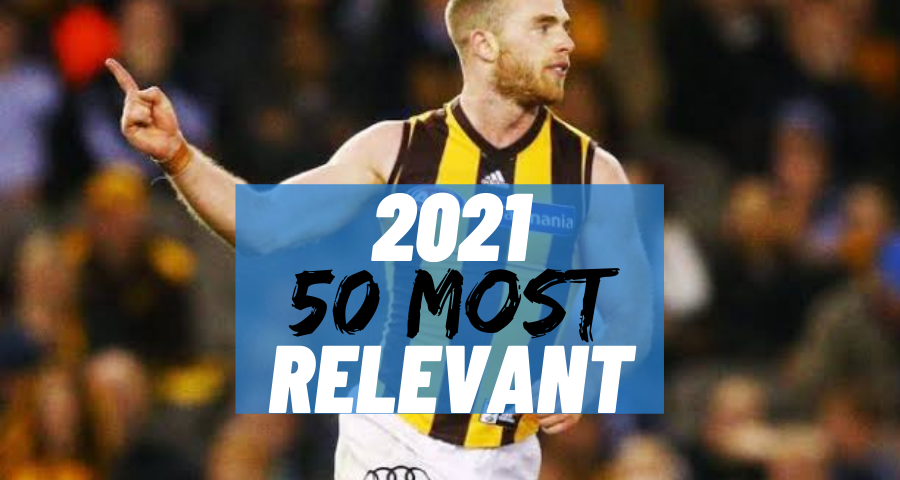 After returning from a horrific broken leg, Tom Mitchell put together a fine season. The question is, can he get back to averaging near 130 again in 2021?

After missing for the entire 2019 AFL season, the fantasy football community was excited to select Tom Mitchell. And while he didn’t return to the insane scoring heights of his Brownlow Medal winning 2018, ‘Titch’ still was a high quality performer.

From his 17 games last year he ranked 13th for total points in AFLFantasy and 20th by averages. Speaking of averages, he went at 86 (107 adjusted) and scored 5 tons plus 5 additional scores of 80 or more.

In SuperCoach he averaged 113, scored 12 tons with 5 over 130 and just one score under 83 all season. His 2020 season ended with him ranked 11th for total points, 10th by averages among all players.

If you’ve followed footy for more than 12 months then your familiar with that fact that ‘Titch’ missed the 2019 season after he broke his leg at Hawthorn training.

Across that season for SuperCoach he had only one game where his scoring dipped beneath 80. Mitchell reached triple figures in 18 games and had 14 scores over 120 and nine over 140. Two of those games were over 180 including personal best against Carlton. That game he had 46 possessions, nine tackles, two goals and 192 SuperCoach points.

Can he get back to this 2018 scoring for 2021? Because if he can climb back anywhere near that? There’s potential about 20 points per game of growth in him for AFLFantasy and 16 in SuperCoach.

You don’t have to be among the best fantasy football coaches to recognise that Tom Mitchell’s scoring ability across formats is unrivalled. For multiple years and at clubs he’s shown just how destructive a player he can be. When we consider fantasy footballers that if you don’t own them that they can destroy your season ‘titch’ is a certainty in that category.

I suppose the question then needs to be asked ‘if he’s so good, why is he not inside the top 10 most relevant?’ An excellent question, which has two reasonably simple answers.

Firstly, during the offseason, Tom Mitchell underwent a should reconstruction. Bizarrely, he initially suffered the injury in round one, but he still managed to play every game in 2020. Recently he spoke out that he’s ‘no certainty to be ready‘ for round one.

The positive is that he’s still able to get all the fitness base work set given you don’t need your shoulder to run. That’s important for him coming off a broken leg.

The second is about whether or not he’s got the capacity to get back to the uber elite days. Multiple years of 120+averages is elite, but remember these seasons were done without James Worpel and Jaeger O’Meara. For Hawthorn to rebound up the ladder it won’t be all won and down of Titch through the guts.

What do you need to see from him in the preseason to select him? Is it to play the AAMI Community series match? Is it to take and respond well to some heavy bumps and tackles in this game? You need to set up a clear path of what he needs to achieve for you to select him, otherwise you’ll allow confirmation bias to determine the outcome.

While I don’t think he’ll go back to being that 125+ performer again, I do have him across the formats averaging around 115. For me, in AFLFantasy and DreamTeam, that’s enough for me to start him. And should most definitely be on your upgrade plans in SuperCoach.

If he’s currently in your starting squad, then you need a backup plan. I’ve played fantasy footy long enough to know how this could go for you if you don’t. It plays out like this, you love the Tom Mitchell pick and your structure so much, but if he fails to play round one, you find yourself stuck.

All of a sudden your in one of 2 bad choices. The first, you settle on a lesser quality player that fits your cash range, but not your scoring prioritise. Or second, you destroy your entire preseason structure to amend this one selection.

To put it simply, have a backup plan. If Titch doesn’t get up for round one, what’s your Plan B? If you don’t know it, you need it. Otherwise, it could be a stressful and catastrophic decision.

The valuing of midfielders in the draft’s opening round is clearly the least I’ve seen in the past decade. As a result, Tom Mitchell and other topline midfielders will find themselves getting drafted marginally later than previously. I still have him ranked as a safe M1 selection and will fly off draft boards in the second round. Coaches won’t sleep on a player with his scoring capacity for long.