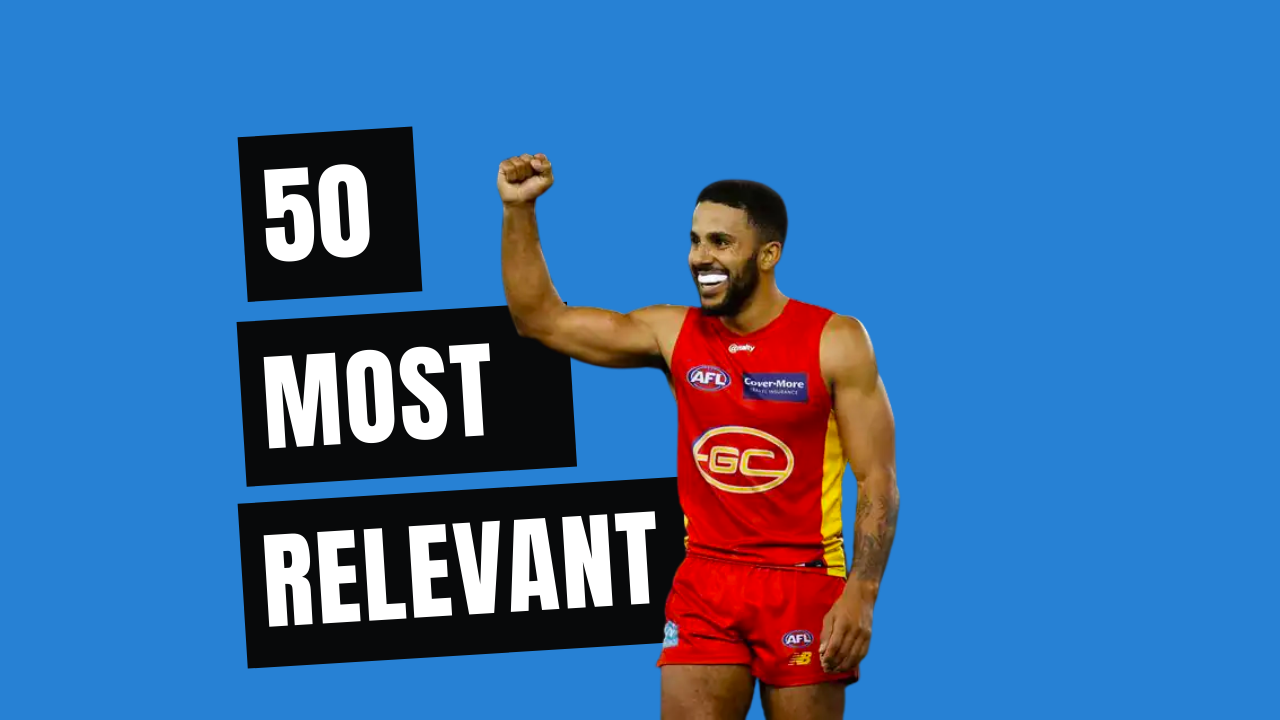 The emergence of Touk Miller from fantasy football premium to the uber elite in 2021 was something nobody predicted. Instead, the future Suns skipper was simply sublime. Although many may doubt the ability to back up the scoring, the signs are ominous if you want to beat against him.

Where the heck did that season come from? Touk Miller was simply sensaational in 2021. Longtime fans of The Coaches Panel will be familiar that Kane and I have been big-time advocates of ‘Touk Touk.’ So much so that getting him onto one of our podcasts several years ago became one of the highlights of the season. But outside of the few seasons where he held MID/FWD status and was pumping out high 80’s averages, Miller had rarely featured in any classic sides, and his relevance was relegated to draft and daily fantasy formats.

What makes him such a prolific scorer is his ability to score regardless of the variables around him is that he scores through multiple avenues. He’s ranked third in the league for tackles per game. That speaks to his high-end defensive abilities. He’s fifth for disposals and effective disposals, resulting in always having the ball. While he’s ranked sixth for uncontested and eighteenth for uncontested possessions. That means Miller uses his elite work rate to get into open spaces while also doing the hard stuff to win the ball himself. In short, Miller is one of the most rounded midfielders.

I don’t know what odds you would have got for Touk Miller to be the highest averaging player in AFLFantasy/DreamTeam in 2021, but you probably could have retired off the back of it. In addition, to be ranked first for averages, he’s third for total points. Not bad for a guy that missed a match. He scored seventeen tons; thirteen of these were above 12o while a monster six were 0ver 140.

To go with this high ceiling frequency is a strong score floor. He had just one match below 80 all season, which was in round one. So arguably, the best time to own him was between rounds 11-12, where he scored ten consecutive tons and averaged a mouth-watering 133 in that period.

His SuperCoach season was arguably even better. He scored eighteen tons from his twenty-one matches; an insane thirteen of these were above 120, ten over 130 and seven scores of 140+. He indeed was one of the most dependable VC/C options in 2021. He had sixteen consecutive tons to end the year and was ranked sixth for total points. Only Jack Macrae and Jack Steele had higher averages than Touk in 2021.

In his ten matches before the bye, he averaged 117 across the formats, while post-bye, he averaged 126 in AFLFantasy/DreamTeam and a monster 130 in SuperCoach. So any argument that suggests he’s priced at a ‘peak.’ He might not have the extraordinary monster games like a Macrae, Steele or my boy Kelly. Still, his frequency of converting scores over 120+ in AFLFantasy and 130+ in SuperCoach is insane. What further highlights this is that he scored triple figures across the formats; his average is 131. That’s as good as you get across the game formats.

One of the hardest players to rank in the preseason for me is Touk Miller. Not because he cannot and will not score well, but rather to forecast if he’s the top-end premium to take on or the one you’ve got to go ‘all in on’ and start. So what coaches are pondering is, was 2021 a picture of a new reality or just the unicorn season?

So what was the real cause of his growth? It came off the back of his elite endurance and high work rate. As a result, his scoring boost came in uncontested possessions and tackles. This workrate isn’t going anywhere. I’ve been lucky enough to have a little to do with Touk in the media. Outside of being an outstanding human being, what has been evident to me in my dealings with him was his insatiable appetite to get better. If the causation of the scoring bump was linked to his ability to work hard both ways, good like building a compelling case that he won’t score well in 2022.

The reality is, nobody should or can suggest that his scoring will drop off the cliff and regress to the 100-105 of his 2020 season. However, considering him as a starter, the challenging piece can be backed up with another 120 seasons. Historically, the trend is complex and rare. Impossible, no. But challenging. If he doesn’t average 120+ for the year and starts strong, coaches will have overpaid for him while others might be grabbing a significant bargain.

The question remains, though, what can we expect going forward for him and the entire Suns midfield unit. For me, everything fell Miller’s way this previous year. Matt Rowell was severely limited due to injury, while Lachie Weller and Hugh Greenwood missed time. Gold Coast does have a mightly talented list, but it’s also a young and inexperienced list. With some of these players returning from injury and more high-quality draftees emerging, I think that does eat away at Miller’s ceiling a bit.

Does the departure of Greenwood help or hurt? Hugh is a defensive beast, and his defensive pressure often allows other midfielders to flourish offensively. We saw this at Adelaide in 2017-2018 and have seen it at the Suns. Just watch him now do the same for Jy Simpkin. But does Hugh out force Touk to take on the defensive leadership in the midfield? What’s clear about him is he’s one of the most selfless leaders I’ve ever seen at a club. He’s bought un heart and soul at the footy club, and his deep desire is to elevate them to make a debut finals campgain.

As good as a footballer as he is, the ultimate rise of the club will come off the back of the emergence of Matt Rowell, Noah Anderson, Sam Flander, Elijah Hollands and others living up to their potential. For that to happen, space will need to be created. How much space will Touk create? Or is he the leader that paves the way over the next 12-24 months?

Currently shy of 10% of AFLFantasy and 14% of SuperCoach own him. Making him relatively unique given what his recent scoring history is. However, the percentages data feels too heavy for me to have confidence in starting with him. I see a regression, but I still have him in the 110-115 range. That should still be more than good enough to be a top-eight midfielder, but if my prediction is correct (regarding the Suns evolution), then starting him would be a mistake, however, on the flipside. If he doesn’t regress and starts the year the way he ended last year, going at 130. Good luck ever having enough cash generation to afford him.

Touk Miller is a clear first round selection in any draft format. Some might even advocate for him being the first player off the draft board. For me, that’s too early, but around picks four to eight, he’d have to be right in consideration.