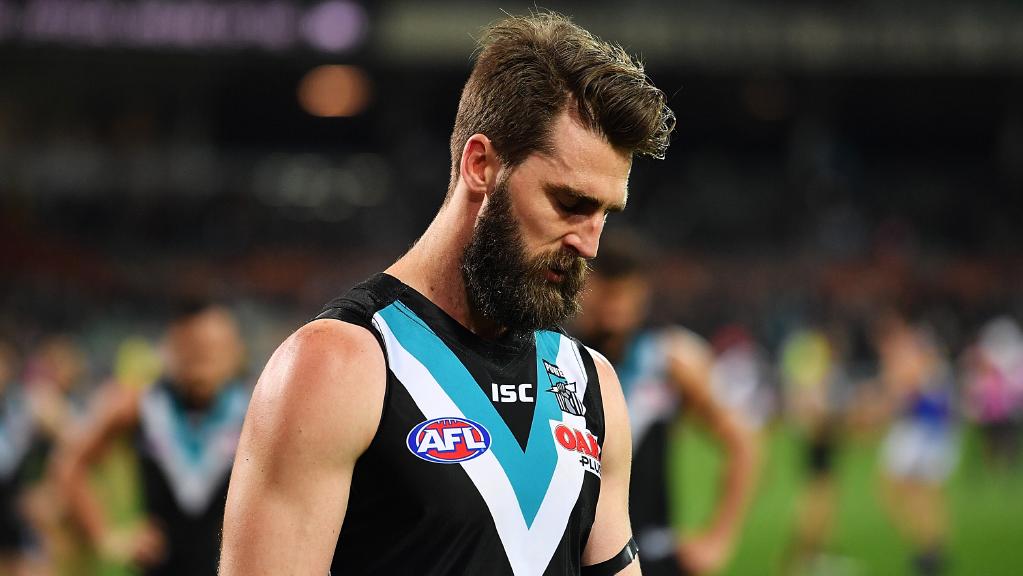 2018 for many reasons was a year for the Port Adelaide football club to forget. For Justin Westhoff, he was one of a handful of Power players that had a career-best season. One of the key strengths as a utility is his ability to play anywhere and any role something he’s thrived at for many years. Last year once Patrick Ryder went down and missed a handful of games he was required to take the ruck mantle, and while against some of the big boys he was outworked in the tap out he more than made up for it around the ground and delivered his personal best fantasy season.


Some will suggest that the only reason he had a ‘breakout’ season was due to his ruck minutes and while that is certainly a key factor there was still a number of games across the year where Ryder led the ruck and Hoff was barely used more than support role, which he’s done beyond just last year.

After coming back from injury only three times did Patrick Ryder score 100 or more in AFLFantasy and five times in SuperCoach. In these games, Ryder’s hitouts average were comparable to previous seasons, in fact, he didn’t drop below 30 hitouts. In these matches that he scored over 100, Justin Westhoff scored 115, 105 & 121 in AFLFantasy/DreamTeam and 116, 114, 120, 126 & 120.

While 2018 may feel like a ‘once off’ year regarding last year being the first time he’s averaged over the hundred it’s not the only year that his seasonal average has put him into premium territories. Between 2013-2017 in SuperCoach his seasonal averages were 98, 91, 94, 85 & 87. During the same stretch for AFLFantasy/DreamTeam, his averages were 87, 89, 89, 80 & 83. As an available forward selection, some of these years put him into the top 10 averages.

While starting with him given the new inclusion of premiership ruckman Scott Lycett and a potentially fit Patrick Ryder into the port side could likely spell curtains for any ruck minutes he doesn’t have to be in the ruck to score well again. Yes, his hitouts numbers were at career-high averages but outside of that, almost every critical other scoring column was on point to what he’d delivered over the past handful of years. While we never wish injury on anyone all it takes is for one of these two to miss a bulk of games and ‘The Hoff’ goes back into some ruck opportunities. That said, his history shows that he doesn’t require ruck time to score.

In the limited trade formats of SuperCoach & DreamTeam, nothing can derail your end of season rankings or finals push more quickly than running low or at worst being out of trades. While in February it feels a long way out, remember if you’ve played these games before at some point in July or August you’ll look at the trades remaining and realise you could’ve potentially blown your shot at leagues or overall rankings title. Once you’re left with minimal or no movement at all in trade column, the only thing you have left at your disposal is prayers for no more injuries and whatever squad depth you’ve built throughout the year.

His RUC/FWD status only further adds a critical key to the relevance for Justin Westhoff as he offers something no other ruck who’s capable of averaging over 90+ can provide, that is flexibility within your squad. The ability to target him as an in-season upgrade target and make him the perfect F7 & R3 cover. This DPP link could be the difference between a doughnut and a rankings drop off or significant league loss.

Let’s talk worst-case scenario; he falls back to his mid 80’s seasonal averages, that’s still a more than a handy option as a ruck coverage or on field depth option inside forward 50. And that’s the worst case scenario, best case he keeps on going as he did in 2018.

Right now he isn’t a starting squad option for me, but he sure as heck is on the midseason upgrade list. I want to see the role and the impact of the other Power talls before jumping on. One thing is for sure that DPP link is a gold mine and even with a scoring drop off he could win you some crucial matches.

If you’re drafting him based on last years seasonal averages, then he deserves to be taken in the second or third rounds. However, rightly or wrongly the fantasy community at large seem to believe he’s more than likely to drift back to the previous season’s averages and go mid 80’s as his peak.

His DPP link is priceless given he could be your R1 or an F1and gives you plenty of flexibility later on in the season let alone a great variable in what you select later on for draft day. Personally, if ‘Hoff’ is still there after the first 40-50 odd selections, it’s very hard to pass up and probably needs to get picked even if you predict a major drop off.