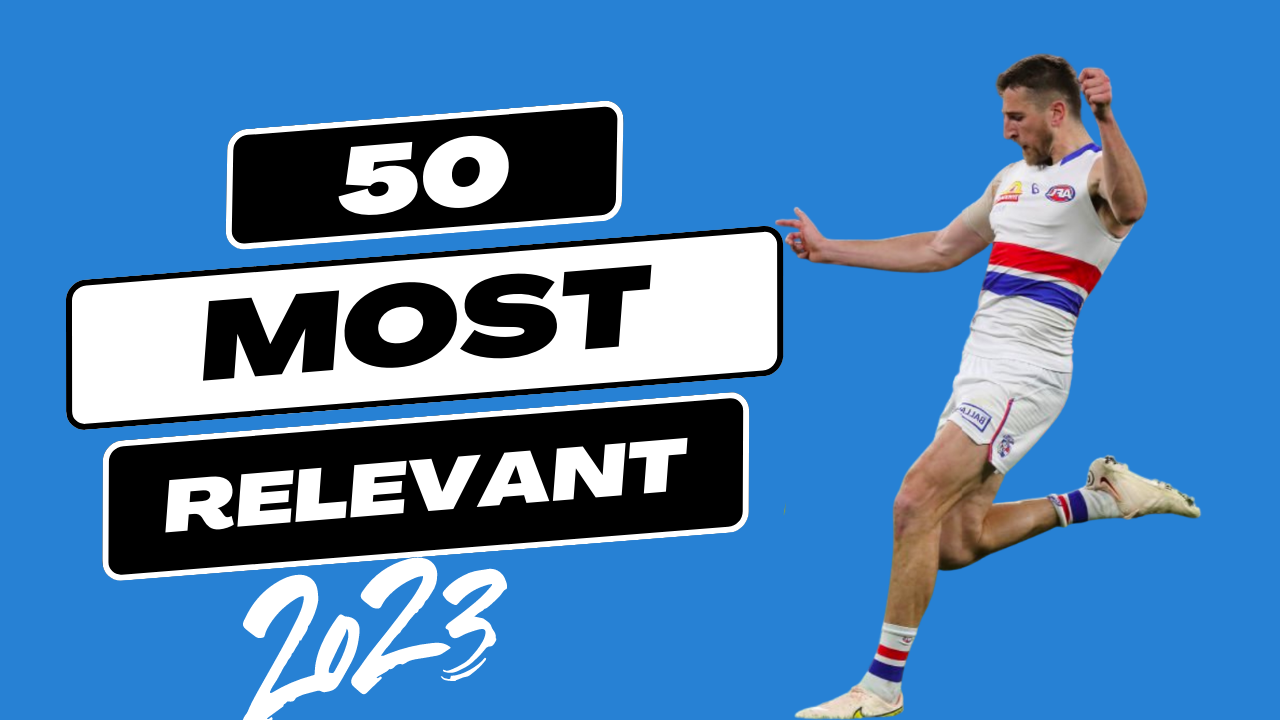 In 2015 Marcus Bontempelli achieved a rarely-seen feat of becoming a fantasy premium in just his second season of AFL. Since then, ‘Bont’ has been a premium midfielder and a staple of our fantasy sides. As he enters 2023, is it business as usual? Or will we see something change?

When you look back over the AFL career of Marcus Bontempelli, if it doesn’t end with at least one Brownlow Medal, it’ll feel like a crime against the award. He is everything that’s great about our modern-day AFL player. He’s strong, clean, versatile, powerful and fast. He doesn’t waste a movement or action on the ground and deserves his place as one of the best players in the league right now.

Despite a ‘down’ season in the eyes of many, he still finished the season ranked inside the top five of the AFL for goal assists, inside 50s & score involvements. Even in the fantasy world, we saw a solid season. He ranked 17th amongst midfielders by average and 23rd for total points in AFLFantasy/DreamTeam. For SuperCoach, he was the 6th highest-ranked midfielder by average and 11th for total points. I’ll take that from a ‘down’ year. It was even more impressive when you remember that he was eligible as a MID/FWD when he gained DPP ahead of round six.

Looking into his 2022 year with more detail in AFLFantasy/DreamTeam, he scored eleven tons, just the two over 120, but his scoring dipped under 80 just once all year. We saw again last year a trend that we’d seen across most of his career. This format’s all about timing the ownership run with Bont. From round nine til the season’s end, he averaged 103.4 over the final fourteen games of the year. The peak being between rounds 14-19, he averaged 113.

From his 22 games for the 2021 season in AFLFantasy/DreamTeam, he scored 16 tons, with 50% of those going at 120 or higher. Four times he scored over 130, and he had just three matches all year where he dropped under 80. By the close of the 2021 season, he ranked 14th for total points, and his average of 107.8 ranked him 18th in the game. At first glance, some might not be uber excited by those numbers, but players who owned him or those that bother to look into the data should be genuinely excited by his scoring. During the year, from rounds five to sixteen, he scored eleven consecutive tons, averaged 120 and had the lowest score of 102.

As strong as he was in this format, he’s another level of dominance in SuperCoach. Of the sixteen times he scored 100, twelve were above 120, eight were over 130, and an insane five were 145 plus! To go with this near-ridiculous scoring ceiling is a low variable scoring basement. Just once, he dipped his scoring beneath 80. He wrapped his SuperCoach season as the fifth-best points performer, with only Jack Macrae, Jack Steele, Clayton Oliver and Max Gawn scoring more than him. His average of 119.7 is the sixth-best in the game.

The evidence is conclusive and backed by multiple years of data. He’s one of the best uber-premium midfielders for SuperCoach, and when you get the timing right in AFLFantasy/DreamTeam, he’s got the capacity to match it with the best of them. Additionally to his scoring is the consistency he holds regarding availability. Bont is one of the most durable players in the game. He has missed one match in four years and only six games since 2015. When you combine his scoring capacity and availability, it makes for serious consideration for someone to start within 2023.

What makes Marcus Bontempelli one of the most feared players in the AFL is his ability to be damaging at any position on the ground. At centre bounce, his work is elite and is just as damaging as the first-touch clearance midfielder as he is the finesse player delivering it inside fifty for the Dogs. Around the ground, he’s a strong overhead mark, penetrating left foot, and, if asked to go forward, is a handful for even the best defenders. Honestly, the only apparent discrepancy is his occasionally wayward set shot at goal, but in reality, it’s nitpicking. He’s nearly impossible to stop, and his poor games are rarer than St Kilda’s premierships.

He’s a stronger SuperCoach candidate than any other format. With averages of 114, 116, 119.7 & 116, it’s evident that this is the case. He genuinely is a starting squad option, as his volume of ceiling scores makes him a captaincy option in most games. If he’s not someone you are considering, and you play this format, then you’re doing it wrong. He doesn’t even have to ‘improve’ to be a safe top tier midfield premium, he’s gone 114+ for the past four years!

In AFLFantasy/DreamTeam, he’s now shown the ceiling over stretches of games that could make him a legitimate top-tier option. But the challenge that does prevent coaches in these formats is the need for more frequency of high-possession games. Bont isn’t a stats-stuffer type of player. Instead, he’s an impact-per-possession player.

The other challenge to his scoring ceiling in DT and AF is around the midfielder’s mouths to feed the Bulldogs. They do a good job of sharing the points around. Still, with ball magnets like Jack Macrae, Bailey Smith, Adam Treloar and even Tom Liberatore in the side, it’s hard to see his possession stat line having a boost to give me confidence he can elevate his game for the season north of 110.

One potential avenue for upside is the Dogs have gained some further support in the forward line through Rory Lobb. He, alongside Jamarra Ugle-Hagan and Aaron Naughton, should provide the tall timber required for the sons of the west. Then guys Cody Weightman, Rhylee West and Robbie McComb can do the heavy lifting as the smalls. So all of a sudden, where Bont was forced to play forward due to necessity, it can now be a luxury and matchup move.

Safe, reliable, durable and dependable. Those four reasons are enough: even if you’re not considering him in your starting squad, he’s an absolute must-watch as an upgrade target during the season.

Each format of the draft games will require a different ranking position for Marcus Bontempelli. In SuperCoach, he’s a solid M1 and will be off the draft board in either the second round or a very late first. AFLFantasy scoring I’d be targetting him at M2, making him a third or early fourth round selection.