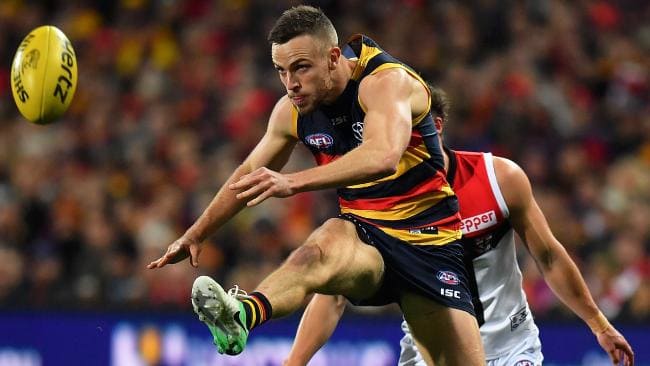 The Crows dashing defender was desperately missed for most of 2018, and while for some coaches he’s placed on the ‘never again list’ for the coaches that do select him I can see him playing a valuable role.

The Crows injury curse started in the qualifying final in 2017 against GWS, and it was in that game Brodie Smith injured his ACL and missed not only the rest of the Crows finals campaign but the vast majority of 2018 season. The positive of this for fantasy coaches is he’s priced cheaper than he’s been for several years and no longer does he have to be a top 10 averaging defender to select him.

It’s dangerous sometimes to go too many seasons back in averages, but it is worth reminding ourselves of his scoring pedigree. In 2014 a year he was honoured with All Australian selection he ended the year with a SuperCoach average of 93.5 including nine scores over 100 with 3 of them over 130. For AFLFantasy coaches that season he averaged 82 and hit the triple figure mark in 7 matches.

When fit and firing Brodie Smith is one of the most damaging run and carry players in the league let alone at the club. He possesses a booming and accurate right foot, and has plenty of speed to burn. In his game against the Giants, he showcased precisely what the footy club had missed all year with 29 disposals, six marks, six rebound 50s and a team-high 599 metres gained.

Of more recent seasons he’s struggled to hit those fantasy defensive premium heights consistently of his All Australian season where he was a good fantasy premium. The key is, we’re not paying for him at the price tag of an 80-90 average defender, nor while a possibility especially in SuperCoach we are not likely to keep him. We are paying to own him at a considerably less price than what he’s consistently delivered and coaches that select him to have a straightforward strategy at play.

Brodie Smith is one of the best pure defensive stepping stones this season. He’s set to generate cash plenty of cash for you this year and also bank you a ton of points on the way through. The only real reason your choosing to not seriously consider him, even just as a JLT Community Series watchlist is because in 2019 you’ll be ignoring any stepping stone options in the backline and opt for only a Guns and Rookies approach.

For me, he’s in all my sides currently in every format, and it’ll take some effort to dislodge him. Indeed, we’ve got plenty of stepping stones to consider, but for me, I think he’s one of the best.

Another interesting selection based on his previous history of averages would be likely to place him as a D4 option in AFLFantasy/DreamTeam depending on the depth of your league squads and teams. For SuperCoach historically he’d go at about D3 but due to his you may be able to get him a position later than that at D4.