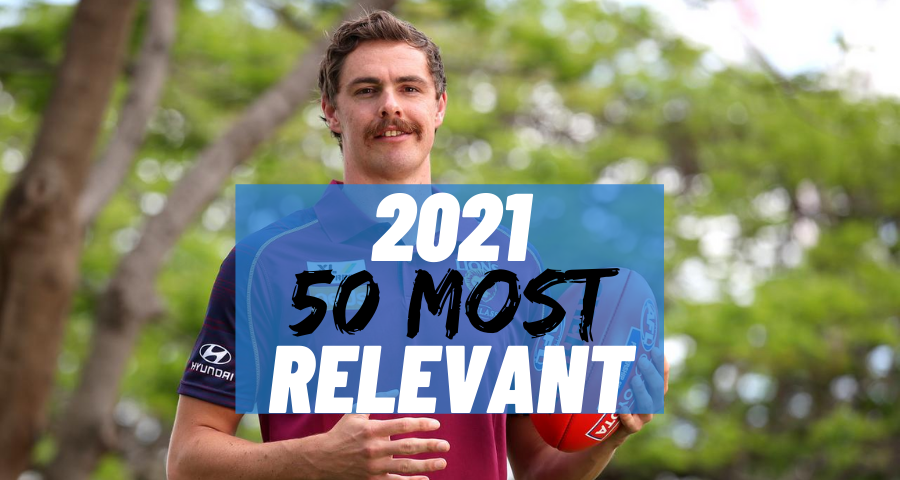 Just twelve months after his failed attempt to depart Essendon, Joe Daniher has finally got the football restart he wanted at a new club. At Brisbane, can this son of a gun bounce back to his scoring best?

It’s an understatement to suggest that the past three season for Joe Daniher haven’t exactly gone to plan. Since 2018 the key position forward has played fifteen of a possible sixty one games, with a season high of seven games in that period of time.

The reason for missing multiple games across each season is simple. Injury. Since playing 22 games back in 2017 has battled through osteitis pubis and along the way has had numerous setbacks. What long term and consistent injuries do to fantasy coaches is two things.

Firstly, it scares people off selecting him with the belief that history will repeat itself and that Joe will be moments away from his body, breaking down. Second, and more importantly, is it makes us forget the talent and ability of the player.

Despite just four games last season, it was in round 14 we got a reminder of his ability to impact a game and deliver. In that game against the Hawks, he took ten marks, five were inside 50 and three contested. He had eight score involvements, kick 3.3 and finished the game with a 103 in SuperCoach and 85 (adjusted 106) in AFLFantasy/DreamTeam.

These score echo that what he was able to score in 2017. That year he played every game, and in SuperCoach he averaged a career-best season of 86. That 86 included going 90+ on nine occasions, six times over 100, including a five-goal haul and a 124 point match against the Eagles.

While in AFLFantasy/DreamTeam coaches he boosted his previous seasons average by 13 points up to a best of 85. That seasonal average included 11 scores north of 90, including 6 tons.

Like all key positions forwards he does require bags of goals to accumulate his scores, it’s important to note that from his 22 games he kicked 3 or more goals in 14 matches. Not a bad conversions rate. Thankfully, the Lions don’t just intend to plonk him inside forward 50.

Brisbane have declared publicly on multiple occasions they intend to use Joe as a relief ruckman to big Oscar Mcinerney. This is good news, as Joe’s previously rarely been used outside of forward 50 continuously. If this role eventuates, Daniher will now have a whole new realm of scoring available to him.

No longer will his scoring be entirely linked to his ability to kick bags. Now he’ll have centre bounces, stoppages and through the ground general play to boost his scoring.

Speaking of the Lions, the club has been able to do wonders for other players that have struggled to get consistently onto the park. A quick look back at former Cat and now Lion Lincoln McCarthy would remind us of his physical transformation since moving clubs. Between 2017-2018 he played just five games for Geelong, but he’s played 37 of a possible 39 home and away games since being a Lion.

The story is similar to Grant Birchall, in 2018-2019 at Hawthorn, he played eight games. While in his one season at Brisbane he played 14 of a possible 17 games. The medical and conditioning staff at the Lions should be applauded for the work they’ve done. Given their current history, I’d be backing them in to get Joe back to full health.

At his starting price point, he’s more than half that of Steele Sidebottom and Patrick Dangerfield. That’s some huge potential upside if he and his new Lions can get off to a strong start. If you’ve tried to build a team at the moment, you’d quickly realise that significant value is needing to be found on multiple lines to feel like you have a side that resembles competitiveness. Players like Daniher will play a valuable stepping stone role in 2021.

Speaking of the half, Daniher ‘s SuperCoach average last year 48 was approximately 40 points beneath that which he delivered in 2017. While in AFLFantasy it’s nearly 25 points per game. That’s supreme value if he can return anything near that this season.

One of The Coaches Panel’s regular mantras is that every game’s format requires a different strategy. Sometimes it means certain players are only relevant in a single format. While for others, they are genuine candidates no matter what.

In the case of Joe Daniher, it is SuperCoach that he’s at his peak of return on investment. There he’s priced just $30,000 over new bulldog Jamarra Ugle-Hagan. In this format, the risk is almost non-existent at that price, for that financial output you’re getting a proven commodity when normally you’re getting some untried.

Joe’s still worth considering in AFLFantasy and DreamTeam, but the question coaches will need to ponder is ‘can I get a comparable scoring output for a player with less risk at a cheaper output’? Furthermore, even with some ruck time, talls notoriously have a large scoring variance. From any week it could be 100 points depending on how often he converts his chances.

I like the inclusion of Daniher into the Lions side because he should get himself better opportunities to convert on the scoreboard due to that star-studded Brisbane midfield. For years his former side has lacked the clearance ball winners that have enabled a quick inside 50 entry, especially from the centre bounce.

With Lachie Neale, Dayne Zorko, Jarryd Lyons, Hugh McCluggage and Jarrod Berry rotating through the middle that won’t be an issue anymore. Given Joe’s marking strength both in contests and on the lead, we should see countless quick entry opportunities.

Brisbane have their scheduled bye in round 13 right in the middle of the MBR’s. That provides coaches that do start him with the opportunity to play him for the first twelve weeks, and then flip him to a premium forward coming off the bye.

Players like Patrick Dangerfield and Toby Greene as arguably the most prominent scoring candidates. Other options could be Connor Rozee, Jack Ziebell or Zac Butters. All will score well in 2021 if given the midfield minutes to succeed.

The elephant in the room is his durability, and on recent form at Essendon, coaches can have zero confidence he can get through a full season. Thankfully, as a fantasy coach, you don’t need him too. Anywhere from 6-12 weeks is what you need.

With a player like Joe, you need to identify why you won’t start him. Is it because you believe at his new side he won’t score well? I’d propose that a forecasted scoring dip isn’t a founded reason to pass in him. That’s an unfounded assumption right now.

Is he priced too awkwardly (especially in DT/AF) to given you the cash generation and scoring your looking for? Does he not fit your starting squad structure or strategy? Do you believe you can get a better performer cheaper? Certianly I’d be much more easily convinced to endorse these reason as to why you’d miss selecting him.

The major reason across formats to rule out Joe is his durability. It’s certainly a factor. If that’s the reason for passing then my encouragement for you would then be consistent with that across your squad. So that would mean missing on guys like Josh Kelly, Lance Franklin, Toby Greene and Zac Williams who all have a poor ‘injury history.’

Don’t pick and choose reasons for some and not for others, be consistent across how and why you choose the players that you do.

SuperCoach is an easy decision for me. If Joe Daniher gets through the preseason unscathed, then he’s a lock in my starting squad. At the price point, I see no risk. In AFLFantasy he’s still on the watchlist, while DreamTeam I’m likely to pass.

Similar to yesterday’s player revealed Lance Franklin, Big Joe is a perfect mid to late teen rounds of your draft selection. Here, coaches often look for flyers and value picks, which can have a minimal negative impact on your year.

At best, he flies and becomes a draft bolter that establishes a strong season for you. Conversely, he is a late round pick you discard into the pool which is common in this portion of draft day.