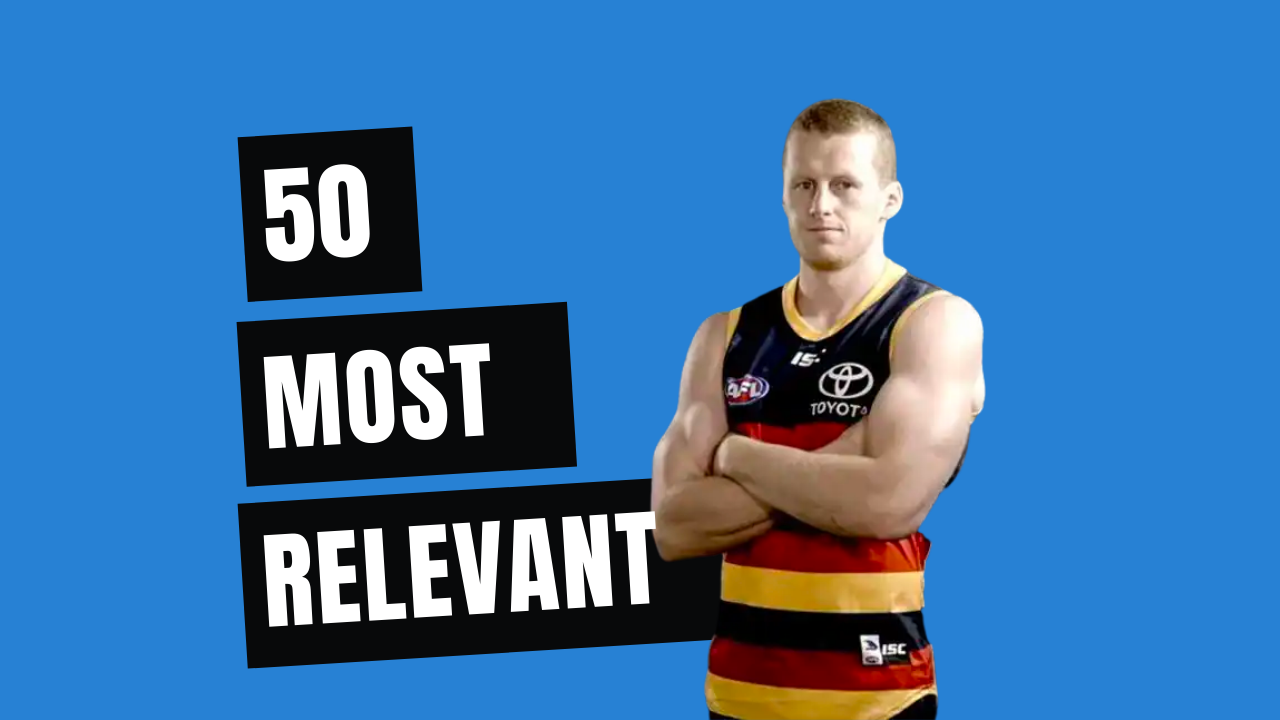 Twelve months ago, Reilly O’Brien was on the verge of becoming the next big fantasy footy ruck. However, after a disastrous season, he’s slid away from many coaches radars. But not for long. For many reasons, ‘ROB’ kicks off the 2022, 50 Most Relevant series.

Entering into last season, many coaches were bullish on Reilly O’Brien. It wasn’t unfounded hyperbole; it was merited. ‘ROB’ was on the trajectory of becoming the next big fantasy footy ruck. However, things didn’t go to plan. The positive news entering into this new season is we are not paying for him at the 2020 price point but rather at some potential value. He’s now priced 10 points per game cheaper in SuperCoach and 18 points per game cheaper in AFLFantasy/DreamTeam.

Even with some up and down scores, ROB still managed to show that his 2019-2020 scoring wasn’t just a moment in time that’s passed. He delivered five AFLFantasy/DreamTeam tons, including 135, 129 & 111 as his three top scores of the year. Additionally, he pumped out a further five scores between 81-97. If 50% of your game are scores of 90 or higher in a bad season, then that’s a positive sign for those chasing value in starting squads. Over his first ten games of the season, he was averaging a putrid 77.8. However, in the final ten games of the season, he averaged 94 and had only two scores below 87 in that stretch. So even without changing much from last season, you’ve already got 10 points per game of potential value.

In SuperCoach, he averaged 96 in a ‘poor season’. And yet still managed to deliver nine tons, including four scores of 133 or higher. Furthermore, he had an additional three scores between 90-99. Like in AFLFantasy, he had a slow start but built as the season progressed. Over the first ten rounds, he averaged just 85, but over the final ten games, he boosted his average to 105. O’Brien averaged and scored more than Brodie Grundy during the last ten games.

Cast your mind back to the end of round one. Do you remember what your rucks scored? In the opening round, every ruckman of note failed to score. Early on, the ‘stand’ rule created less congestion and see-saw many rucks take multiple games to get going. Yes, ROB took longer to get going than we’d like, but he wasn’t alone as a slow starting ruck. The disappointment of 2021 is real, but the scoring potential of the 30 games previous the year should remind coaches of his pedigree.

Remember 2019? He burst onto the season and averaged 95 across the formats. That’s near-identical to what he delivered over the back half of this underperforming season. Between 2019-2021 there’s a poor ten game stretch, but beyond that, he’s shown that a 95+ average is closer to his typical base. Positively, as owners from 2020 will recall, the upside is significant.

From an AFLFantasy perspective, in 2020, he averaged 86.7 Avg (108 adjusted average) and scored 6 tons and five additional scores 80+. Due to the shorter quarters, AFLFantasy coaches treated 80 as 100’s in 2020. In this game format, he ranked 10th for total points scored and 17th for average. While in SuperCoach, he ranked as the 20th best performer across the competition for averages and total points. He averaged 106 across the year; it included 9 tons, 4 of which were over 120, and he dipped his scoring below 82 in just one match all year.

For rucks, it can take well into the mid-’20s before they hit prime performances. Look at Max Gawn. It was his 2016 when at 25 years old, he hit his peak. That season he averaged 106 in AFLFantasy/Dreamteam and 118 in SuperCoach. Could he reach these heights at 26 this season? Possibly, but regardless, O’Brien offers value and has a history of consistent premium performance.

If you were bullish on him last year, then at the very least, he must be someone you consider on your watchlist. At worst, he holds scoring form and price point. At best, your dreams of high scoring from twelve months ago get fulfilled but at a fraction of the price. At his price, he must be a variable worth considering.

What was the primary cause of the scoring regression of Reilly O’Brien? By identifying this correctly, coaches will either strike gold in value or avoid another season of potential frustration. Ultimately, there are several primary schools of thought. One, he was battling a nagging injury. Two, he was drastically out of form. Third, the Crows game style destroyed his scoring, or four 2019-2020 were outliers. Or lastly, a combination of all.

Nothing officially was ever revealed during the season, but the murmurings of ROB battling nagging injuries were floated all season. He constantly seemed to be physically limited with his back. However, it wasn’t until late that he missed multiple games with a knee injury.

The positive for the Crows is it allowed them to have a few games of AFL experience into Kieran Strauchan. Granted, he was impressive against Max Gawn and Todd Goldstein, but in reality ‘Straunchie’ is still the clear apprentice. So please don’t buy into anyone’s narrative that he’s not the top ruck at West Lakes. The #1 ruck spot is ROB’s are nobody else is close. Adelaide also won’t play ‘2 rucks’ like West Coast, St Kilda, or Melbourne. The club is more than happy to use gun youngster Riley Thilthorpe as the relief ruck.

One of the most significant reasons to select O’Brien in your starting squad is his obvious starting squad value. Not just because he has the potential to match the top tiers of rucks, which he does. But because of what starting him over others allows you to do in other positions. Champion Data has gifted us three MID/FWD’s that all have the potential to average 110 next year in Mitch Duncan, Josh Dunkley and Tim Taranto. Can you afford not to start two if not all three of them?

Additionally, Touk Miller, Jack Steele and Jackson Macrae are all genuine candidates to be the top scoring midfielder of the season. Can you afford to miss more than one of these for the majority of the season? If either of them starts 2022 the way they scored in 2021, then you’ll never be able to afford them. Starting with Reilly can allow you as a coach some great financial flexibility to get the premiums in other lines that can quickly take seasons away from you.

Over the past few seasons, we’ve almost had to start both Brodie Grundy and Max Gawn because they’ve been so far and above the best scoring rucks. But throughout 2021, we saw trends of the game pivoting away and ruckmen scoring slowly decline. If you subscribe to the rucks scoring not being as dominant, then ROB being ‘close enough’ to the big rucks this year, then might just be good enough in 2022 to make starting him of high value.

I do believe Reilly can get within 5-10 points per game of the top rucks for a stretch of games. Remember twelve months ago, many in the community had confidence that he’d be a top two averaging ruckmen. In his first six games of this year, he faces Freo (Sean Darcy), Collingwood (Brodie Grundy), Essendon (Sam Draper), Richmond (Toby Nankervis) and Western Bulldogs (Stefan Martin/Tim English). It’s not horrific, but it’s also not simple.

Coaches might also see his round thirteen byes as perfect to meet a need in their starting squad. In round 14, we’ll be without Brodie Grundy, Max Gawn, and Sean Darcy, all unavailable this week. For some teams, this could help their starting squad and trading structures.

Another possible hesitation in selecting O’Brien is linked to the development of the execution of the Crows game style. It was clear that under Matthew Nicks they want to move the ball fast through the midfield and do that with a daring run and carry movement in addition to taking on the 45-degree kicks to open up the ground. As a result, Adelaide now has arguably the most dangerous wings in the competition, with Paul Seedsman being joined by Jordan Dawson. The club can also run Wayne Milera, Lachie Sholl and even Brodie Smith.

In 2020 when he dominated the scoring, it was often used as a stop-gap to hold possession as the Crows were looking to stop the bleeding to opposition teams. He’d also sit in the defensive 50 holes and take marks. Do the faster ball movement and the likely club improvement again this year render some of his scoring ceilings?

O’Brien is the perfect candidate to kick off the 50 most relevant for 2022! There’s a narrative where I can see him pushing back to his 2020 scores and being a genuine top two averaging ruckmen. But, equally, I can see a world where he’s close enough but is always giving away 15-20 points per game away each round to the top tier rucks. At the very least, he needs to be a vital consideration for your starting squad. Starting him could be the perfect piece to building towards success in 2022. For me, He’s right in the mix in several formats.

Twelve months ago, if you wanted to own him, you’d be forking out a late first or second-round selection. However, with the rise of Sean Darcy and, to a lesser extent, Rowan Marshall, he probably finds him the fifth or sixth best option in the ruck in some coaches’ minds. So once the clear 90+ forwards/defenders are all off the board, if you’re looking for a none midfield selection, then he’s on the radar for me.

Unless the draft format/structure you have requires more than twelve on-field rucks, I can see coaches comfortably getting him in the 5th-7th rounds of a draft. Reilly O’Brien isn’t someone I’d extend and reach for, but also, he’s got the potential to be a 100 averaging ruckman across the formats. I believe he’ll return to the 95+ ruck averages in AFLFantasy, and I’ve got him ranked #3. In SuperCoach, I think he’ll average above 100, and I have him ranked 5th for rucks.

I still have Brodie Grundy, Max Gawn, and Rowan Marshall in keeper leagues ahead. But after that point, I’ve got him and Darcy in the same tier of ruckmen. And given the durability and data, you’d have to lean towards selecting ROB over Darcy.