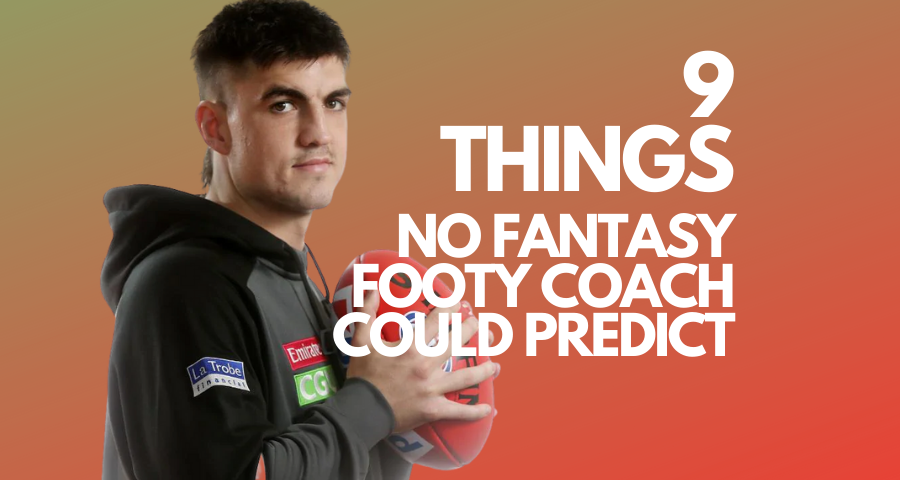 1. Matt Rowell would be THIS good

Let’s be honest. We knew Matt Rowell was going to be good. Every recruiter and under 18 talent scout watcher was adamant that he is a generational talent. After the phenomenal debut season of Sam Walsh last year as fantasy coaches, we all would’ve settled for replication of what the Carlton young gun delivered.

What Rowell has delivered is up a whole new level! In SuperCoach he’s averaging 126 and is currently the fifth-highest scoring player in the competition. Only Lachie Neale, Todd Goldstein, Brodie Grundy and Sam Docherty have scored more than him. For AFLFantasy/DreamTeam he’s the tenth highest scoring player and averaging 88. On the surface, that doesn’t feel as impressive but don’t forget the scoring differences between the formats. The shortened quarters don’t impact the total amount of points available in SuperCoach. However, in AFLFantasy and DreamTeam, the 16 minute quarters has meant they have 16 minutes less of ‘regular’ footy available to be played.

Well played Matt, we didn’t know if anyone would ever again reach the heights of Walsh, but it looks as though you have not just matched the but exceeded it.

As the 2019 season came towards an end, it was clear that premiership Tiger Dan Butler would be seeking a trade. For a long time, it appeared that Carlton was his likely destination. However, he settled on a move to St Kilda. In his 42 games as a Tiger, he had just two scores over 90 across all formats of the game. His career-best averages where his debut year with 56 in AFLFantasy and 60 in SuperCoach. Since becoming a Saint, he’s picked up some midfield minutes and is scoring like a beast. An average of 76 in AFLFantasy and Butler is ranked ninth for total points for all forwards. While in SuperCoach he’s averaging 106 and ranked sixth for total points ahead of other popular premiums in Isaac Heeney. It’s the breakout that nobody saw coming.

3. The Ruck Scoring Dominance In SuperCoach

Some might call it a broken scoring formula, but you want as many rucks as possible on the field in 2020. Last year, only four rucks averaged 100 or more. Brodie Grundy, Rowan Marshall, Max Gawn and Todd Goldstein led the charge all averaging over 110, with Jarrod Witts just missing out with an average of 99.7.

It’s only a sample size of four games, but clearly, rucks are the principal beneficiary of the shortened games. Currently, nine ruck eligible players average 100 or higher, four are higher than 120, and three are above 133. Lachie Neale is the only player without ruck status that is averaging over 120. Additionally, two other ruckmen average 99, and even RUC/FWD Jon Ceglar is currently averaging 94 which ranks him 14th for ruckmen, but as a forward he’s 15th.

4. Only Four Players Would Average 100 or More in AFL Fantasy

The shortening of quarters to 16 minutes was always going to mean we’d see a drop in scoring. However, I’m not sure we’d think it was this drastic. Last year 29 players finished the season with a triple-figure average with nine over 110. It might only be a small sample size, but as it stands just the four players currently average over 100. The number though, can be deceiving. One of those is Luke Dunstan. He scored 100 in the opening match of the year but hasn’t been picked for the Saints since. The other three players are Andrew Gaff (102), Brodie Grundy (103) and Lachie Neale (116.5).

The GWS Giants have been one of the highest-scoring fantasy footy teams over the past few seasons. Entering into the year the preseason discussion among coaches was around how many of their midfield premos would be in the top-scoring players. A case could’ve been made for Stephen Coniglio, Josh Kelly and Tim Taranto to all have been a top 10 performing midfielders. The addition of forward status for Lachie Whitfield meant he loomed as a highly owned prospect.

A number of coaches correctly identified that Nick Haynes flew home last year across all formats of the game, but I don’t see any coach that would predict that after four rounds he’d be the clubhouse leader for the Giants. In SuperCoach he’s 12 points ahead and in AFLFantasy/DreamTeam it’s 26 of the nearest rival in Harry Perryman.

Over the past few seasons, Collingwood has been one of the highest-scoring fantasy footy teams. Scott Pendlebury, Steele Sidebottom and Adam Treloar have been staples of our midfield for years while Jack Crisp’s 2019 season meant he’d be a candidate for a top 10 defender entering into 2020.

Over the past few seasons, Brayden Maynard has been a mid 70’s averaging player, which while not enough for salary cap coaches has seen him still be a handy player in draft formats of the game. However, in 2020 where up is down, Maynard is proving to be one of the best players in our backlinks. He’s currently averaging a career-high 85 in AFLFantasy and SuperCoach; it’s even better, he’s currently averaging 113 which is 33 points up on last year. Across all formats ranked third for total points with only teammate Jeremy Howe and Sam Docherty scoring more.

7. Patrick Dangerfield is Averaging under 100 in SuperCoach

Ever since his famous trade from the Adelaide Crows, Patrick Dangerfield has been a staple amongst the top averaging players. Since 2016 he’s averaged 130, 136, 121 and 115. Entering into round five of this season he’s had just two tons and currently averages 99. A 140 this past week against Melbourne and with the dreaded Matt De Boer tag already in the rear vision mirror it’s a safe bet that he won’t have an average this low again for the rest of the year.

8. Lachie Whitfield Is Outside The Top 40 Forwards

OK, maybe I’m starting to stretch the limits of friendship. But let’s be honest, if I told you during the preseason that more than 40 forwards would have scored more than Lachie Whitfield by the end of round four. Chances are I would’ve been laughed out of the room. Whitfield by average, is currently ranked 41st in AFLFantasy/Dreamteam (58.3) and 49th in SuperCoach (74.8). Some of the blame does rest on his concussion affected round three scores; however, as owners before this can testify too, he wasn’t exactly flying.

I have no doubt that over the next few months we’ll see him at his scoring peak again (we saw moments of it last weekend). However, to be ranked where he is on average after four weeks, nobody would’ve predicted.

Two-time premiership captain and Brownlow medalist, Trent Cotchin is one of the most inspiring leaders in the AFL. His emergence as a leader has come at the cost of his fantasy footy output. In the past few seasons, he’s averaged 80 and 70 in AFLFantasy while it’s a 79 & 89 in SuperCoach. In addition to his scoring slope, he has some very dominate fantasy footballers in his team. Dustin Martin and Bachar Houli are both dominant scorers in the forward and backlines and probably could have lead the Tigers scoring had both players not missed one game this year. He currently leads Dion Prestia by 18 points in SuperCoach and 4 in AFLFantasy. It’s a small lead, but certainly not one I would’ve predicted.