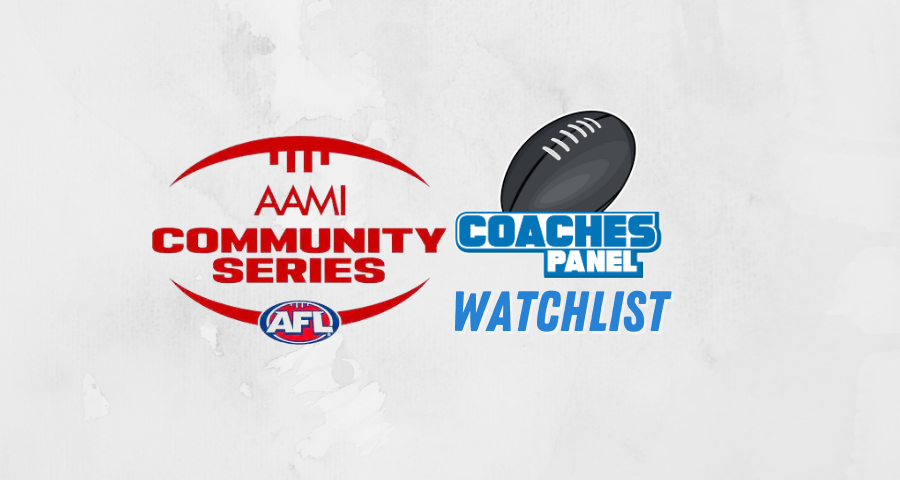 Footy is back! Tonight the AAMI Community Series gets underway. It’s our final chance to see players in a semi-competitive hitout before the round one lockout in a fortnight. So we asked members of the panel to list some players that are on their watchlist.

Ready to take the next step going into his 5th year. I will be watching closely how often kangaroos use him. Obviously, he’ll attend every centre bounce.

It’s no secret that he is a gun midfielder in the making, but he may not reach his full potential in a stacked giants midfield brigade. I’ll be watching for how he fits in that midfield rotation.

We know what he’s been able to score playing a midfield role. He moved down last year back, but a projected move back to the midfield could see him underpriced to begin the year.

What’s his role, and just as importantly, what’s his endurance like now, and can he run out four quarters in the mids?

Will slide in just about every draft but by all accounts is playing forward this year. Keen to see if that role change is apparent and how well he moves across the ground given recent struggles.

The cupboard is looking awfully sparse atm. Can any of these kids put their hand up for round one?

How does he look this week with a game under his belt.

Role and performance in a more meaningful matchup.

Does he play a full game and split duties with Grundy as he did in the finals last year? Or will Grundy go back to being a sole ruck like normal to start 2021?

What is his role? Is he best 22? Is he the Paton replacement?

Watch the rookies. Do they look like they have a role? Is that role q replacement for someone missing?

How quickly will he pass the former tiger as Fox’s boy?

Saints made a bid play for the effervescent Higgins, will we see the spark ignite into a flame, the kids been a Saints supporter since he was in nappies and think this could be a match made in heaven.

Over the past 2 years he’s been touted as a mixture of Dangerfield, Fyfe and Veszpremi, we’re finally going to see what he brings to the table, unfortunately was nursed last week under concussion protocol And Will Martyn do enough to get the Houli spot in Round 1.

Not even sure he’s the best Dow playing AFL footy atm. Wanting to see how he goes with an opponent or in a contested situation, not sold on the hype train but willing to watch another game