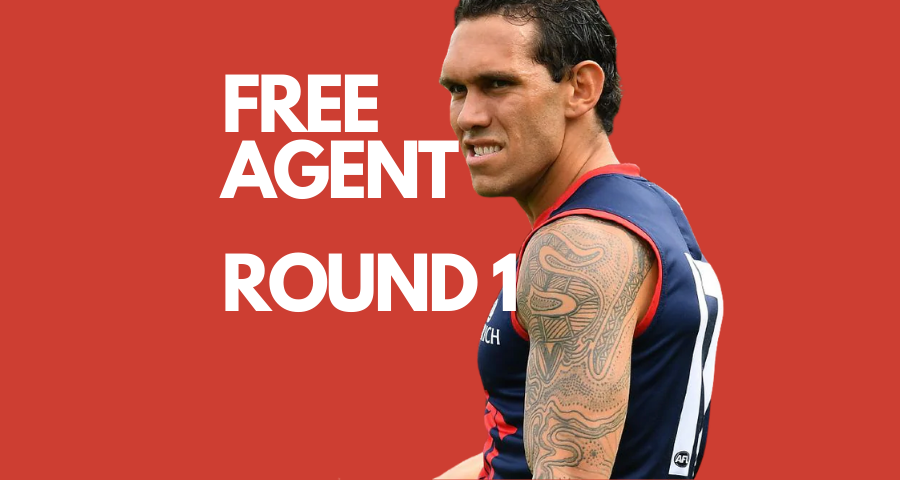 By the time the ball has bounced on Thursday night and our glorious game has returned to us, it will have been 81 long days since the conclusion of round 1. This is clearly the longest in season break we have ever seen and it is unknown what affect it will have on the performances of the players.

What is clear, is that there is a raft of players who will benefit from the break to recover from long term injuries. I have been pondering which players will have benefited the most and how that affects those who are playing in Draft leagues across the formats.

Below is a list of players who would have had almost no chance of suiting up for round 2 had we not had the break and therefore are potential nuggets if they are available in your league as Free Agents:

Please note for the purposes of the article, I have used scoring stats from RDT and AF but the info is still relevant for SC

Mundy’s relevance in fantasy circles has diminished in recent years due to his age and the loss of DPP eligibility but he is a warrior and hasn’t averaged less than 80 in a season since 2009. The former captain broke his leg in December in a freak accident and wasn’t expected to be back until early in the season. He missed round 1 but is now ready to go and would be a very handy back up for your midfield.

Acres is another Docker who has benefitted from the long break as he has now recovered from his 8 week hamstring tendon injury. Initially set to be out until round 5 at least, the former Saint was one of the standouts on the track during his first pre-season at Fremantle before sustaining the injury at training in early March. Acres is expected to roam the wings for the Dockers this year and would be a terrific addition to your squad.

After tearing his ACL in round 4 last season, Ward was not expected to return until at least round 3 and would have been overlooked in many Drafts. The Giants’ games record holder is now raring to go and after averaging in the mid to late 90’s for the better part of a decade, he is a no brainer off the scrap heap!

In what would be one of the feel-good stories of the season, Bennell is very close to finally playing AFL again. Picked up by Melbourne in what is likely to be his last chance at the highest level, Bennell suffered more setbacks with his troublesome calves and wasn’t expected to be available until mid-season at best. He’s now ready to play and coach Simon Goodwin is tossing up whether to debut the former number 2 draft pick this weekend against the Blues. Just as a reminder, the last time Bennell played more than 2 games in a season, he averaged 92!

There was a lot of uncertainty facing Heppell’s availability in pre-season as he recovered from foot surgery. Initially expected to be right for round 1, the Essendon captain missed and didn’t look like returning for up to a month. Here we are nearly 3 months later, and it will still be touch and go whether he gets named for round 2. He averaged 94 last season but averaged 100+ in the 4 seasons he played before that. Would be a great get for your midfield

Libba was expected to put his hand up for selection in the first few weeks of the season as he recovered from post-season knee surgery. The 27 year old has now had nearly 3 months of extra rest for his troublesome knees and should add some much needed grunt to a Bulldogs midfield that was towelled up in round 1. He averaged over 100 in the opening month last season and you could do a lot worse than grab him for a stint in your midfield.

Big Stef’s season was in real trouble after suffering a tear to his PCL in the round 1 loss to the Hawks. He was set to miss half the season and was in a brace for 6 weeks but incredibly, the 33 year old veteran is now likely to play in round 2! If he was dumped in your league after round 1, he may still be available for you as a free back up ruck. Although, unless you have one of the big dogs (Grundy, Gawn, Witts etc), he should be your new number 1

Taranto had a shoulder reconstruction earlier this year after a bad dislocation in the Marsh series and looked set to miss most of the season. It’s highly unlikely he’d be a free agent even with that prognosis, but it is still worth a look because he is now listed as being just 4-6 weeks away!  If you could get the young gun, it’d be the steal of the century!

Birchall was a late withdrawal with hamstring soreness in round 1 and considering his age and recent injury woes, would have been no guarantee for round 2. He now looks set to play this weekend and if he can remain healthy, will be good for some decent scores. In his last full season, he averaged 81 which would make him a handy pick up for your back line.