Fantasy Football Winners and Losers from the 2020 Trade Period 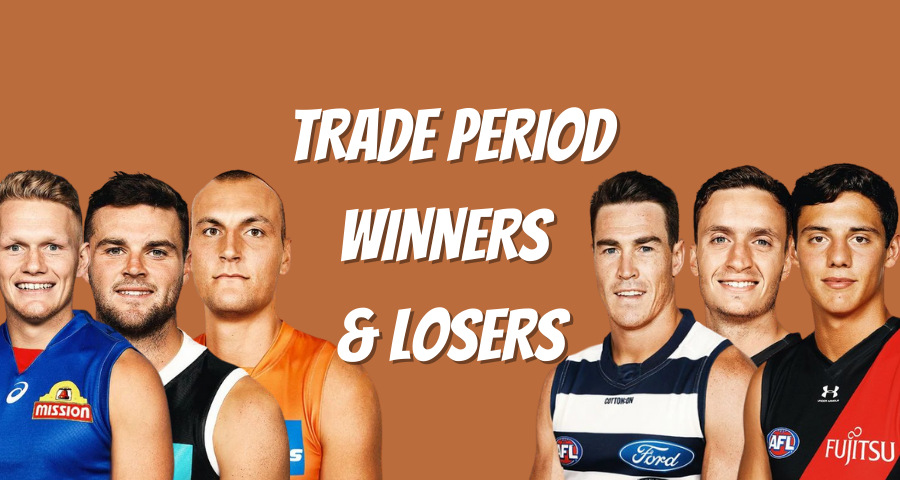 It doesn’t take a doctorate to recognise the importance of Braydon Preuss not only to the GWS Giants structure but his fantasy football. Over the past few seasons, Preuss has found himself behind both Max Gawn and Todd Goldstein as the lead ruck candidate. While I’m sure the minimal opportunities have frustrated him, an apprenticeship under these two premier rucks will only serve him well.

Despite only playing under 20 games, he’s shown some fantasy pedigree including a personal best 108 in AFLFantasy and 140 against Carlton back in 2019. Added to this, he should hold RUC/FWD status making him the perfect starting squad candidate either at R2 or as a forward where he can later turn into an insurance policy in the rucks if required.

Will Zac Williams truly be given the midfield time? If he gets this at Carlton, regardless of his injury history Zac’s gonna push deep into being one of the most selected players in 2021. For over half a season in 2019, Zac was allowed midfield opportunities at the Giants and his fantasy footy numbers are very strong.

In the final 11 games of the year, he posted an average of 103 in AFLFantasy/DreamTeam and scored seven tons including three over 120. While for SuperCoach he averaged 107 and posted 8 tons including a season-high 143 against the Kangaroos. In terms of scoring differential for pre and post-injury that’s +19 in AFLFantasy/DreamTeam and +13 in SuperCoach.

Josh Daicos went past Tom Phillips in the eyes of the Collingwood coaching staff. As a result, the wingman was forced to morph his game to play across the half-forward flank. The departure of Isaac Smith means that ‘Flippa’ slides straight into the wing role at the Hawks

Twelve months ago I would never have said it, but heading into a new season, Tom looms as highly relevant fantasy player. This is for two reasons. Firstly, due to him being played out of position, he averaged considerably less than previous years and offers value for money. Additionally, due to him being played out of position, he’s a certainty to pick up forward eligibility. In 2018 he averaged 95 in AFLFantasy and 90 in SuperCoach, a return to these numbers would catapult him well and truly into the top 10 forwards.

Geelong landed arguably the biggest name in the trade period with the recruitment of Jeremy Cameron. Should his addition to the Cats see him bounce back to his best he has 20+ points per game based on his previous season’s averages. Certainly, he’s a stepping stone to consider. However, Cameron isn’t the biggest fantasy winner.

Rather it’s what his recruitment means for Patrick Dangerfield. As 2020 went on Danger spent increasingly more time forward as the Cats moved away from a two tall forward structure to be a Hawkins/Danger pairing. The inclusion of Jeremy should enable the Cats to play Dangerfield much more through the midfield and only have to rest him forward.

I’m of the opinion that Patrick should also gain MID/FWD DPP in 2021, making him one of the likely most selected fantasy football players

In a similar vein, the departure of Adam Treloar only further opens up the scoring potential for Taylor Adams. This year they played eight games together, in it he (Adams) averaged 89 in AFLFantasy and 102.4 in SuperCoach.

Finally, I’m a big fan of what Port Adelaide have done especially at the drafts over the past few seasons. The clubs famous 2018 draft brought int both Connor Rozee & Zac Butters who are incredibly exciting and damaging players. The challenge for the Power since their arrival has been about how much they balance them in their time through the midfield and always up forward.

For this reason, it’s why I like the recruitment of Orazio Fantasia. If he can get his body right then Fantasia provides a dynamic and electricity that few in the league can replicate. Orazio along with an aging Robbie Gray should be able to take the baulk of the forward craft, allowing Zac and Connor to boost the midfield minutes.

Should this take place I suspect we’ll see them move from 60%-70% time forward to potential a 50/50 split giving them a chance to boost the fantasy scoring substantially. Something both Rozee and Butters have displayed an ability to do on numerous occasions

Is it too big of a call to say the entire Western Bulldogs midfield? The retention of Josh Dunkley and the inclusion of Adam Treloar makes me very nervous about selecting any Bulldogs midfielder. Their Coach in Luke Beveridge has shown historically a tendency to move players positionally at a whim.

I love the breakout potential of Bailey Smith, the consistency of Jack Macrae and the hot form that Marcus Bontempelli has shown right now I’m very uneasy about selecting any Bulldogs midfielder.

The inclusions of Brad Crouch and Jack Higgins will do wonders for St Kilda’s midfield depth and forward craft. But if you planned on buying up on either of Jade Gresham getting more midfield time or Seb Ross pushing back into the guts then be prepared for the bad news. Both are destined now to be it, players, in that midfield unit unless injuries hit the Saints hard.

Darcy Parish owners in keeper leagues would have been nervous this whole trade window. The inclusions of Josh Dunkley and Jye Caldwell could’ve placed a certain end on his midfield time.

However, with only one of them getting through the door, it isn’t as bad as it could be. Nevertheless, the combination of a new coach and a central new player into that midfield has me worried that the former top 10 pick will never become the fantasy star many had hoped for.

2020 will not be the year for coaches to jump on a prospective breakout for Tim English. The addition of Stefan Martin while it will be great for the Bulldogs premiership aspirations it will diminish both players scoring potential.

For our Patreon supporters, you’ll be able to access our exclusive in-depth player by player reviews of the trade period. In it, we look comprehensively at the implications of every player movement for both their old and new clubs. You can join our Patreon army here.