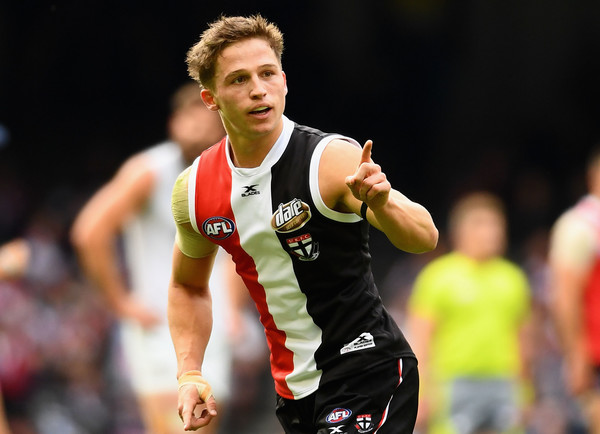 Take everything with a grain of salt in the preseason. Take it with two when you’re playing in 39 degrees.

Sweeper up across half back and pushed through the wing. North were dominating possession and it may be worthwhile watching whether they’re planning to play this way in season or if it was simply to counter the heat. Jamie was effective with ball in hand but this does scream fools gold.

First game at this level where he looked a serious player. Super classy in traffic and on the outside. Looks like he’s found his feet and will damage in 2019.

Drove play from the wing in many ways. Was a standout for the Roos and demonstrated his capacity to involve himself with repeat running.

The big news story early in the day was the injury to the non-strapped left knee. Fortunately Hall returned to action in Q2 before being mothballed. Watch this space.

When St Kilda have one proper ruck on their list and he gets injured, you’re unlikely to be competing with much. Todd had a field day. Expect it to be a touch tougher against an actual ruck.

Started the game on fire with an intercept mark in the first play. He’s the clear leader of the backline and relishes the ability to fly for the pill. These rule changes suit blokes like that.

Split his time between mid and forward. The big gain from his play was the fact that he ran the match out strongly. In tough conditions, this may be indicative of an improved running capacity.

Enjoyed time in the middle and didn’t look out of place. The type that remains consistent in traffic and puts his body in the tough spaces. Looks much improved from his debut season body wise.

Split his time through the middle and up forward. Super classy as usual, but can he improve his quantity. May never get to the rate the fantasy world desires.

Was a prominent forward for the victors and has the ability to effect aerially and at ground level. Scored okay but will have stronger outputs when he puts it all together.

Strong settled type in defence. He looks to be more focussed on the defensive side of his game and I didn’t notice much run and carry from him. He’ll be better for the run.