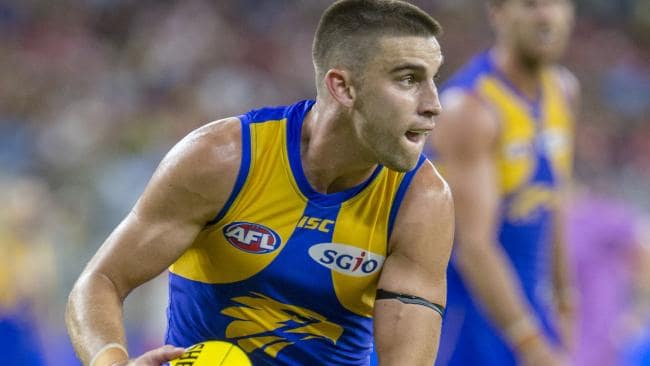 The JLT Western Derby: Rushton Park in perfect conditions. There was plenty of pressure on display early with a scrappy hard-fought encounter and plenty of contested ball. The Eagles started to assert their ascendency in the second quarter and blew Freo away with a polished display in the last half, albeit by just the 51 points. The Fyfe-less Dockers lacked leadership and appeared a ship without a rudder at times. Major and significant fantasy outs were Fyfe, Blakely, Sandilands and S Hill for Freo and JJK, NN and Cripps. Francis Watson also missed and was played in the 2’s

Dom Sheed: the dominant alpha mid out there who racked them up at will and ends the JLT Alphabet Cup with a lazy 79 disposals,15 clearances, 17 inside 50’s, 21 score involvements, 12 marks, 5 goal assists and 2 goals, all from just the 2 games. Throw that on the back of his 2018 finals form and we have a seriously cheap pod to consider.

Shannon Hurn: the General patrolled the defensive half and marked everything that came his way, took kickouts and is more than a solid fantasy option.

Jack Darling: on the rise and shows plenty in the way he presents and hits up, unfortunately, has been lacking some finishing skills which would certainly make him a decent salary cap forward option, still a very decent option in draft leagues

Jack Petruccelle: started with a creative dribble goal and showed plenty of speed and creativity, became very lively as the Eagles got on top, worthy of a rook bench spot lock

Willie Rioli: the slippery dominant forward who got thrown into the midfield for a couple of stints in the 3rd quarter, knocked out a 147 SC and 120 DT on the night and is priced at just 59 and 53

Andrew Brayshaw: 22 disposals, 6 tackles and 5 clearances, following in the footsteps of his brother Angus, is 2 Brayshaws too many to start within AFL fantasy in 2019?

David Mundy: Fantasy forward option, didn’t do his chances any damage tonight with a solid fantasy game, but does Fyfe back take a slice of his pie?

Luke Ryan: Underwhelming tonight, and didn’t play a major role in the kick-ins.

Jesse Hogan: presented well, copped an early blow to the ear before half time, looked one of the better Dockers on the night

Sean Darcy: was opposed to Hickey and started well but went downhill just as quick as Freo did, don’t even think about risking your R2 on him, not this year anyway

Adam Cerra: played forward for 3 quarters and was “fantasy crap” in that position, fortunately wiser heads prevailed at 3 quarter time and we finally got to see a taste of how good this kid is in the midfield

Brett Bewey: played half a game in the 2’s earlier before getting a late call up which probably doesn’t go well for him getting a Round 1 gig, played the last half and got involved with 8 disposals