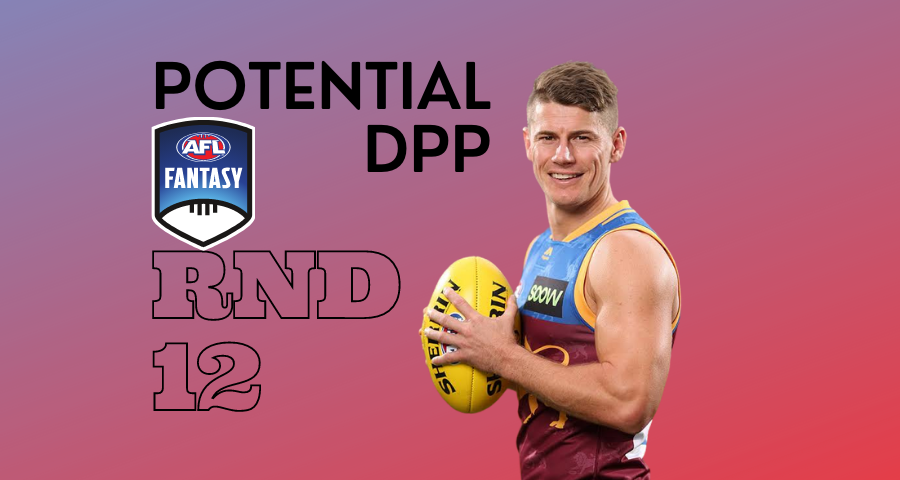 After round 12 the next and final DPP’s will be announced for AFLFantasy. Here is a look at just some of the players that are in contention to pick up an additional position.

The dockers are struggling with talls down back with injuries to the key defensive stocks of Joel Hamling and Alex Pearce. Brennan Cox has been sent down back to try and battle opposition key forwards. His scoring isn’t relevant for even the draft format, let alone classic. But it’s a role change that needs to be awarded. Similarly, Bulldog Ryan Gardner has had a role change. When playing for the doggies, he’s now playing exclusively as a defender.

Sam Mayes, The former Lion, has forced his way into the power side and in the past three weeks has looked at home across half-back and up across the wings. An average of 66 including a season-high score of 92 puts him right in the mix to sneak on the field in most teams backlines. A handy DPP pick up if this is awarded.

Over the past month, the Crows midfield has had a significant change due to several factors including injuries to Brad Crouch and Rory Sloane. As a result, the coaching staff have moved Rory Laird into the midfield. His most recent clash against the Pies has certainly highlighted just how good of a midfielder he can be. Lock this DPP in!

Premiership Tiger has been increasing his midfield time every year. Now Shai Bolton has been forced to increase his time in the guts with injuries to Trent Cotchin, Josh Caddy and Shane Edwards choosing to stay home from the hubs. His value in draft leagues has certainly increased because of it. Not someone to target in fantasy classic.

The move to Fremantle has seen the former Magpie James Aish become a crucial part of replacing Ed Langdon and Brad Hill. Playing predominantly as a winger Aish is having a personal best season in terms of his relevance for draft coaches Currently as a back eligible player he’s ranked inside the top 20 for total points scored. As with every player that every gains centre status, it only ever adds flexibility to your squad and not adding to points on the field for owners.

Like teammate James Aish, 20-year-old Adam Cerra has taken his opportunities with departures in a few former teammates and started to make the midfield role his own. As a player, he’s a great user of the ball on both sides of his body, strong over the footy and clean at ground level. After being selected at pick five in the 2017 draft, Docker fans (and draft league owners) are starting to get some glimpses of the player he’ll become. Does being awarded DPP make much of a difference to owners? Probably not, but it validates the role change he’s had in 2020.

Last year the fantasy football community was hoping that the VFL midfielder star would get his chances in an undermanned Carlton midfield. It didn’t eventuate in 2019, but in 2020 Michael Gibbons has forced his way into the Carlton midfield and playing a significant support role to Patrick Cripps. Like his teammate, Matt Kennedy is getting plenty of time through the Carlton midfield. He’s been a handy pick up off the waiver wire for astute coaches.

With Nic Naitanui taking the lead ruck role the Eagles have often used another tall as the relief ruck. West Coast turned to Oscar Allen to help bring some support. This year he’s averaging career-high hitouts a game and providing viable support to NicNat.

It’s always dangerous to make big bold predictions, especially with premiums. However, with Dayne Zorko, I’m happy to go there. Lock in the Lions skipper as a DPP MID/FWD at the end of the round. A few small niggling injuries might have been the thing that cost the Brisbane captain from picking up a position this previously. Regardless, Dayne Zorko has had a drastic role change in 2020, spending plenty of time-based inside forward 50.

The Lions midfield is heavily centred around Lachie Neale, Jarryd Lyons and then a floating cast of thousands which includes Zorko, McCluggage, Berry and Rayner amongst others. If you track his most recent form run, he’s arguably a worthwhile pick in fantasy classic as a midfielder. The addition of this forward status will make him one of the most highly sort after prospects this week.

Current owners of Patrick Dangerfield and Nat Fyfe will be holding their breath in the hopes that either would be awarded a new DPP. Nobody would deny they have spent significant forward minutes over the past few games, but if we are to count the season as a whole not just recent weeks, then we might just be missing out on them both. It could come down to the roles they play this weekend. If I was to make a prediction, then I think both miss, but it won’t be by much. As a Danger owner, I hope he gets it.

Popular cash cow Sam Simpson has also been squeezed out of the midfield unit at Geelong and is now spending a lot of time off half-forward. Should he gain FWD status, he could become a handy option for another week or so before he hits his cash generation peak.

One last Cat, I promise. But Geelong has moved the magnets around a ton this year, and rebounding defender Zac Tuohy has spent plenty of time in the last month as a forward. The core reason behind the move is Geelong recognising the need to get quality inside 50 entires. Anyone that’s spent time watching Tuohy can vouch for his quality delivery of the football by foot. He’s probably only draft relevant now given I don’t see him matching it with the top tier backs. However, if you’re one of the few that have him in classic, you’d be happy with this potential new squad versatility.

The Fremantle big man Rory Lobb has spent the majority of the season playing a split role with Sean Darcy. What might not bode well is early in the season Rory Lobb was forced to ruck solo when Darcy went down injured. However, over the past month, it’s been much closer to a 50\50 split especially without Jesse Hogan playing up forward. Whether this split of time is enough in AFLFantasy’s eyes is enough will ultimately determine if he’s awarded DPP. A draft relevant only addition.

Demon Luke Jackson should pick up forward status, but isn’t a relevant fantasy prospect just yet.

Lastly, James Sicily has spent a few quarters down inside the Hawks forward line. However, it’s just nowhere near enough time to warrant the addition of a new status.