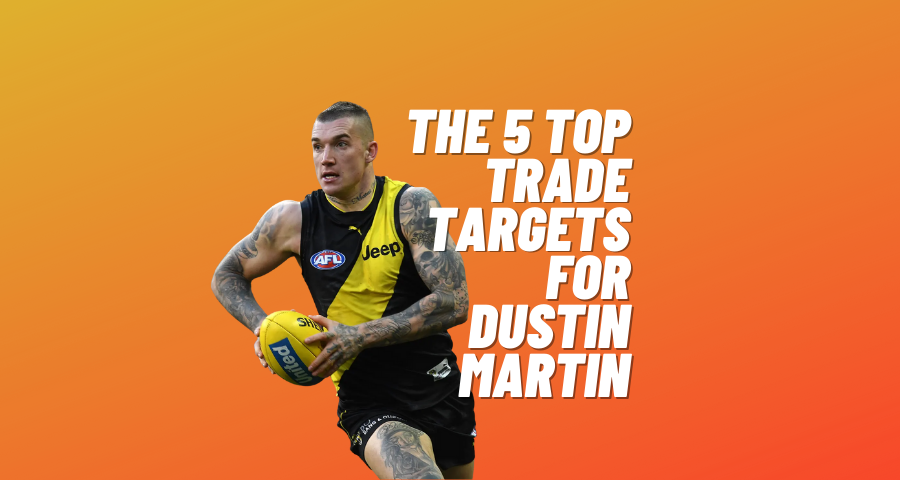 It was a horrible sight last round! The triple Norm Smith Medal Winner writhing in pain on the ground at Metricon stadium. Later, the club confirmed that he would miss the remainder of the season after suffering a kidney injury. Before this injury, Dusty was one of the most popular forwards in fantasy football. This season ending injury means he’s a must trade!

Each side is different and will have different trade priorities; I’ve decided to focus this article on like for like forward line only replacements. So here are my 5 Top Trade Targets For Dustin Martin.

At his best, Dusty is the games most dynamic game breaker. While ‘replacing’ him as a player is impossible, Shai Bolton does possess some similar game breaking dynamics. Bolton, currently not ‘banging the door down with his scoring, but he’s been far from poor.

Between rounds 4 – 13 in AFLFantasy and DreamTeam averaged 98.7, including 4 tons, while in SuperCoach, he averaged 108 and had a scoring range between 96 -121 during this 8 game stretch. If Richmond is any chance of putting themselves deep into finals, I personally believe it’ll come off the back of a dynamic month of footy from Bolton. With no Dusty, he becomes the match-winner for Richmond. In my eyes, he’s the standout replacement if you own Martin.

JDG5 is one of the form forwards across the competition. In AFLFantasy/DreamTeam, he’s averaging 109 in his last 5 and a monstrous 120 in the past three. In the last few rounds, he’s among the top 10 of total points performers and given Dusty’s quieter scoring patch, moving to the ‘hot hand’ forward could be a nice late season boost for your side.

In SuperCoach, it costs you about $50k to trade into him, and surprisingly his ownership is still at 10%. This is ridiculously low, considering his lowest score in the past four games is 114.

You shouldn’t be surprised to see Matt Kennedy here. Ever since Carlton played him in his preferred role as a midfielder from round 14 he’s been sensational for his owners. A five game average of 93 in SuperCoach and 97 in AFLFantasy/DreamTeam is a supreme return. Equally encouraging is that he’s shown moments of a ceiling with a season high score of 116.

His ownership numbers aren’t low and neither is his pricetag. But for those without Patrick Dangerfield he’s probably one of a handful of matchups you feel nervous being against. Already this year Danger has shown the ‘monster’ ceiling game is still within reach.

The injury to Jeremy Cameron did result (as expected) with Danger increasing his forward 50 minutes. However, if the Cats dominate opponents over the coming five weeks like they did last week then it won’t matter. What he might lack in disposals, he’ll likely make up with goals scored. This week they take on the injury riddled Tigers, the following week it’s the bottom of the table Kangaroos. Winning these games might all but stitch up a Cats top 4 spot, so I can’t see them taking the foot off the pedal.

Recency bias after a monster game last weekend? Perhaps! But if you’ve watched North over the course of the season, to see the scoring ‘pop’ from Tarryn Thomas is of no surprise. Last weekends 126 in AFLFantasy/DreamTeam and 108 in SuperCoach is off the back and 88 (SC) and 84 (AF). The week before that, he scored an 86 in (AF) and 96 (SC). Yes, the scoring isn’t ‘insane’ but if you need a unique then ‘TT’ isn’t the worst idea out there.

Ultimately, many of these guys above are the ‘value options.’ But, of course, the likes of Aaron Hall, Dayne Zorko or Jack Ziebell can be considered too if the salary isn’t a restriction for you.

In AFLFantasy, we do have a few additional options, Josh Kelly would’ve been the obvious top tier option, but given he’s got some question marks around availability, you can’t go near him. So possibly Scott Pendlebury is the next best available for you, or if you’re looking for a smokey, then Harry Schoenberg is coming off the back of a 113 & 83 and is priced at $481,000.