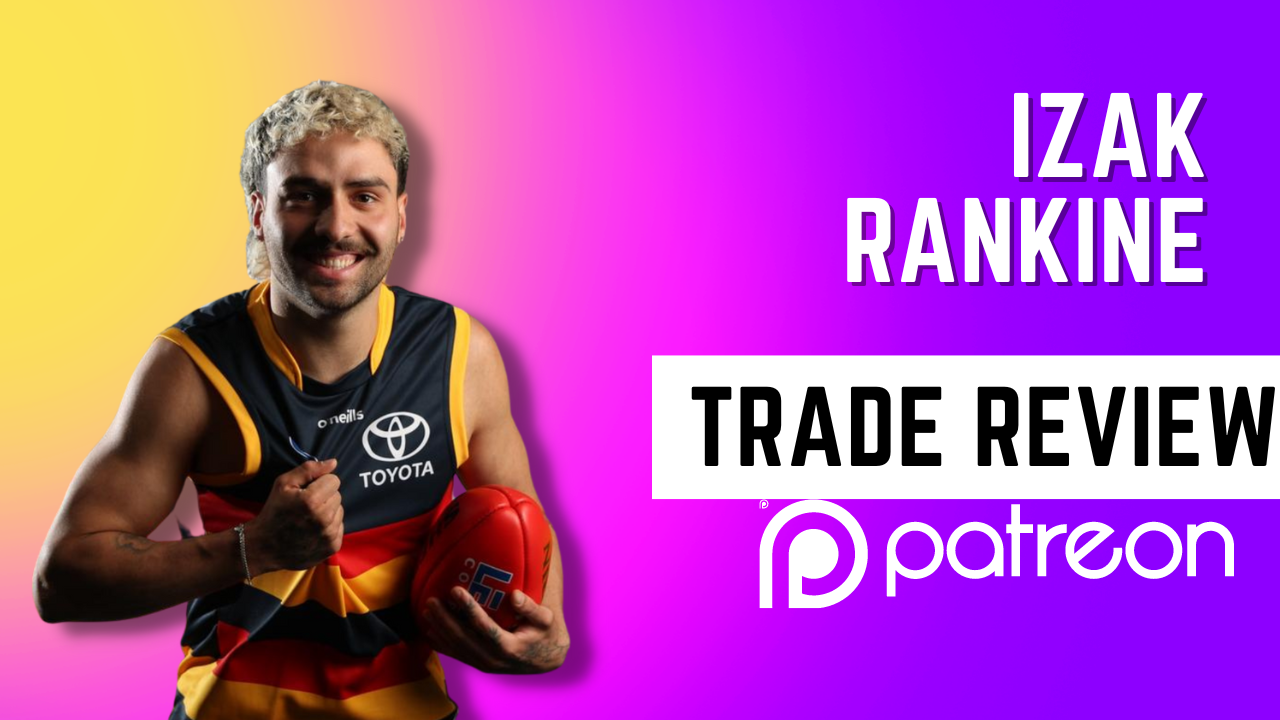 The Crows have traded away a first-round selection for two consecutive seasons. Last year it was Melbourne’s future 1st for Jordan Dawson; this year, it’s pick five for Izak Rankine. The addition of Rankine to the Crows has been downplayed in some portions of the media. But don’t be mistaken; his addition to the Crows is substantial.

As a junior, Izak was rated as one of the most high-impact players ever. He can create space in high traffic situations, impact the scoreboard and use the ball efficiently. Draft guru Cal Twomey described him as the ‘most dominant player in the Under 18 Championships’. That same championship included Sam Walsh, Connor Rozee and Bailey Smith.

At Adelaide, Rankine now joins a forward like that for the next ten years and looks like a handful for opposition defenders. Darcy Fogarty and Riley Thilthope have shown more than just glimpses; they’ll be excellent key forward targets. At the same time, Josh Rachelle didn’t even need one full AFL game to make the league notice that he’s a star.

It’s only been in the final few months of the 2022 season that at the Suns, the “glimpses” of brilliance from Rankine had become normative and consistent for weeks. He became one of the league’s most dynamic and damaging small forwards.

However, it’s not just the forward line that both Rankine and the Crows believe he’ll stay. Izak’s spoken plenty of his desire to move into the midfield. For the Crows, that’s exactly what they need too. They desperately lack some polish and X-Factor in the midfield, and with Rankine rolling through, that issue is immediately addressed.

I expect to see over the coming years an increasing trend of more centre bounce midfield minutes as he builds up his fitness at the Crows.

Impact on the old club

The departure of Izak Rankine will hurt. Despite the club tossing pick seven and Jack Bowes out during the trade period, losing Rankine wasn’t something the club wanted. Not many players in the league possess the raw talent that Izak possesses.

While the Suns might not be able to replace him with another identical piece, they certainly can recreate and recalibrate options within the Suns forward structure. Long-term Ben Ainsworth, Sam Flanders and Elijah Hollands will provide a damaging medium-small trio inside the forward 50. They support the strong marking work of Ben King and the versatility of Mabior Chol. The departure of Rankine immediately opens up opportunities for Darcy Macpherson, Malcolm Rosas and even Alex Sexton to become regular features. The preseason performances of this trio will largely determine who gets the ‘first crack’ at the job.

I found placing the fantasy relevance of Izak Rankine a fascinating challenge. I’llI’ll explain why. On the surface, his scoring averages don’t exactly excite you. The high 50s in AFLFantasy/DreamTeam and mid-60s in SuperCoach aren’t something you should consider. However, there are some significant upside trends that even at a new club might be someone to at least monitor for the offseason.

Over an eight-game stretch between rounds 8-16 last year, he posted three SuperCoach tons, the lowest score of 88 and an average of 96.5. While in AFLFantasy, during that same stretch of games, he averaged 72. It’s evident that his skill set and ability to impact a game and it’s outcome is that Rankine is a supreme SuperCoach performer in contrast to other formats.

Alongside this, his average score in victories was up 14.2 points per game in AFLFantasy/DreamTeam and 17.8 points in SuperCoach. These elements combine to bring me to a conclusion to believe that there’s some significant upside to Rankine. Especially in SuperCoach. Arguably, there’s a proven upside of up to 30 points based on that mid-season stretch of scores.

The unknown element in forecasting his fantasy football prospects in 2023 is all centred around his positional role at the Crows. Just how many midfield minutes will he see in 2023? Will it be a small split? Or closer to a 50/50?

In AFLFantasy/DreamTeam, unless something significant becomes evident in the pre-season around his midfield role, I don’t feel confident that the minimum of 20 points per game of upside is required to select him. However, I’d not be opposed to a late round selection in drafting versions of these scoring formats.

For SuperCoach players, his relevance in all game versions correlates directly to the players available in our forwards. We’ll lose plenty of the top-end options from last year, and if they aren’t replenished, then his relevance of him, especially in drafts, could significantly jump.