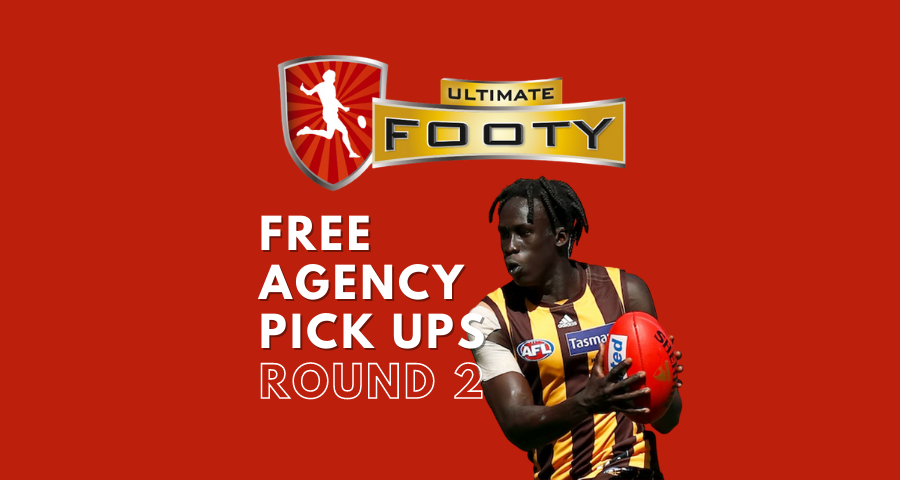 Jiath showed signs in pre-season that he could become fantasy relevant scoring an impressive 83 in the AAMI Series win over North Melbourne. After an impressive 25 touch, 8 mark display on the weekend, he now appears to have locked in a spot in the Hawks’ back 6.

He plays a great fantasy game providing run off half back but he also reads the play very well averaging 3 intercept marks a game so far. He looked very confident against a top side in Richmond, taking the game on and even giving Dustin Martin the old Dusty fend off!

Also available as a midfielder, Howe is another Hawk that found plenty of it on the weekend and will see his ownership rise. Running up and down the wings, he took 11 marks and showed signs of becoming more than just a bit part player. Wingard’s imminent return could hurt his scoring potential but for now, his DPP status makes him very appealing.

Humble numbers so far with scores of 80 and 66 but what interests me most about Drew is his role. Almost the forgotten man of that brilliant 2018 draft haul that Port snagged, Drew missed all of 2020 and looks hell bent on making up for lost time, laying 11 tackles in round 1! He leads the way for centre bounces at Port attending 45 of 61 (74%) with Lycett the next best with 41.

He needs to get his hands on the pill a bit more, but this kid is keeping Tom Rockcliff out of the side. That says something.

Chris Scott’s reluctance to give Constable a long stint in the side has been a source of frustration for the fantasy world ever since the young Cat debuted in 2019 and averaged 88 in his first 4 games. Constable has gotten a small look in so far this year due to the injuries and suspensions at Geelong.

His average looks terrible due to scoring 25 as the medical sub in round 1 but worth noting he scored that 25 in just 13% game time and then followed it up with a 73 off just 55% game time against Brisbane. If he gets close to a full game this weekend, he should score very well.

Nothing to see here, try again next week!

Playing in a new role across half back, Atkins turned heads in the AAMI Series with an impressive 28 disposal effort against Essendon, well above his career best of 23 disposals in a game in 2019. Those that were optimistic may have been turned off by his paltry score of 51 in round 1 in the loss to the Crows but that was a strange game and many Cats were well below their best.

He backed it up with a solid 88 against Brisbane and what excites me most about his scoring potential is how hard he is at the man having averaged 5 tackles a game so far this year and 4 a game across his young career. The flipside of that is that he has given away 9 free kicks (-27 points) in 2 games and been awarded none!

Largely unknown before this season due to only averaging 31 in his debut season last year, Frederick became a more familiar name after scoring a ton in the AAMI Series thanks to 9 marks and 2 goals. Unfortunately, he then strained a calf causing him to miss round 1 and potentially losing his place in the 22.

But his solid pre-season was rewarded as he came back in round 2 and looked great playing high half forward and scoring 76 from just 13 touches. Walter is likely to return this week and could impact Frederick’s scoring, but I think the kid is exciting and will thrive with more experience around him.