What the AFL fixture means for SuperCoach and AFL Fantasy players 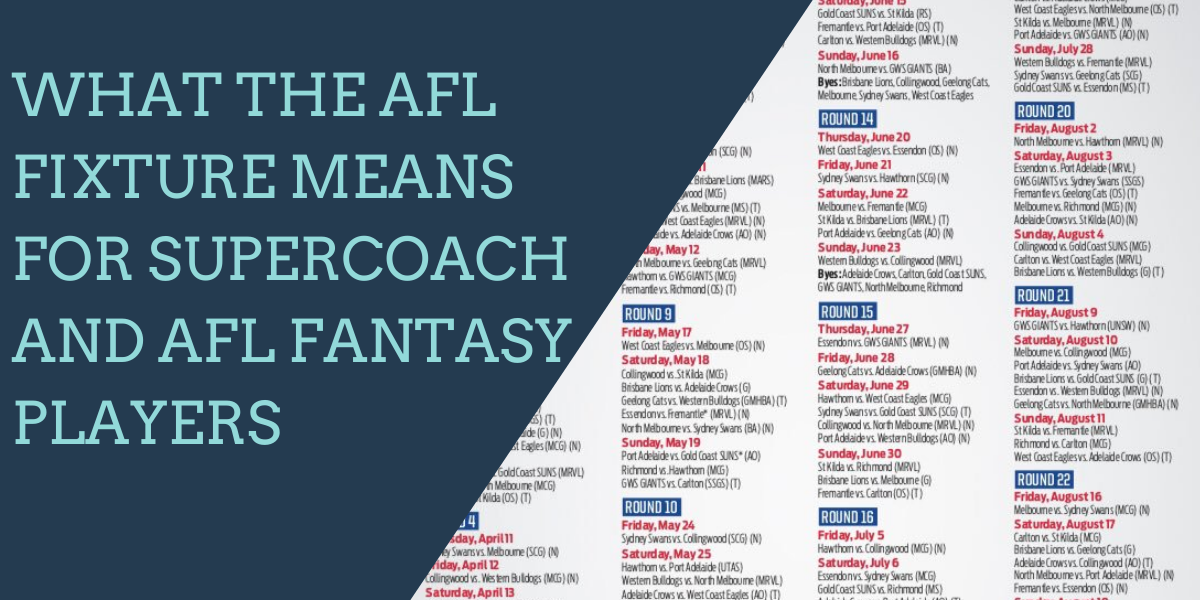 The 2020 AFL Fixture has been released and for coaches who play AFL Fantasy, SuperCoach or DreamTeam it’s another step closer to the preseason getting into full swing. For a breakdown by round or club of the fixture, you can find it here.

For the fantasy coach, the fixture is crucial in a variety of areas. It can determine which premiums you start with and which you don’t. It can decide which lines you load op on premiums and can even help with the selection of rookies. The fixture will play a role in shaping the upgrade plans across the season and even in which priority order.

Whether your an experienced or relatively new fantasy football coach the fixture is a huge factor in what you do in 2020.

Round 12 often provides us with the premiums we target as upgrade targets during the multi bye rounds. It seems like we’ll have plenty of midfield options to choose from with Andrew Gaff, Elliot Yeo, Mitch Duncan, Lachie Neale, Zach Merrett and Seb Ross among the premiums among the possible candidates.

Round 13 provides us with some possible issues to navigate in both our defensive lines and midfield. Down back Bachar Houli, Jake Lloyd, Jack Crisp and Sam Docherty lead the charge of big-name defenders on the bye. Possible more unique picks in Christian Salem, Nic Newman and Connor Blakely will also have a rest.

In the midfield, Nat Fyfe, Adam Treloar, Patrick Cripps and Clayton Oliver are the most notable absent premiums. Added to the list would be Steele Sidebottom, Dustin Martin, Dion Prestia, Luke Parker and Josh Kennedy.

If you are going to go against the grain and not start both Brodie Grundy and Max Gawn, you will have one less issue to deal with in round 13 with both premiums missing that week. For those considering value options like Tim English, Sam Jacobs, they do make potential stepping stones given they don’t have a rest until the following week. Both of these options could then make seamless trades to one of the big rucks that you don’t own. Other round 14 ruck candidates include Reilly O’Brien, Todd Goldstein and Jarrod Witts.

Round 14 presents a potential gap in our premium midfield options all on the bye. Josh Kelly, Stephen Coniglio, Tim Taranto, Lachie Whitfield, Jack Macrae, Marcus Bontempelli, Matt Crouch, Brad Crouch and Tom Mitchell are all missing. Thankfully, given the trading plans, coaches should be making, any potential pain should be offset with upgrades made around this.

There is the potential for further adjustments and planning given we do not have full visibility on the complete positions list. Who does or doesn’t gain an additional position will impact our defensive and forward lines. Furthermore, on what our overall starting squad and trading plans will be.

With the current rolling lockout for SuperCoach and DreamTeam, the Thursday night fixture has minimal impact. However, for an AFLFantasy coach, it presents you with the opportunity to have two chances of getting a good captaincy score. Nine teams during the season will have the opportunity to kick off the round.

The opening five rounds of the year commence with Thursday night games. Carlton, Essendon, Collingwood and Richmond all have two games while Brisbane and Adelaide also have one. The Tigers games are in the opening two rounds of the year so players such as Dion Prestia and Dustin Martin could well prove popular starting squad options. They could move quickly to an Essendon midfielder like Zach Merrett where they play in round three and five.

Essendon also has a further two Thursday night clashes in round 13 & 16. However, the big winner post-bye for Thursday night games is Hawthorn. In round 15 they play Brisbane and follow it up with a match against Essendon. The obvious VC candidate for those games is Tom Mitchell.

Collingwood also has two Thursday night matches in rounds 2 and 4. Brodie Grundy, Adam Treloar is among several Pies that coaches will be VC candidates