The festival of football continues, and for fantasy football coaches we’ll have under 24 hours between lockout lifting and the upcoming round commencing. To help coaches through round 12, let’s look at the players that are ripe for the picking and ready to be traded into your side.

The most hyped trade-in premium defender of the week will be Adelaide Crow Rory Laird. A move into the midfield has seen this diligent defender translate his skills into a contested midfield role. While the role adjustment eventuated a few rounds back against the Kangaroos, it’s his 185 in SuperCoach and 139 in AFLFantasy/DreamTeam that has fantasy coaches salivating. He stills presents value, but remember for DT/SC coaches we still need to navigate his bye round. So some purchasing caution might be required.

It’s a high risk/high reward pick, but if Zac Williams can recreate his back half of last year into 2020, then he’s got the capacity to be among the best scoring defenders available. In the final 11 games of the year, he posted an average of 103 in AFLFantasy/DreamTeam and scored seven tons including three over 120. While for SuperCoach he averaged 107 and posted 8 tons including a season-high 143 against the Kangaroos. An average of 62 in AFLFantasy/DreamTeam and 86 in SuperCoach is reasonable enough but his last two scores of 112 & 105 in SC have coaches excited about his potential. The scoring reward is evident. However, the risk is around his durability. Multiple times in 2020, we’ve seen his body let him down. Another injury at this point of the year would severely impact fantasy coaches.

He doesn’t present the value that he did from the start of the year, but the breakout season of Callum Mills is well and truly underway. An average of 100 in SuperCoach is boosted by his 173 in round six against the Tigers. However, outside of this game he still has three additional scores over 110. In AFLFantasy he’s part of the elite club of defenders that have scored a ton in 2020. He’s also ranked 7th for total points, and with a breakeven of 91 he still might have a little bit more cash to drop

Nic Haynes and Jake Lloyd present zero value for money. However, both look to be among the best backs available in 2020. If you got the cash to spend, they are yet to disappoint this year.

You can take your choice with a trio of Giants with Tim Taranto, Stephen Coniglio and Josh Kelly all viable options for coaches. Taranto is the unique option of the trio, and while he can post big scores in SuperCoach, he’s currently more favourable a scorer in AFLFantasy/DreamTeam. Josh Kelly when fit and firing has proven that he’s among the top echelon of scoring candidates regardless of the format you play. The only concern a coach could ever have over him is his durability.

Bye round free Essendon pair Dylan Shiel and Zach Merrett both have the fantasy ceiling to score well and given their potential are relatively low ownership could also be perfect inclusions to wrap up your midfield unit. Of the two I like the consistency of Merrett more, but wouldn’t talk anyone out of Shiel

The Sydney Swans have been decimated to injuries to a lot of their senior leaders. Captain Luke Parker has been a warrior through the middle. In SuperCoach he’s had just two scores under 100 all year, while in AFLFantasy/DreamTeam he’s just outside the top 10 mids based on averages. What makes this potential selection even more exciting is his low ownership numbers. Well worth the investment of funds.

Finally, last week’s targets are all still very relevant for us as options too. Patrick Cripps, Tim Kelly, Elliot Yeo and Andrew Gaff all have a history that they can go on scoring tears that would make them viable buy low options.

Neither of Sydney or GWS has rucks you’d want to target at all. So it’s pretty much Nic Naitanui or a player that is still to have a bye. Here are the players I suggested last week that pretty much remain the same prime targets.

One of the forwards with the most likely scoring potential off the bye has already been ruled out through injury. I’m speaking about Toby Greene. Not many forwards can match his scoring potential. However, the concern over multiple years now has been around his durability. Not a trade for this week, but if you like to play a high risk for high reward game than Toby could be your man.

Ultimately the big target for non-owners this week is Lachie Whitfield. A five-week average of 121 in SuperCoach and 95 in AFLFantasy/DreamTeam has the former #1 draft pick showing off just why he was the most highly desired forward of the year. The perfect time to trade him in was at his basement price was well over a month ago. However, if you don’t have him, he’s still cheaper than his starting price.

It’s probably a SuperCoach only target but Tom Papley has shown his ability to hit triple figures. From his ten games this year he’s scored four tons and three additional scores 79+. At $423k and a breakeven nearing 150 you could afford to wait a week, but if you are wanting a cheaper pick and with history of multiple tons then ‘Pappy’ could be for you.

The value pick is still Jy Simpkin, but as we’ve shared with a few players don’t forget his week off is yet to be announced. Even after a reasonably poor game (in terms of his execution of skills) he still managed a score in the mid-’70s across all formats. His scoring (and price point) does lend itself to more for a SuperCoach pick, but he’s still value in the others.

Speaking of SuperCoach selections, Oscar Allen is having a breakout season in our forward lines. He’s still priced under $600k, but has shown in the past few months he can score well. Since round five Oscar has scored: 117, 110, 69, 152, 70 & 72. In addition, less than 1,000 coaches (1%) have him. Not only are ‘value’ picks crucial at this time of the season but also players that set your team apart from the pack. 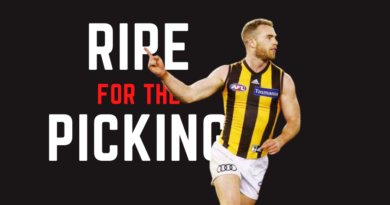