It’s here, we get out first proper look at how sides may structure up, which cash cows may be in round one contention and if any players have a notable role change with the Marsh Series commencing.

Here’s how you can maximise the returns and get the best fantasy footy return from the games you watch in the preseason.

When it comes to the full-blown season what a players fantasy output determines your success as a fantasy coach. However, nothing could be further from the truth in the Marsh series. When watching these games, don’t check the scores and then determine whether a player should stay within your side or not.

Instead, look at the player’s role that they are functioning in the side. Are they getting the desired position that is optimal to in-season scoring? Is this role the primary function in the team, or are they spending a majority of time in another part?

A players role is more important to observe during the match rather than their end of game fantasy score.

For example, Andy Brayshaw has been mooted as a potential breakout candidate in the forward line, however, to have confidence in his selection you’ll be wanting to see him spending a primary role as a midfielder across the Marsh series matches he plays. Without seeing it, he cannot be considered.

It may feel like a contrary point to that’s which is above; however, nothing could be further from the truth. Instead, this is an enhancement point of the above. While we track the role/functions of players in the match, we need to be aware of which clear best 22 players are not taking part in the game.

For example, continuing with using Andy Brayshaw as our illustrator he may come out and play a predominant midfield role. However, it is of little relevance given key midfielders like Nat Fyfe does not play and would walk straight into the midfield of the football club.

If a player is playing a potentially fantasy-friendly role take note, but don’t forget to factor in, which clear best 22 and prominent players regularly in the side are missing (if any at all.)

Not to be confused with the question of ‘who’s missing’ from the sides best 22. Instead, this is about what opportunities are there for a player to break into the side. Which vacancies either because of list turnover, retirements, longer-term injuries or trades that have credit a gap that is required to be filled in teams ideal best 22.

A classic example would be to look at the Dockers who are without Brad Hill and Ed Langdon. Someone is required to take some extra midfield load. Observe which players are taking on more considerable midfield minutes and start to clarify who is in contention for that spot.

If They Don’t Play

If a player is coming back from injury and hasn’t been seen in the Marsh Series or played in any practice matches throughout February, I run a line through them quickly as a starting squad option. Eliminate the unnecessary risk of selecting someone you haven’t seen a play and choose to target them as an upgrade if relevant.

Do Your Own Work

While it’s good to listen to fantasy podcasts, websites, fellow coaches and ‘experts’ for advice and insight, there’s sometimes a moment where their opinion of a player contradicts your current view. If you come across one of these moments, do not throw the ‘baby out with the bathwater’ and disregard the player you’ve been bullish on just because someone else has an opinion different to yours.

Use this moment to double-check your research, challenge your existing confirmation bias (if any) in the process and redetermine for yourself why this player is no longer a ‘starter’ for you.

As long as your reasoning is logical, clear and holds the weight, it doesn’t matter what I or anyone else says, back yourself in. It’s always better to back your pick in and be wrong than to go against it and be proven right.

What lessons and rules do you have when it comes to watching the preseason? 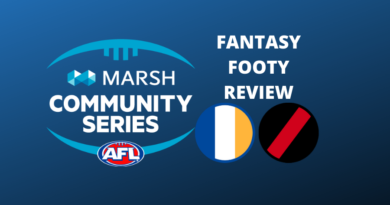