In total 10 players have gained an additional position, two players has gained back status, four gaining centre, one new ruck and three have picked up forward status. Let’s look at who they are and the relevance to your draft sides and leagues.

Will Powell | ADD BACK

Will Powell isn’t a sexy name acquisition to our backlines, but his number highlight that he is someone we need to patrol the player markets for consideration. Over the past five week’s he’s averaging 57 which features scores of 73 and 67. His seasonal average of 47 might put off some coaches, but a look into the numbers shows he’s much more reliable than that. This average includes an injury impacted score of 3. So he’s much closer to the mid-’50s in terms of real deliverables. On the first reflection that’s not amazing, but it’s enough to get him inside the top 75 backs based on averages. It’s not amazing, but you could do worse.

His scoring isn’t relevant for even the draft format, let alone classic. But it’s a role change that needs to be awarded. Ryan Gardner is currently owned by 1% of leagues and that still too high a number for our liking.

Meh! It’s a warranted gain that Travis Varcoe picks up this positional allocation, but is he even someone you want in your draft side? We don’t think so. Currently he’s in just 2% of teams and the allocation of this additional position will not boost it.

Since breaking into the Fremantle side a few weeks ago, Connor Blakely has been allowed to play his preferred role through the midfield. The dockers are playing a high possession game style that is profitable for fantasy football coaches. It’s seen with scores of Caleb Serong, Adam Cerra and Andrew Brayshaw over the last few weeks. Thankfully Connor has been able to get in on this action a little bit with two 70+ scores in his previous three games. As always for players who gain centre status, it just adds squad versatility more than scoring benefit to your draft team.

The Tigers have done well over the festival of footy to expose as many players as possible to some AFL game time. One of those is Sydney Stack. The classy ball user has been given a reasonable go through the midfield over the last month. He’s scoring OK, but nothing amazing. And as a back now with DPP he just offers you cover should cover in multiple lines if you get stuck for a player.

A seasonal average of 58 is being elevated by a five-game average of 73. Mark Blicavs is one of the Mr Fixit options at the disposal of the Geelong coaching staff. The athletic beast is equally as capable as playing a lockdown defensive role, as he is as a relief ruck or a tall winger. His hitout numbers have seen a significant boost over the last month. However, is Blics playing as a ruckman? Not according to the team at UF! One can presume it’s more as an around the ground role as a midfielder/wingman that he’s been getting these chances in their eyes.

With Nic Naitanui taking the lead ruck role the Eagles have often used another tall as the relief ruck. West Coast turned to Oscar Allen to help bring some support. This year he’s averaging career-high hitouts a game and providing viable support to NicNat. While it might not appear to have much benefit, this could be hugely helpful in deeper and category scoring leagues.

In the past few weeks, Lachie Fogarty has shown his scoring potential. Over the past five weeks, his scores have included a 65, 87 & 61. These scores are reasonable as a centre, but now with the allocation of forward status, he is undoubtedly a substantial stash on your forward bench if nothing else. The challenge for him is about retaining a role inside the Cats best 22. While he adds plenty of defensive efforts and speed to a Geelong forward line, the cats are about to welcome Luke Dahlhaus back into the team from injury. Can he score well when playing? Absolutely! Is his role in the side secure? Far from it!

He’s found it hard to crack into the GWS side over his time since being drafted. However, Jye Caldwell is starting to craft a role for himself in the team primarily as a forward. His burst of acceleration, goal sense and defensive efforts have seen him be rewarded with five consecutive games. As a centre only option he’s not someone even worth considering as an emergency cover, but as a forward, he brings some value and given he’s in only 46% of leagues you’ve got a chance to snag him off your player market with a waiver wire pick. A vast majority of those would be keeper leagues too.

A season-high 74 and three additional scores over 50 mean that he won’t set the world on fire, but he now becomes draft relevant all be it only by a smaller amount.

He’s only a relevant player in keeper or dynasty leagues but expect over time the Crows to give Ned McHenry a chance. The Crows invested in a first-round selection, and since his debut earlier this year Ned has been given limited midfield minutes. Keeper league owners will be hoping this small forward who has shown the potential in the SANFL to play up the ground is given his chances. In his first season at SANFL level, McHenry averaged 18.1 disposals (at 77 per cent efficiency), 5.3 marks, 4.5 tackles, 1.6 clearances, 2.8 inside 50’s and 1.8 rebounds.

Where’s Nat Fyfe, Patrick Dangerfield, Dayne Zorko or any other player that you feel is missing? One of the things that make UltimateFooty unique is that for a player to be awarded DPP they must be playing 70% of game time in this new position. So why has your player missed the cut? Likely that in the data it would suggest they haven’t spent enough time in that role. 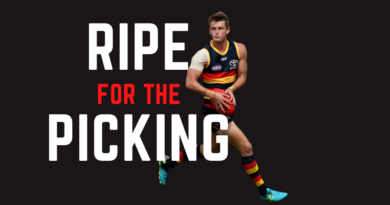