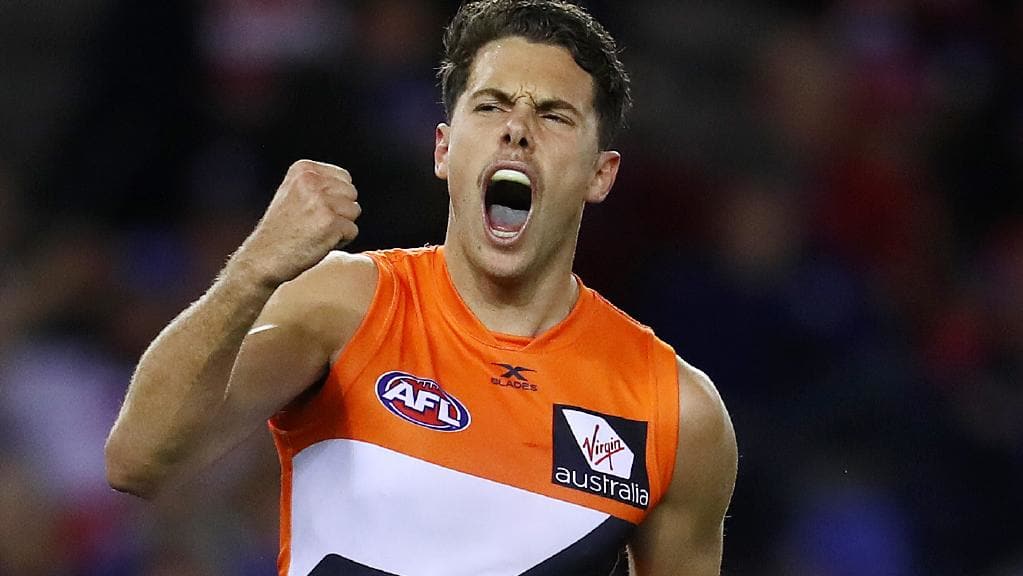 Josh Kelly is one of the most enjoyable players available for fantasy coaches to own. The question is, will 2019 be a turn of injury luck for this elite midfielder?

Over the past few seasons, Josh Kelly has transitioned from an early draft pick with plenty of potentials into one of the AFL’s elite midfielders. Whether it be inside the contest extracting the ball and farming it out to his teammates, burning opponents on the outside with his silky skills or his ability to impact the scoreboard Kelly is the complete modern midfielder.

Injury stalled his season, but he was still able to deliver plenty of strong scores. From his 15 games last year he averaged 26 disposals, 18 of those were uncontested, seven score involvements, three clearances, five tackles, four marks and six inside ’50s per game. From an AFLFantasy/DreamTeam perspective, he scored eight tons, four of which were above 120 and two over 150. In SuperCoach it was seven tons and an impressive five that were above 130. One of those scores was dominant performance against the Blues. In that game, he had 41 disposals, ten clearances, 16 score involvements, five tackles, seven marks, four goals and a SuperCoach score of 205. To top his season off, he didn’t dip his scoring beneath 80.

These scores echo his breakout season from the year prior. In 2017 from his 21 games played for AFL/DreamTeam he posted fifteen tons, six of those were over 120, he had just one game where his scores dipped below 87, and he ended the year with an average of 112.9. While in SuperCoach he registered sixteen tons, seven of which were over 120, just the two matches he scored beneath 90 and ended 2017 with an average of 113.8.

Not many players carry the fantasy ceiling that Josh Kelly possess, and when he gets on a run of scoring, he can very quickly advance or equally destroy your rankings dreams depending on whether you own him or not. Over the past two seasons when he does register a triple figure score, he averages 126 in SuperCoach and 124 in AFLFantasy/DreamTeam.

The inclusion of DreamTeam joining SuperCoach with a rolling lockout means we now get potentially two bites at the captaincy cherry. Someone like Josh Kelly has given his proven scoring ceiling captaincy option. Before the bye, GWS have no Thursday or Friday night games and only four games that are the first game of the Saturday, meaning the rest are later on in the weekend and Kelly becomes the perfect foil for a second shot at a captains call.

Many opposition sides that did choose to employ to services of a tagger in the midfielder against GWS would almost always send them to the now departed Dylan Shiel. With his exit from the club, Josh now becomes the #1 target of opposition coaches to stop. Not many clubs possess a player capable of preventing him, but it’ll be a new challenge now being the clear top target to negate.

An interesting trend happened with Josh’s season last year. Every ton he scored coincided with a victory for GWS. Of these tons, they included victories against lowly ranked sides such as Carlton, Gold Coast, Western Bulldogs, Brisbane, St Kilda and Port Adelaide. While correlation doesn’t equate to causation it does create something fantasy coaches should ponder especially in light of the problematic fixture for GWS early on.

Between rounds one through to six they take on: Essendon (home), West Coast (away), Richmond (home), Geelong (away), Fremantle (home) and Sydney (away). It’s not out of the realms of probability that they start the year with just one or two wins. Thankfully, the fixture opens up from that point on with matches against St Kilda, Hawthorn, Carlton, Melbourne, Gold Coast, Adelaide and North Melbourne before the bye.

If his scoring trend of big hundreds when GWS wins continues then, he’s certainly more of an upgrade target. That said if he delivers scores as he did in 2017, it doesn’t matter who he plays he’ll find a way to score well regardless.

Josh Kelly and his Giants will get a much-earned rest in round 14 but to upgrade him after the week off is too late in the season. By then the scoring damage would well and indeed have been done, and an upgrade would be just putting a bandaid on a likely hemorrhaging season. If you choose to upgrade Kelly then target when you bring him in, my suggestion is after the round six battle of the bridge.

Right now I’m making him my first midfield upgrade target in every scoring format. Even though I’m not starting him due to some of the above concerns only injuries would prevent me from ending the season with him.

Across every scoring format, he’s a sure M1 selection and a worthy choice in the opening round especially if your first pick is outside the top 3. In a new keeper league, he’d go in a similar position, while an existing league you’ve got minimal chances of getting him out of the hands of the current coach. Once you come across 110 averaging midfielders, they become very hard to pry out of the hands of coaches.