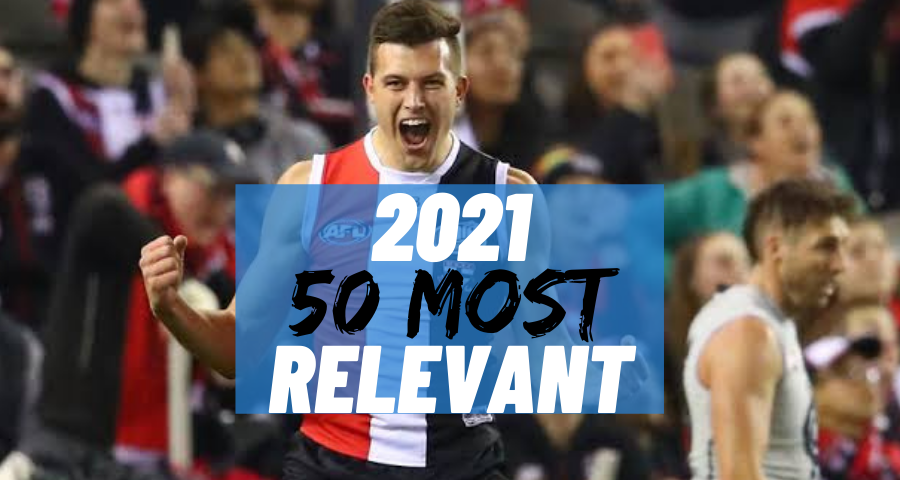 After sharing the ruck role in 2020, Rowan Marshall has gained one of the most helpful DPP’s in the game. Will you be starting the St Kilda star in your squad?

After a stunning 2019 it was a slow start to the season for Rowan Marshall. Understandably so given the number of changes into the Saints outfit the previous trade period.

Over his first 7 games of the season, Marshall posted just three scores over 70 in AFLFantasy/DreamTeam and 3 over 82 in SuperCoach. However, from that point on both he and his Saints found form.

Over in SuperCoach, his seasonal average was 103; he scored 8 tons, had 2 monster scores over 140 and didn’t drop a score below 70 all season. What a great demonstration of a player who boasts both high ceiling and high scoring floor.

Not a bad seasonal performance, especially considering he was ruck sharing with Patrick Ryder. So how much ruck split will the two share in 2021?

Firstly, I believe the longer quarters and the reduced interchanges should increase his time on the ground. Ultimately, the longer you spend on the field, the greater the opportunity to increase your scoring grows.

Second and finally, with Paddy Ryder turning 32 and coming off the back of a serious hamstring tendon injury it wouldn’t shock me to see the role splits drift further. By this, I mean that Marshall should get the bump of more time in the ruck over Ryder. Should this happen, then we could see a repeating of the 2019 scores.

Nobody wishes injury on anyone, but if Ryder misses big chunks of the year, then Marshall’s already strong stocks increase again.

So why did the Saints chase Patrick Ryder? Thankfully, it has nothing to do with any deficiencies in the game of Marshall. Instead, his recruitment is to help protect the development of Max King. With Josh Bruce’s departure, another tall forward target (that could help relief ruck) was required. Ryder allowed the Saints to protect King for another season or two while also further enhancing Marshall’s tap work.

When picking any player that plays through the ruck, they need to have a consistent scoring base in two core areas. Firstly, through hitouts and hitouts to advantage.

As a sole ruck in 2019, he averaged 28 a game. This scoring basement means that before he does anything else in the game, he’s already a third of the way to a score in the 90’s for AFLFantasy. In 2020 he hitouts dipped to average 14 per game. No surprise due to the ruck sharing.

This scoring dip was positively minimised, with nearly 1 goal every 2 games to a goal per game. With a return to full quarters, these two scoring lines should see steady growth.

Based on statistics, Marshall clearly grew as a threat inside forward 50. With Max King developing further this year, Marshall might get some weeks with a super favourable matchup inside attacking 50.

Finally, can they impact the game around the ground? In 2019 averaging 17 possessions, four marks and three tackles. In 2020 his possesions count dipped by 3 per game, but that’s largely due to shorter game times. Positively his marks per game stat line held strong.

His addition of RUC/FWD DPP lets you as an owner do two things. Firstly, hedge your bets on a Braydon Preuss style stepping stone ruck at R2. Preuss plays both Max Gawn and Brodie Grundy inside the first few rounds. While everything seems to have aligned for him to be a great stepping stone, Marshall’s pick is added security. If he flops, use DPP to move Rowan into the ruck line and move Preuss onto the stepping stone that pops.

The second thing it does is he can help save you trades in season. By selecting a non-playing R/F at R3, you can easily move Marshall into the ruck division should an injury, suspension or late out hit.

His RUC/FWD flexibility is a huge arsenal in his selection, but it is dinted by the R14 bye. He’s part of the dreaded rounded where can’t use him to cover for Gawn, Grundy or O’Brien.

Rowan Marshall is sliding under alot of coaches noses this preseason, and astute coaches hope that trend continues. If he doesn’t end up in your starting squad, you’ll want to consider him as an early season upgrade at the very least.

In drafts, versatility has arguably an increased relevance, especially if you can use DPP to its full effect. I rank Rowan Marshall in a similar tier as both a ruck or forward. He’s not in the top tier, but you can build a case he’s in the mix for the following level down.

It’s why I think somewhere between the 4th-5th is the sweet spot for drafting him. That DPP gives you options. You can take a late flyer pick on another speculative ruck such as Sam Draper or Oscar McInerney. If they pop, an 85+ average, roll Marshall FWD and kick off the F5 you currently have rolling on the ground. . If not, you’ve still got solid R1 insurance on your bench cover.