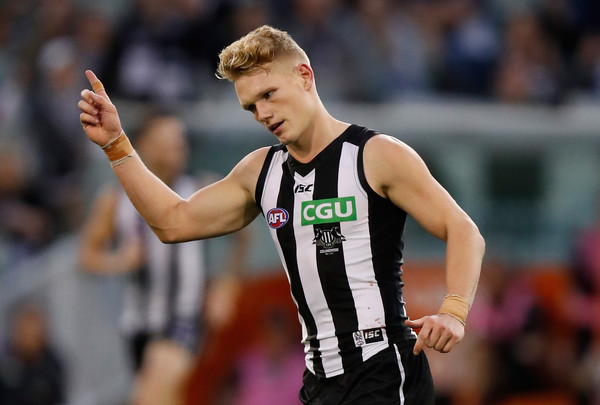 For the past five seasons he’s averaged over 100 in every format, but can this star midfielder get back to elite midfield fantasy numbers?

Adam Treloar is one of the most consistent and safe 100+ averaging midfielders no matter the format you play. Ever since 2014, he’s posted a seasonal average above the ton every single year. in all formats since 2014

While we always want to own a player the delivers statistically what can’t be undersold is the enjoyment owning certain players can bring as they are just fun to watch. Personally, I find Treloar as one of the most enjoyable players to own in fantasy and watch in AFL in general. Adam wins plenty of his own ball, he posses a great burst of speed away from stoppages, can get on the outside and link up and impacts the scoreboard. Last year he averaged 29 touches a game, at 68% efficiency, averaged 7 score involvements a game & 5 inside ’50s to be among one of the most elite midfielders and fantasy scorers in the game.

Last year a serious hamstring injury in round 14 against the Blues early in the 4th term ended his home and away season. Prior to the injury, he played every game and had scored 9 AFLFantasy/DreamTeam tons with 3 of them over 130 ending the year with an average of 108. While in SuperCoach he posted 10 hundred plus scores, 4 of which were above 130 and a seasonal average of 109.

As impressive as these conversion rates for tons are it’s still a fraction off the pace from his best fantasy footy season ever where back in 2016 he averaged over 111 in all formats played every match and posted 15 AFLFantasy/DreamTeam hundreds and 16 in SuperCoach.

His fantasy scoring ceiling and frequency of hundreds mark him as a player that most weeks you can genuinely consider as a captaincy option and with the season-ending injury to Tom Mitchell this becomes even more crucial. Over the past 2 years ‘Titch’ was often left as a set and forget option meaning sides often didn’t have many variations between captaincy outputs. Now with no Mitchell guys like Macrae, Grundy, Cripps, Merrett, Gawn Oliver, Fyfe and yes Treloar among others all could be someone’s captain meaning with so many variables we could see a 100 point output and the difference just on captains selections only.

More unique variables only make for a more interesting competition and the need for multiple players within your side that could wear the captaincy armband most weeks something that Adam Treloar certainly is with a high ceiling and consistent triple figure returns.

While it’s purely speculative the biggest question mark around selecting not just Adam Treloar but any Pies midfielder is the impact on their fantasy scores and midfield time with the trade inclusion of Dayne Beams. This inclusion into the side will only aid and not hinder the scoring potential as Adam will not be one of those who’s midfield rotations see a decline. Instead, I believe it’ll likely be one of or a combination of fringe players such as Chris Mayne and James Aish that are squeezed out of the midfield group. Also, some more clearly defined roles especially for Steele Sidebottom on the outside with the need for him to not be used for winning clearances but instead now being the first touch from the clearance.  Furthermore, the inclusion of Beams probably makes him a potential 3rd in line option to cop the opposition tagger with many sides choosing to lock down out the damaging Steele Sidebottom who late last year was cutting teams apart on the outside of traffic.

I still think there is growth in him not just based on his 2016 numbers were he has averaged 110+ before but also because his current seasonal average includes the match he injured his hamstring early in the 4th term against Carlton. If you were to do his annual average based on ‘healthy’ games, he averaged 110 in SuperCoach 112 in AFLFantasy and had only one score beneath 90 in AFLFantasy/DreamTeam and 2 in SuperCoach.

While we talk of last seasons injury, it needs to be noted that beyond this severe hamstring injury he’s had an incredibly strong career to date. Outside of last year where he missed the final eight games of the season he’s he’s only missed six games in the past five years

In the opening six rounds of the year, Collingwood has 3 Thursday night games and two night matches meaning he’s a perfect unique candidate for a vice-captaincy as many will be looking at his teammate Brodie Grundy. For me, I’ve got Adam in both my DreamTeam & AFLFantasy starting squads and am seriously considering him in SuperCoach.

I rank him as a top 10 averaging midfielder across all formats so as such he’s an M1 selection for me. While he wouldn’t be a stretch to select him with your first selection overall chances are you’d be able to land him on the wrap around in the second round and either lock him as a super strong M2 or locked alongside a top 2-3 scorer in another line.