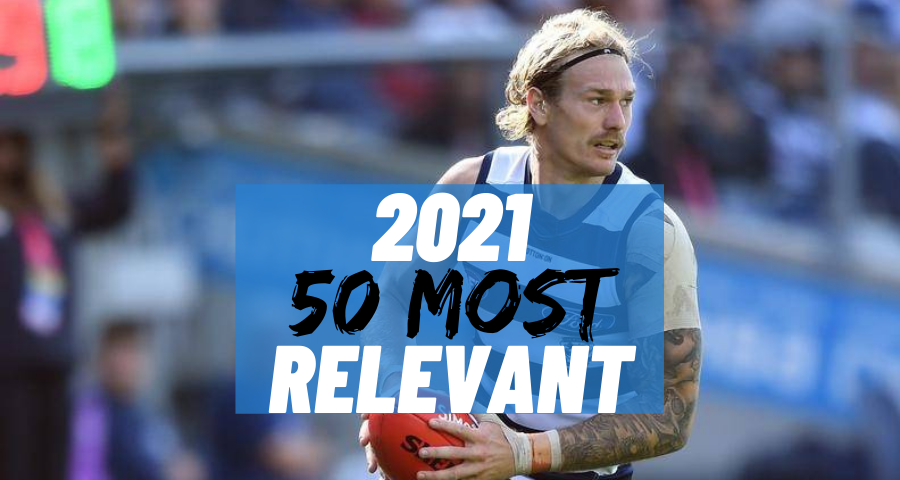 If you have owned Tom Stewart at any point in the past two seasons, you’ll have been thrilled with his scoring. He looks set to be another top tier scoring defensive premium in 2021.

WHY IS HE RELEVANT

The 2020 AFL season didn’t end the way Tom Stewart and his Geelong Cats would’ve liked, but for fantasy footy coaches it was another strong season from the multiple time All Australian.

For SuperCoach last season Stewart ended the year ranked 10th by averages for all defenders. His year started strong with scores of 100, 119 & 84 before an in game injury against Melbourne saw him miss the next few matches.

Even with missing three full games through injury (it was closer to four given how early he busted his shoulder) he still outscored Jack Lukosious and Dan Houston, who played every game and had ownership of over 10% by seasons conclusions.

Stewart wrapped up his SuperCoach season with just 2 scores below 84, one of those was his injury game. Also, the last 7 games of the year saw him score 7 consecutive tons and averaged 111.

In AFLFantasy only four players had a higher average than Tom Stewart. As impressive as that is, it’s actually quite misleading. One of those was Jeremy Howe playing just four games, while Alex Witherden was another but he too only played a handful of matches.

In reality, it’s really only Jake Lloyd and Rory Laird who ended 2020 with a higher average. Additionally he ranked 21st for total points. Not bad for a player who missed almost 20% of the season.

His average of 77.1 (adjusted 96) consisted of one ton, three additional scores between 90-99 and five further scores over 80. Removing his injury impacted game his scoring dipped below 80 in just 5 games. With 80 being the 100 of 2020, that’s some impressive consistency from Tom.

Removing a players ‘injury affected’ scores to highlight a seasonal average can sometimes dilute the reality of a players scoring. However, when it happens inside the opening few minutes of a game, I’m more comfortable with it. Removing that injury impacted game would mean his seasonal averages read as a 106.46 in SuperCoach and 81.7 (adjusted 102) in AFLFantasy/DreamTeam.

2020 while being his career high SuperCoach season, it’s far from an outlier of scoring consistency and ceiling. During the 2019 season, he finished the season with the second-most points behind Jake Lloyd. He had the seventh-highest averages (98.2) of all defenders and scored at an average of 1.2 points per minute. He had eight scores of 100 or higher scores from his twenty-two games, three of which were 120 or above.

For AFLFantasy/DreamTeam Tom Stewart also had a phenomenal season. He was ranked the fourth-best with only Jake Lloyd, Rory Laird and Jack Crisp scoring above him for total points of defenders. While for averages he ranked sixth. Across the season he posted eight tons including three that were 110 or higher. His scoring consistency was also on display in this format with only two scores below 80 all season and a seasonal low of 73.

We now have multiple years of consistent scoring premium seasons from Stewart. Yet, his name has barely been uttered as a starting squad candidate. Sometimes in the fantasy footy community, we spend our time chasing the flashy new breakout candidate at the expense of taking something dependable. That’s not wrong to do, but with a player of Stewart’s reliability and scoring capacity it’s criminal the lack of preseason discussion around him.]

When selecting a premium on any line, you want to ensure that they deliver quality scoring from the opening round. With Geelong playing Adelaide round one, Tom Stewart owners should be frothing.

Last year the Crows were one of the easiest teams for defenders to score against. Yes, Adelaide did improve as the season went on, but the entries inside forward 50 weren’t great. It’s the perfect storm. An intercept defender playing against an inaccurate and developing side and he also takes kick-outs. It’s a promising start. Last year he scored 117 in SuperCoach & 84 (105 adjusted) in AFLFantasy.

Why are people choosing to pass on Stewart? Recast your eye over some of the scoring I highlighted earlier. He has a strong scoring ceiling, high basement and is generally durable. Honestly, the main reason is he’s not the flashy pick of Rory Laird, Lachie Whitfield or Jake Lloyd. Neither is he a value pick. What you’ll pay for with him is what you’ll get.

Barring injury in all game formats, I project him to be a top 5 averaging player this season. It’s for that reason I’d certainly consider him as a genuine unique for starting squads. While others are ‘zigging’ for the popular picks, you could zag and get yourself a solid start.

He’s a strong candidate for starting squads, but for me Tom Stewart is an upgrade target. For me the defining factor is his bye round. He has his bye round in week 12. His Cats share the week off with Suns, Hawks, Port, Roos and Giants. Honestly, beyond Nick Haynes, there aren’t too many defensive premium options.

At some stage, you’ll want him in your squad. And whether it’s an upgrade or starting squad, I think owners will be satisfied for the entirety of time they own him.

The ‘Three L’s’ of defence in Rory Laird, Lachie Whitfield and Jake Lloyd will all be gone in many leagues inside the first 15-20 selections. If you miss out on one of these three, I’d still happily have Tom Stewart as my D1. I see him going off draft boards anywhere from the third round through til the early fifth all dependant on peoples preferences.