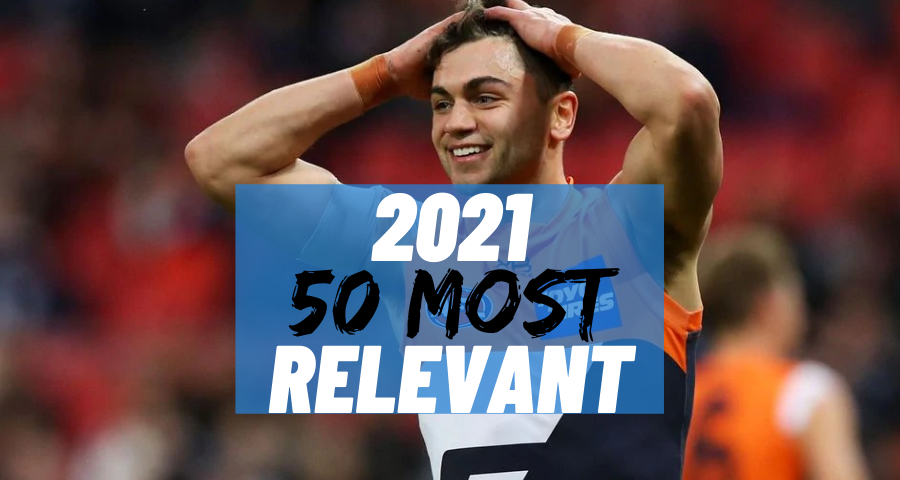 Heading into the 2020 season, Tim Taranto was coming off a breakout season. However, a preseason game injury ruined most of his year. 12 months on, can Taranto ‘pick up’ where he left off?

The season could not have had a disastrous start to the season for the Giants. Tim Taranto injured his shoulder within minutes of the club’s first Marsh Series match against Sydney.

Had the season not been delayed by covid we would have rarely seen Taranto play. However, because of it, we got to see him play 11 games across the year. Taranto still clearly wasn’t 100% back to full confidence in his body, and even his role in the final few months of the year indicated that.

Even with it, Tim still delivered some reasonable scores. He averaged 75 in AFLFantasy/DreamTeam (adjusted 94) which consisted of 2 tons and 2 additional scores over 90. While in SuperCoach he averaged 84 and posted 3 tons.

At times Taranto was played out of the midfield. At the time GWS gave little explanation for why. It meant we saw such a drastic scoring differential in games scoring. In 3 games during the back half of the year, he had minimal CBA’s, and in these, he had 15 possessions or less.

The benefit for us is that these lower scores and underutilised role have meant we’ve got embedded in further value. If ‘TT’ can get anywhere near his 2019 scoring, he presents one of the season’s best buys.

That year from an AFLFantasy/DreamTeam perspective last year he finished as the fourth-highest total points scorer of the season behind Brodie Grundy, Adam Treloar and Jackson Macrae. Of midfielders, only Jackson Macrae, Adam Treloar and teammate Josh Kelly had a higher seasonal average. From 22 games he had fifteen scores over 100, 7 of these were over 130.

In SuperCoach he increased his average by 14 points per game from his 2018 average. Taranto finished as the 22nd best points scorer of the season and an average 102.

For multiple seasons Taranto has proven his scoring pedigree. And if he can return to his career year of 2019, he’s priced 18 points unders in all game formats.

Value is the name of the game in 2021, especially if you want to start multiple of last seasons big performers on each line. You can’t start all of the top tier players, while it feels good to have them all you end up with a rookie heavy on field result. It’s why players like Tim Taranto offer proven value, not just prospective.

It’s an important distinction to make. The potential value is based purely on forecasting and projections. Proven is about someone who has been there before.

Why is he cheap? Ultimately, Taranto didn’t get that midfield role as frequently as in previous years. Is that because of injury needing him to be eased into it? Or GWS experimenting with a different midfield mix? Ultimately only those part of the inner sanctum of the Giants will know.

What’s clear is the Giants need to make some changes in 2021. The game style, mindset and personnel used at the end of the season isn’t advancing them back into finals contention.

Taranto finds himself in the positively rare position in that he will never get tagged from the opposition. With Lachie Whitfield, Stephen Coniglio and Josh Kelly in the side you cannot choose to try and negate his influence on the contest and let those three roam free. Yet another positive for those keen on picking him.

I’m starting Tim in AFLFantasy, and he’s right in the mix for DreamTeam. For SuperCoach it’s a pass even though he’s a solid value option. I think there are stronger options priced around the same range or cheaper.

In drafts, it only takes one coach to be keen on them to go off the board early. I can see some drafts, especially AFLFantasy scoring formats where he could go as early as the third round.

The earliest I’d be comfortable with drafting him is an M2 in AFLFantasy and M3 in SuperCoach. Who knows, he might drift a spot later depending on the quality of coaches in your league.