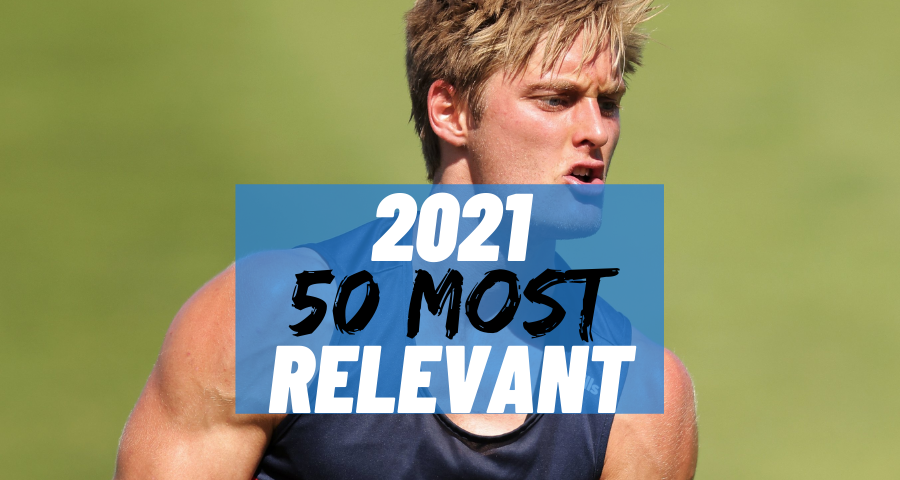 It took former first round selection Jackson Hately going the long way via the pre-season draft to landed at his club of choice. Now at Adelaide, can he become one of the breakout midfielders of 2021?

The move to Adelaide probably took him a few weeks longer than he’d prefer, but finally, Jackson Hately is an Adelaide Crow. With Adelaide holding the #1 preseason draft selection, the club was able and ultimate used this way of getting him to the club from GWS.

In his draft year of 2018, Hately, who was eventually selected in the opening round was viewed as a ready made midfielder who had the skills and physical tools to become the perfect modern day prototype footballer.

Like many young midfielders that go to the Giants, he struggled to crack into the GWS midfield. In 2019 when he debuted against Fremantle, he delivered one of the most memorable first games for fantasy footy coaches. He scored an 84 in AFLFantasy and 95 in SuperCoach.

He followed up with another 80 the next week for AFLFantasy while 3 of the next 5 games following he scored between 67-69. Sure, not amazing. But for a first year player who’s getting zero midfield allocation that’s a rewarding start.

Last season in round 3 he played against the Bulldogs and it was by far his best game of the season. In this clash, Hately was given some midfield role and he certainly took the most of his chance. That game he had 21 possesions, 7 marks, 2 tackles, an 80 in AFLFantasy (adjusted score 100) and a 108 in SuperCoach.

It’s dangerous to give too much credential to the preseason community series scores. The reason being these are often experimental games and lack none of the defensive pressure of an in season match. That said, last year Hately was allowed to play through the midfield in the preseason games and returned scores of 85 & 94 in AFLFantasy. While in SuperCoach it was even better with a 129 & 92.

Take those scores with a grain of salt, but it does give fantasy coaches some encouragement that he can deliver for us when the right opportunities present themselves.

Former GWS players leaving after two seasons have a reasonable history of seeing a fantasy football scoring boost at their new club. Dom Tyson moved to Melbourne heading int the 2014 AFL season and increased his AFLFantasy average from 51 the year prior to 90. While in SuperCoach it was a 49 points leap to average 93. Jack Steele after landing at St Kilda elevated his fantasy out too by 21 points per game in AFLFantasy and 28 points per game in SuperCoach.

What was the cause of the drastic scoring bump? They were both talented players who found themselves starved of opportunity in a star studded Giants midfield.

Jackson Hately didn’t leave GWS due to homesickness. He left the Giants in the hunt for more consistent league footy and a central role in the midfield. Thankfully for him and perspective fantasy footy coaches, he’s come to a side in Adelaide that will enable him to do that straight away.

But what role will he play at Adelaide? To see the scoring uptick of a Tyson or Steele, he’ll need a similarly prominent role.

Despite he’s shape and size he’s not the inside clearance player of a Patrick Cripps or Lachie Neale. While he can and does play through the inside, Jackson’s greatest asset is using his endurance and athleticism to outwork opposition players.

Whenever his new teammates speak of him, it’s always these skills that are quickly lauded. It’s why for me I think the best and most likely role for Hately could be to have him hold down a key wing role. He’s not lighting quick, but he does have a similar skillset to another former giant in Adam Tomlinsion.

Hately can outwork his opponents to get into damaging spaces to set up forward momentum on the wing. At over 190cm, he can use his height and clean hands to create a viable outlet kick option when the defence is under pressure. Then around the ground in stoppages, he can then float in and out of the contest depending in the club’s midfield rotation at that moment.

If Hately does play a role less centre bounce centric then hitting the scoring heights some in the fantasy community are hoping might be a little too far fetched. Beyond Andrew Gaff, it’s rare for a wingman to consistently scoring premium numbers.

I’d be surprised in AFLFantasy he pushed his average into triple figures. But certainly, something north of 85 is very attainable. For SuperCoach, he’s shown he’s very capable of scores in the high 80’s to 90’s range. I wouldn’t be surprised to see him deliver that for a full season.

When selecting a stepping stone style player regardless of the line available for selection, the player’s bye round needs to be considered. Hately and his Crows have given you the perfect scenario with the club part of the final multi bye round. This enables you to carry him through the best 18 weeks of round 12 & 13 and then upgrade him to a premium that’s already had a rest.

Are there better options around his price? In DreamTeam, I believe there is. He’s $100k more than Essendon captain Dyson Heppell, and should he (Heppell) be fit and fitting by round one it’d be a brave call to back in Hately over a player who’s averaged over 90 in 6 seasons.

In AFLFantasy, we need inbuilt value into many of our starting squad selections. For me, Hately is an easy selection. At his price point you can easily pivot down or across to a better stepping stone if he fails to deliver. While conversely, he should generate a comfortable $100k if not more while scoring well in your side.

Based on the limited games he’s played, SuperCoach does feel like the format where he’ll be at his scoring best, and for me, I feel the most comfortable in selecting him.

I have Jackson currently in my starting squad in both AFLFantasy and SuperCoach and can see him in these formats especially being a popular pick.

For that reason; some coaches will have the confidence to potentially ‘take him on’ and bet against him by passing on him whether that be with another stepping stone, or moving to a more ‘guns and rookies’ selection criteria.

At the very least, if you’re in the market for a midprice player who can score well and get you to a premium quickly. Then it would be best if you kept Jackson Hately on your watchlist at a minimum.

His selection range will largely be determined on your draft day if his level of preseason hype increases or stagnates. There is plenty of potential and upside but is it enough to make him worth reaching for? I don’t believe he’ll be the player that determines the ultimate success of your draft side.

The earliest I’d ‘reach’ to picking him is your last on-field midfielder at M8. However, I’d feel most comfortable having him as a bench cover option.