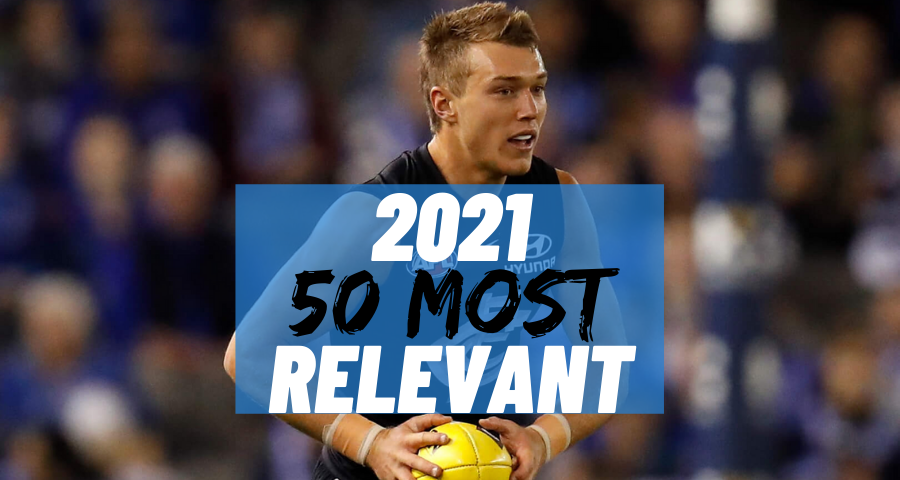 Over the last few seasons, Patrick Cripps has been one of the most prolific fantasy footballers. After a down 2020 season, will he bounce back to his premium scoring ways?

Up & down season for patrick and his blues. Moments where the footy public genunely believed they were ready for finals. then others where the ‘old Blues’ would appear and get hammered for big chunks of games.

2020 was the second time in his career he’s played every game. Even more impressive given the condensed fixtures and Cripps so banged up by years end, he required a shoulder reconstruction.

Looking at his AFLFantasy/DreamTeam averages, it was his lowest since 2015 where he averaged 86. Last year he didn’t score a ton but did have five scores between 90-99 and additional 3 x 80+ scores. In full length quarters that’s poor, but it shorter quarters last year in AFLFantasy scoring 80 was the new 100. So while it’s certainly well below par, it’s not as horrific as the stats initially first might suggest.

Across his 2018 and 2019 seasons combined he had only 7 scores beneath 90 from 42 games. Clearly indicating that in 2020 he was well below his regular output.

Speaking of his 2019 SuperCoach season he had 13 games where he scored 100 or more, nine of these he went over 120 and finished the season with an average of 117.

On first glance, he appears about 10 points per game of value in DT/AF and potentially 25-30 in SC if he can return near his best.

Why the scoring drop? For a Patrick Cripps quality player, you don’t just fall off a scoring cliff for no reason. He struggled due to knee injury in round 14 against the Pies in the final month, whether it’s causation or correlation is something fantasy coaches may choose to debate.

If you believe he’s closer to being front of year cripps as opposed to final weeks then he’s got some inbuilt value.

When selecting players as premiums you always want to be on a player that has a strong start especially in round one. Thankfully for those who want to start Cripps his recent round one history is strong

Is 2021 the year the ever going Carlton rebuild finally delivers a finals finish? Several things need to happen, but one of the major factors will be increased support through the midfield.

Contrary to popular opinion I don’t think they need further support ‘inside’ the contest. You want Patrick Cripps in there alot; it’s where he does his best work. The development of Will Setterfield as an inside ball winner has certainly eased the load marginally.

Sam Walsh is entering his third season into the AFL and should once again take giant strides towards being an elite AFL midfielder. Walsh is a fantastic complementary tool to both players as he possesses the ability to be an inside/outside midfielder.

In theory, Zac Williams is the exact type of midfielder they need. He possesses line breaking speed, a touch of class and is a perfect second touch midfielder. What fantasy footy coaches are pondering is how Williams’s addition into the midfield and development of Walsh and Setterfield help or hinder Cripps scoring?

I don’t believe it’ll help raise his ceiling if anything it might dip in a minor way but his scoring basement should elevate. With greater support around him, opposition midfielders no longer just have to limit the impact of one player to gain ascendency.

A quick glance over the career of Cripps is that he tends to be a ‘feast or famine’, scorer. By that I mean, he goes on scoring runs that are 20+ points either side of his average scores. One of the major contributing factor in that is a tag.

Looking over the opening few months, they play Richmond, Collingwood, Fremantle, Gold Coast, Port Adelaide, Brisbane, Port Adelaide, Essendon, Western Bulldogs, Melbourne, Hawthorn, Sydney and West Coast. Outside of Greenwood (Suns) and Yeo (Eagles), I don’t see an opposition midfielder who has the defensive skills to clamp down on him effectively.

The concern of his recovery from a reconstructed shoulder is a valid one. Because of it, he’ll have a limited preseason heading into round one. However, at his age (25) the most important part of the preseason is getting the athletic and fitness base established for the season. He can still do those things, even some skills work. Rather, expect him to wear the ‘orange cap’ in training and match simulations and avoid contact work.

SuperCoach has always been his preferred scoring format. It’s this setting that I’m most excited about him. He’s priced 27 points under his 2019 average and 29 points below his 2018 year. In this format, he offers supreme value if he can get back to the 115+

Consider it another way, Lachie Neale ($721,800) is priced almost $200k cheaper than Cripps ($523,700.) For the same cost of Neale and a cash cow, you could instead select Cripps and Jackson Hately ($310,300). I know which pairing I’d have more confidence in cumulative scoring more. Yes, Neale, last year was always a captain option. But historically Cripps is a very similar candidate.

With less cheap cash cows to select from than ever before we need to be making the most of our starting salary cap. It’s moves like this that could help you fly out the gate both with points on the field but cash generation.

Worst case scenario feels like Patrick Cripps would deliver a 100 in SuperCoach. And in this scenario, given his ceiling potential, that’s not a horrible M8 given the initial outlay of investment. At this price, it feels like a low risk and high reward if he does get back to his 115+ days. I’m all in on starting him there.

Playing out a similar ‘worse case’ scenario’ then in AFLFantasy, he should make you a quick $50k. While again, the best case scenario is a cheaper end 100+ averaging keeper. DreamTeam you’ll want to start him in that format only if your confident he’s clearing that 100 average markers.

Historically in SuperCoach if you wanted to own Patrick Cripps, it would cost you a selection in opening two rounds of the draft. In 2021, he’s going to be available later than he’s been for years. In SC drafts, he’ll be available safely as your M2 (rounds 3-4) and potentially even an early M3 selection. If he gets back to his 110+ days, it’s a huge steal.

For AFLFantasy scoring formats, he’s more likely to be picked as an M3. Crippa has the potential to push to be an M2 based on output. However, on draft day you shouldn’t have to spend that high of a pick.