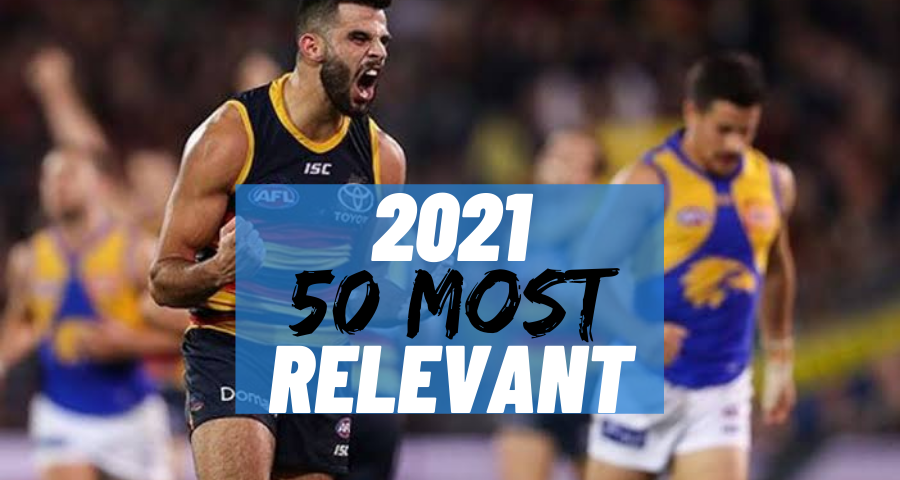 Injuries have robbed football fans from seeing Wayne Milera at full flight. Is 2021 his breakout season? I think it is.

Wayne Milera is a tease! Over the past few seasons, he has shown multiple games where he looks like he’s the second coming of club hero Andrew McLeod. The way he moves through traffic and users the ball, it’s had supporters salivating at his potential.

Even in limited games last year he showed fantasy footy coaches what he could deliver. In round one against the Swans, he scored 96 in SuperCoach and 70 AFLFantasy (87 Adjusted). This is one of only two games he played across the season. And while his injury concerns are starting to pile up, what it does mean is he’s been handed a tasty discount on his starting price.

Upon his return he delivered a further six scores above 80 including a ton in AFLFantasy/DreamTeam and three scores 96+ including a 114 in SuperCoach. Amazing, certainly not. But we aren’t paying for him to be a top 6-10 defender this year. His job is to be a stepping stone. Should anything above that eventuate that’s all well and good but he doesn’t need to be a premium.

Further proof that Milera has been giving us these scoring glimpses for years is to look at his 2018 stats. Over the final eleven rounds of the year, he dipped his scoring beneath 70 just once across the formats.

In SuperCoach he posted three tons, three additional scores over 90 and averaged 89 from round 12-23. In the same period of time in AFLFantasy/DreamTeam Wayne posted 2 tons and averaged 82.

In total if you combined his last 9 games of 2018 and first four of 2019 he averaged 87 AFLFantasy/DreamTeam and 93 in SuperCoach.

At his price point, if Wayne Milera can return an average in the ’80s up until his bye round across the formats, he’ll have more than done his job. On the chance he sneaks that average higher he might reach the level required to be a year end keeper.

Last year was Wayne Milera’s worst ever season in terms of games played and it was due to injury. Milera complained of some foot soreness. Ultimate the scans revealed a stress fracture which put an end to his hopes of further games in 2020.

Just prior to the Christmas break Wayne was slated to get involved in full training in the middle of January, and according to the club is on track.

The Adelaide Crows are in a complete rebuild. While I don’t think they’ll pick up back to back wooden spoons they still have some gaps on the list to fill before they can be finals bound again. One of the most underrated players on the club’s list that fills a critical void is Wayne Milera. For years, the club has been exposed in two key areas.

Lastly, his willingness to take the game on. Whether it be when it tight traffic, or needing to pinpoint a difficult pass, Milera thrives on pressure. A quick GIF search and you’ll find numerous passages of play like this one where Milera takes on the opposition, and through his skill and composure, he gets his side out of trouble.

The Crows can choose to use him across half back alongside Will Hamill, Rory Laird and Andy McPherson. Or they can play him higher up the ground on the wings alongside Brodie Smith, Lachie Sholl or Jackson Hately. In either role, Wayne will add to the rebuilding Crows and should maintain some solid scoring. For what it’s worth, I believe he’ll play more half back than wing.

As a stepping stone selection, Milera has the perfect bye round. He, along with the rest of his Crows, has the final of the multi-bye rounds. This will enable coaches at round 14 to look at who the best available option is coming off the round 12 & 13 teams.

At his price point, he doesn’t need to be a keeper. He could be, but you need to plan for him not to be. For those not selecting him, it’s not choosing to pass on selecting him because of that. Rather, the major concern over Wayne Milera is a continuing poor Injury history.

Since becoming part of the Crows ‘best 22’ in 2018, he hasn’t had a season that hasn’t been interrupted by injury. That’s certainly a worry for those selecting him. Especially given he hasn’t yet been in full training.

However, the flip side is the potential reward he could deliver. Ultimately there is a risk with selecting any player with an injury history. However, the question you must answer is ‘will the reward outweigh the risk?

If you play AFLFantasy, I believe he’s a relatively easy and safe pick. Currently, he’s in 12% of teams, but I expect that to be well over 20% by the start of the year. In SuperCoach & DreamTeam if your structure allows you a stepping stone defender, he needs to be right in the mix for selection.

SuperCoach drafters will be hoping he can push that average closer to 90 rather than 80. If he can do that he’ll return value of a D3, but likely be selected as someone D4. In AFLFantasy scoring, it’s a similar position. Drafting him on the day at D3 feels a spot too high, but he has the potential to be your third best defender by seasons end maybe even a low end D2.