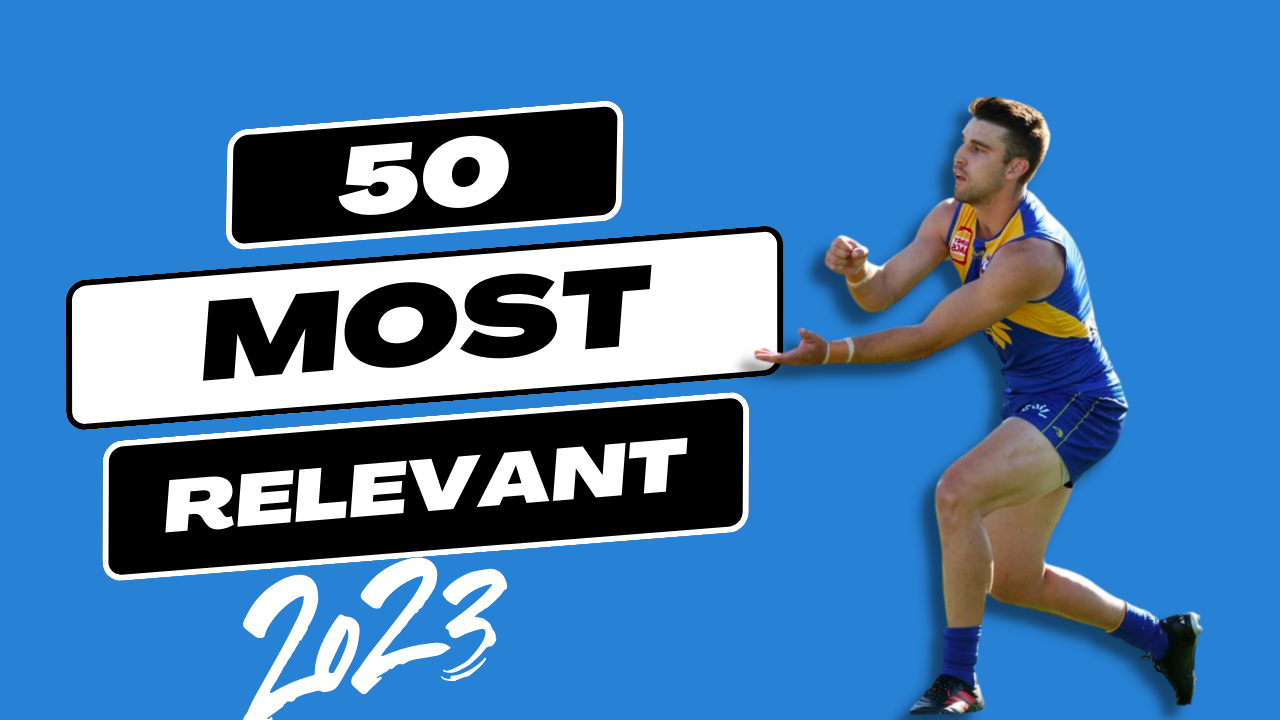 For three consecutive seasons, Elliot Yeo has had horrible luck with injuries. The three seasons prior, he delivered premium-level scores across the formats. Entering the 2023 season, the question isn’t about his scoring potential, but can he finally get some luck with his health?

Whenever you don’t see someone play to their potential, it can be easy to forget what they are like when fully fit and uninhibited. Elliot Yeo is a powerfully built midfielder who, at a stoppage, is the perfect midfielder. He’s offensively a beast at getting the clearance, he’s defensively a menace, and his workrate is elite. In addition, Yeo is athletically gifted with an excellent overhead mark and has shown an ability to play down back and become a brilliant weapon for the Eagles.

Sadly for himself, Eagles fans, and fantasy footy coaches, he’s struggled with injuries for the past three seasons. He’s played only 27 games over the past three seasons and hasn’t played more than 12 in that timeframe. He genuinely couldn’t have had worse luck. Even in 2022, he missed games due to covid, concussion and hamstring issues. The two seasons prior, it was serious groin and calf issues. 429,000. That’s the number of results you get when you search ‘Elliot Yeo Injuries.’

Even with horrible luck last year, he popped a 102 & 88 in SuperCoach, plus an 80 and 84 in AFLFantasy/DreamTeam. Not bad for a guy who started in five games last year but only played out the game in three matches.

Between 2017-2019 we saw Yeo at full flight and his scoring pedigree on full display. He missed two games in these three seasons and averaged 98.3, 106.7 and 102.7 in AFLFantasy/DreamTeam. While in SuperCoach, he averaged 102.1, 107.8 and 107.6. In these seasons, he scored in every column imaginable and was among the most underrated fantasy premiums. Yes, it’s multiple years since he’s delivered scores like this, but the ability to score like this is proven. It’s not a forecast hope like others around his price point.

Over the past few seasons, we’ve been robbed of seeing Yeo at full flight. Thankfully, he can only try to be in full health and have a strong preseason. All other past things are in the past and cannot be changed. Thankfully, the current news is that he’s ‘flying’ in the preseason. All club media reporting is looking sharp, using his skills well and is among the standouts on the track. Should this maintain over the next few months, regardless of whether he plays as a midfielder or defender, it’d be very difficult to overlook him in your side come round one.

The question has never been can Elliot Yeo produce fantasy scores? 2017-2019 scoring history demonstrates his ability. Instead, the uncertainty comes around if he get through the preseason without a hiccup?

When it comes to injury history, you are only injury prone until it’s disproven. And you are durable until your not. For years, Brett Deledio was one of the most durable players in the league, yet in his final few seasons, he could barely string two games together. Brad Crouch could barely play over fifteen games in a season for most of his time at the Crows. Now, he’s barely missed a match in his past two years as a Saint. Just because someone has a history doesn’t mean that will occur. It means that should he have an injury; you cannot be surprised by it.

Starting these ‘injury-prone’ players is the best way to offset the risk. If an injury does occur, you have banked every good score available but also spent just one trade, not multiple, on removing him from your side. The extra benefit in starting him instead of viewing him as an upgrade target is you maximise his value.

Sometimes a players role is intrinsically linked to the role they play. But with Yeo, that’s not as much of a concern. He’s shown his ability to score as a premium as an intercepting defender, a versatile forward, and through the midfield. So no matter where he plays in the preseason games, he’s not losing relevance in my eyes.

We’ve got three potential outcomes with Yeo. The first is that injury occurs early in the season, and he fails to generate points on the field or cash. And while not ideal, it can be offset easily with a move to snag the defender stepping stone or cash cow that you missed. Scenario Two, he becomes a viable stepping stone and becomes your ticket to a topline premium. That can be after the first 6-8 weeks or at the West Coast round 14 bye. Lastly, he becomes a premium that is good enough to hold until a late-season injury hits or for the season, much like we did with George Hewett last year. Option three of all scenarios can be hoped for, but it is the one you should be least banking on.

Should the tremendous run of fitness and health maintain, then I have zero concerns about selecting him. However, one setback and I’ll be abandoning the Yeo ship.

Where Elliot Yeo goes on your draft day will be determined by two things. One when you host it in contrast to the season starting. And secondly, how Yeo is travelling. Currently, it’s good news on the front of his health. Should that maintain, I can see coaches drafting him, hoping he could return D2 value, but only cost the D3 drafting range.

I will only avoid selecting him on draft day if you’ve already selected numerous injury-risk players. For Example, if you’ve picked Aaron Hall and Nick Vlastuin with your first two defenders, I’d be looking for more stability. That could be a headache your inviting into your life, regardless of how large the upside is.