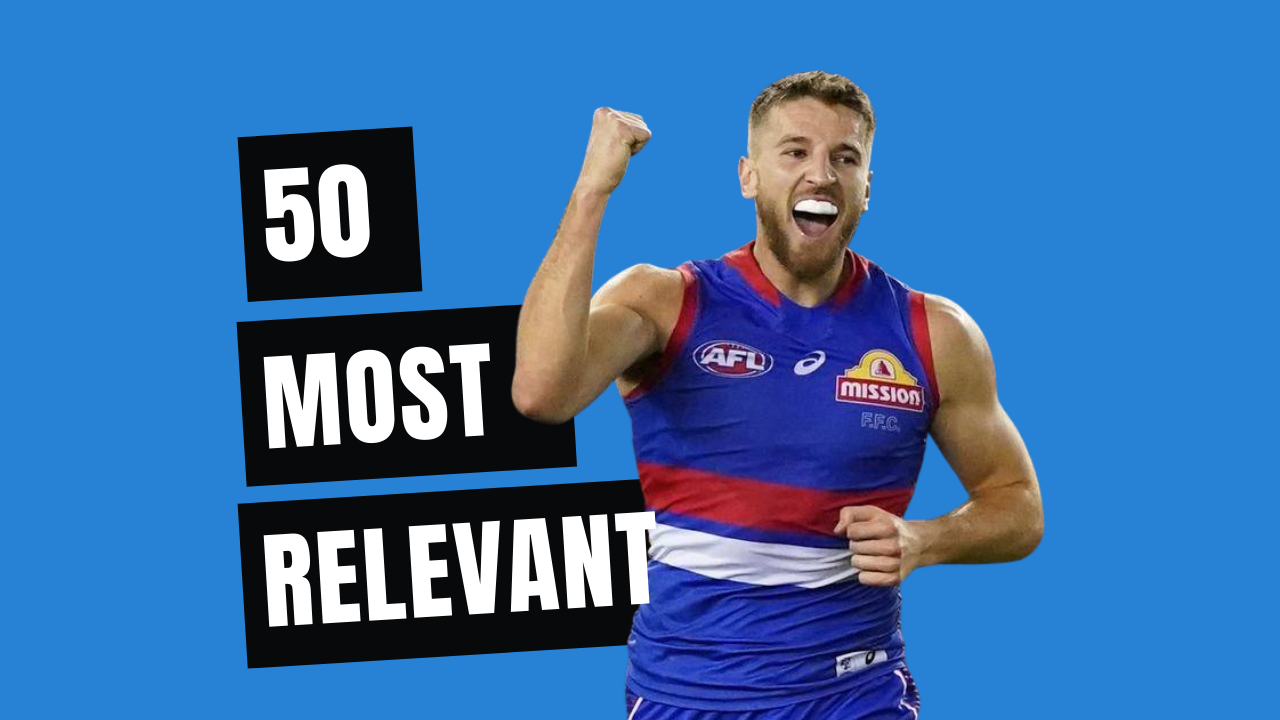 Over the past few seasons, Marcus Bontempelli has been one of the most reliable premiums for us across AFLFantasy/DreamTeam & SuperCoach. Entering into a new season, the legendary Bulldog scoring trend looks near-certain to continue.

Pretty much since his second season in the AFL, the consensus in footy circles has been that Marcus Bontempelli was going to be a star. Some have suggested that maybe he’d been overrated in that timeframe, but his brilliance cannot be disputed in the previous two seasons. Bont has thrust himself onto the main stage of the AFL and rightly deserves. The statistics back up the sentiment; he ranked first in the league for total inside ’50s, second for metres gained and score involvements, fifth for uncontested possessions and twelfth for contested possessions. So statistically, anecdotally and legitimately, he’s a star in the competition.

From his 22 games in AFLFantasy/DreamTeam, he scored 16 tons, with 50% of those going at 120 or higher. Four times he scored over 130, and he had just three matches all year where he dropped under 80. By the close of the season, he was ranked 14th for total points, and his average of 107.8 ranked him 18th in the game. At first glance, some might not be uber excited by those numbers, but players who owned him or those that bother to look into the data should be genuinely excited by his scoring. During the year, from rounds five to sixteen, he scored eleven consecutive tons, averaged 120 and had the lowest score of 102.

As strong as he was in this format, he’s another level of dominance in SuperCoacah. From the sixteen times he scored 100, twelve of them were above 120, eight over 130 and an insane five that were 145 plus! To go with this near ridiculous level of scoring ceiling is a low variable scoring basement. Just once, he dipped his scoring beneath 80. He wrapped his SuperCoach season as the fifth-best points performer with only Jack Macrae, Jack Steele, Clayton Oliver and Max Gawn scoring more than him. His average of 119.7 is the sixth-best in the game.

This elite season backed up what he’s been doing over the past few seasons but specifically off the covid 2020 season. In AFLFantasy, he posted 3 tons, 2 of these were over 120 in a season-high 145 against the Crows. Additionally, he posted eight more scores over 80. He had just two scores below 80 all year across the whole season. He finished the season on fire as one of the most prolific scorers. He averaged 99 (adjusted average 124) from round 10 to season end.

By the conclusion of 2020, Marcus was yet again among the top-scoring tier of midfielders. He ranked 5th among all mids for both total points and averages. Bont scored 11 tons; 6 were over 120, while a monster 3 went over 160, including his personal best 199. He ended 2020 with eight consecutive tons to average 135 over the season’s final eight matches to top the season off.

The evidence is conclusive and backed by multiple years of data. He’s one of the best uber premium midfielders for SuperCoach, and when you get the timing right in AFLFantasy/DreamTeam, he’s got the capacity to match it with the best of them. Additionally to his scoring is the consistency he holds regarding availability. Bont is one of the most durable players in the game. He hasn’t missed a match in three years and only missed three games in the past six. When you can combine his scoring capacity and availability, it reads for a serious consideration for someone to start within 2022.

What makes Marcus Bontempelli one of the most feared players in the AFL is his ability to be damaging at any position on the ground. At centre bounce, his work is elite and is just as damaging as the first touch clearance midfielder as he is the finesse player delivering it inside fifty for the Dogs. Around the ground, he’s a strong overhead mark, penetrating left foot and, if asked to go forward, is a handful for even the best defenders. Honestly, the only apparent discrepancy is his occasionally wayward set shot at goal, but in reality, it’s nitpicking. He’s nearly impossible to stop, and his poor games are rarer than St Kilda’s premierships.

He’s a stronger SuperCoach candidate than any other format. With averages of 114, 116 & 120, it’s evident that this is the case. He genuinely is a starting squad option as his volume of ceiling scores make him a captaincy option in most games. If he’s not someone you are considering and you play this format, then you’re doing it wrong.

In AFLFantasy/DreamTeam, he’s now shown the ceiling over stretches of games that could make him a legitimate top tier option. But the challenge that does prevent coaches in these formats is the lack of frequency of high possession games. Bont isn’t a stats stuffer type of player. Instead, he’s an impact per possession player. When he gets the ball, he doesn’t waste the ball. Last year he came second in the Brownlow, was dominant all year and still had just nine games where he had thirty possessions or more.

The other challenge to his scoring ceiling in DT and AF is around the midfielder mouths to feed the Bulldogs. They do a pretty good job of sharing the points around. Still, with ball magnets like Jack Macrae, Lachie Hunter, Adam Treloar and even Josh Dunkley in the side, it’s hard to see his possession stat line having a boost to give me confidence he can elevate his game for the season north of 110.

For those looking for a reason in any format to pass early on Bont, then perhaps it could be linked to this midfield merry go round. Last year in the eleven games he played with Josh Dunkley, he averaged 97.2 in AFLFantasy and 118.5 without him. That’s a differential of 21.4. The gap is similar in SuperCoach; with Dunks, he averages 107, without 132.3 and a gap of 25.1 points per game. In isolation, that immediately could be a red flag for coaches. Incredibly if you’re confident of an entire Dunkley season, however, just twelve months earlier, he averaged 14 points per game better in AFLFantasy and 18 in SuperCoach when they played together. So I’m not convinced the deviation is Dunkley dependent.

Instead, it’s a glance into the Bulldogs coaching staff’s challenge when it comes to giving its plethora of elite midfield talent adequate midfield time. In AFLFantasy/DreamTeam he is someone I’d target as an upgrade. There are the ceiling games, but overall I feel comfortable taking him on. While in SuperCoach, he’s a must consider both your initial side and upgrade towards in season.

Each format of the draft games will require a different ranking position for Marcus Bontempelli. In SuperCoach, he’s a solid M1 and will be off the draft board in either the second round or a very late first. AFLFantasy scoring I’d be targetting him at M2 making him a third or early fourth round selection.