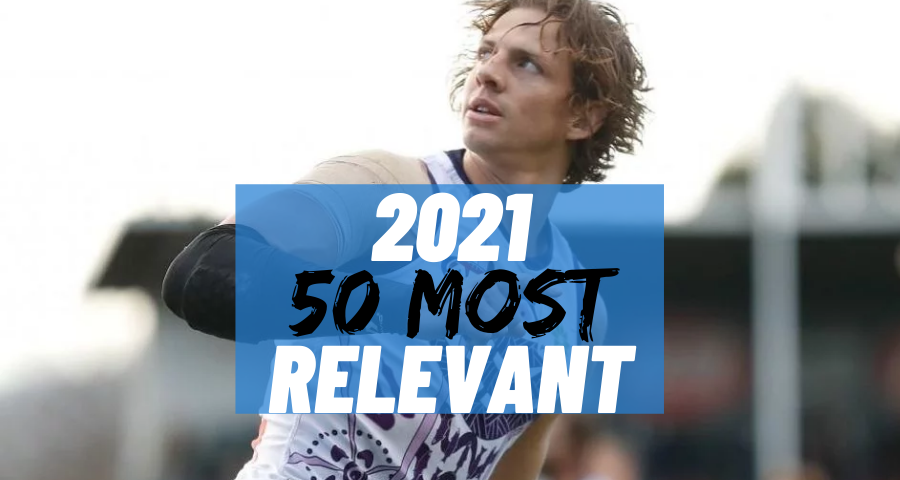 When he’s on the park, Nat Fyfe can be one of the game’s most damaging scorers. The question is, just how many games will he play in 2021?

Without looking at his statistics, If I asked you how you’d rank the season from Nat Fyfe what would you say? Based on the current conversations and starting squad selections I’m seeing across the community many believe he had a poor year.

While he was down on what he’d done previously, it’s hardly a catastrophic fall from grace. Based on averages he still ranked 5th in the AFL for contested possessions, 8th for handballs and 11th for stoppage clearances per game.

From an AFLFantasy perspective, it was a down season from the Fremantle skipper. Six times he scores over 80, an additional four over 70 and just one score sub 50 which was an injury impacted game. A season average of 75 (adjusted 94) is still more than respectable given the challenges the season through at him.

In his primary scoring format of SuperCoach, he put together another prolific season. He ranked 11th for all midfielders based on his average of 113. His year was built off 9 tons with his lowest being 110 and five of them above 130. He had just one score sub 80 & that was when he injured his hammy in the 3rd Q against the Suns.

2020 saw him yet again fall to injury but compared to previous seasons missing just 3 games is hardly a catastrophe. Last years 113 average ensured his third consecutive season in SuperCoach where he’s averaged 110+.

The year prior in 2019 was a strong personal season for the Fremantle captain. He was awarded his third club best and fairest, recognised as captain this year of all Australian side and won his second Brownlow Medal. Individual accolades like this will see him go down in history as an all-time great.

From his 20 games he averaged 30 possesions, 18 of them were contested, went at 70% efficiency, averaged eight clearances a game and five inside ’50s. Across the entire AFL, he ranked third for contested possessions, sixth for clearances and tenth for total disposals.

In AFLFantasy/DreamTeam he was ranked 15th for all midfielders ending the year with an average of 104.9. It featured fourteen scores over the ton, with seven of them over 120. Along with a high frequency of hundreds, he rarely let owners down with a poor score. Just twice throughout the season did he dip below 75.

Despite missing two games in the season, he ranked eighth in SuperCoach for total points of all midfielders and is one of only three available that averaged over 120 last year. In 85% of games last year (17) he scored one hundred or more. Of those 17 tons, 12 of them were over 120, and an insane six were 140 or higher. Across the season he had only three games where he didn’t reach triple figures and ended the season averaging 120.

Just scores wherever he is, whether it be forward or midfield he’s the perfect modern footballer. Like fellow Brownlow Medalists in Dustin Martin and Patrick Dangerfield, he’s equally as dangerous no matter where you play him on the ground.

Was that load management from the Dockers? Or was Freo allowing the kids of Serong, Cerra and Brayshaw the chance to own the midfield? I believe it’s a combination of both.

Much has been made of his growing injury history, and while it’s far from faultless, it’s hardly the disaster some make it out to be. In the past two seasons, he’s missed just five games. Brave coaches could see this perception as a chance to separate your side from the pack.

If you believe he’s destined again in SuperCoach to average 115+ then based on averages that should likely place him inside the top tier of midfielders. One of the key errors coaches can make in calculating injuries to premiums is they failed to project they can use bench cover in the points deficit.

Could you trust your bench for those possible 2-3 weeks he might miss? Could those ’70’ scores cover you for that period of time? Who knows, you may get a Caleb Serong style 100 out of the blue.

Does Fyfe + bench cover outscore that premium that has a better injury history? Remembering that in SuperCoach, Fyfe is a legitimate captaincy option every week.

In round 2 he comes up against the premium destroyer in Matt de Boer. However, the following rounds are enticing. In round 4 he plays Hawthorn (home), Adelaide (away), North (home), West Coast (away), Brisbane (home) & Essendon (away.) Outside of a likely date with Elliot Yeo in round 7 it’s a fairly inviting early run.

Normally, for a player of Nat’s injury history, I’d suggest that ‘if you don’t start with him (or insert any player with injury history) you cannot upgrade to them during the season’. The reason being is with every game played the ‘risk’ of that potential injury occurring only increases with every game played. However, I believe with Nat, it’s different on one caveat.

That is that if the reason you passed on him had nothing to do with his injury resume at all. But rather, you have chosen to initial pass based on a desire to trade him based on fixture analysis and nothing else.

Coaches who play DreamTeam, I believe he’s a pass in that format. A 105 isn’t a strong enough average, and I’m not convinced he can score much higher than that.

In AFLFantasy he’s a chance of gaining MID/FWD DPP should he spend enough time forward. While I’d never pick him in this format without it, having Fyfe as a forward would certainly put him in contention as a top 10 forward option.

In SuperCoach, Fyfe is an M1 but not a first-round selection. This year if you have a late range pick, there is every chance he’ll be available on the turn early in the second. I’d happily select him there as either an M1 or double down on the midfield and make him M2.

In AFLFantasy formats, I think the earliest you’ll have to jump for him is the fourth round. He could drift into the early fourth, but his name value let alone scoring potential would be why he doesn’t slide any further. A good M2 candidate and wouldn’t be the worst M1 if you’d locked away two superstar selections in the defence, forward or ruck line.

Keep an eye on his role, and if he spends enough time forward in UltimateFooty and AFLFantasy he could be awarded DPP. Then he becomes a lock top 6-10 forward.