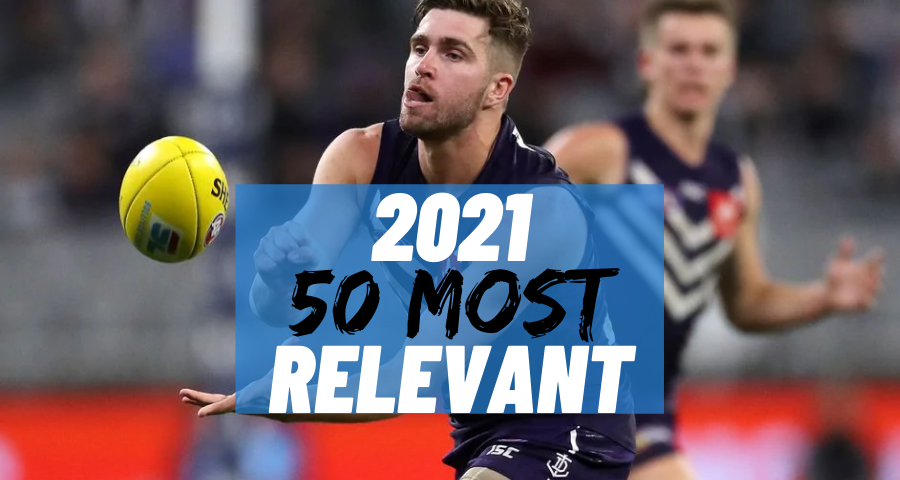 2020 was a breakout season for Luke Ryan. What fantasy footy coaches want to know, is was last year an outlier or the beginning of a new big name premium defender.

When I think of Luke Ryan I think of a 200 game player entering into the twilight of his career. However, the reality is he’s just 24 and hasn’t even played 100 AFL games yet. The reason it feels like he’s so experienced is that ever since he’s entered the league he’s been a consistent and mature presence inside the Dockers backline.

Luke’s always been a reliable scorer and fine intercept defender, but in 2020 he took his game to the elite level. Last year he ranked first in AFL for rebound ’50s, 2nd for intercepts, 9th for kicks, 12th metres gained and 19th for total marks. These aren’t just ‘stats’ this highlights a defender who has multiple scoring columns. Something that all dependable premiums have.

From an AFLFantasy and DreamTeam perspective, he finished the season ranked 10th for points among all defenders and ranked by 18th for averages. Last year he averaged 70 (adjusted 88) scored over 100 once but posted 6 additional scores 80+. Remember in this format last year due to the length of quarters ’80 was the new 100.’

In SuperCoach Ryan was at another level and among the top defenders of the season. He ranked 3rd by averages & 2nd for points among all defenders. He averaged 107 which included 13 tons, 6 of them over 120 and had just 4 scores under 100 (all sub 70) all year.

Overall his season was amazing, but he did have a slow start with just just one score above 80 in the opening four games. However, from his final 13 games, he scored 12 tons. Incredible! For those that purchased him at his lowest of $471,000, they got a huge return on investment.

Luke Ryan has displayed strong fantasy footy scoring tendencies, and at just 24 years of age, coaches should have confidence that he’s just starting to flex at the peak of his powers. Who knows, maybe he’s even got more growth in him.

Where did the scoring improvement come? Between his 2019 and 2020 seasonal averages, he jumped an adjusted 8 points per game in AFLFantasy and 12 in SuperCoach. Interestingly, he had a decrease in tackles & disposals while it was only his disposal efficiency (increase by 4%) and rebound ’50s per game that noticeably improved.

So why the increase? A case could be made that in SuperCoach, it was due to the way the game was scaled. But watching back the games back it’s hardly a mistake. He was a major factor for many of the Dockers effective rebounds and intercepting opposition attempts.

One potential cause for concern is that a few seasons ago the Dockers drafted Hayden Young. He’s a high quality user of the ball by foot and also builds his scoring through intercepts. If Young starts to take away some of Ryan’s kickouts or becomes an option for rebounds, we might see some scoring regression.

Luke Ryan is a genuine point of difference starting squad option in SuperCoach. Despite him sharing the same bye round of Rory Laird, Jake Lloyd and Jack Crisp he’s a viable option to go head to head against them. If your confident he can maintain his scoring, then it’s an option to consider genuinely. In a year when getting a unique premium back in the starting squad is rare, Ryan is a legitimate consideration.

He’s got the potential to push for a top 10 performer in AFLFantasy and DreamTeam, but he’s yet to show the big scoring ceiling in those formats consistently. So for me, I’ll target him as an upgrade.

If you play SuperCoach scoring formats of the game, then Luke Ryan is a genuine D1. He’ll be someone going off draft boards from as early as the overall pick between 15-30. In AFLFantasy scoring, he’ll rightly drift a little later but should be a safe D2 selection.