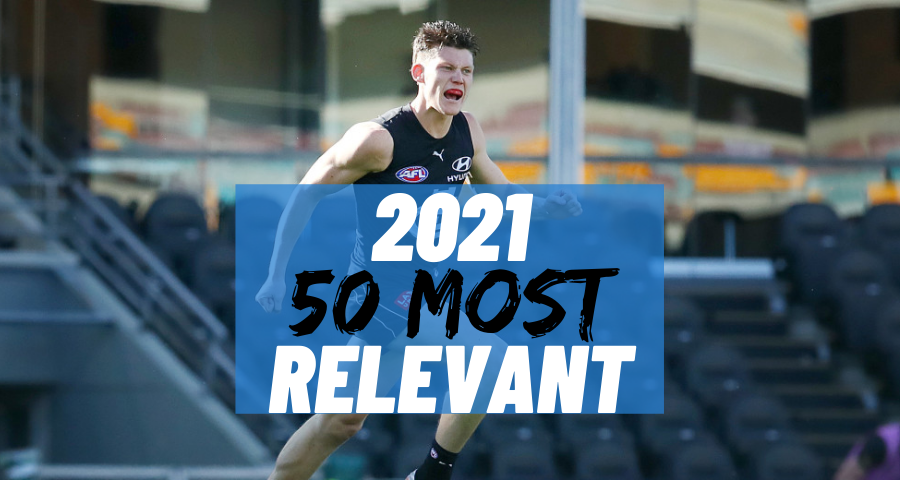 Sam Walsh delivered arguably the great cash cow season ever! Entering into his third season, he’s primed to breakout as a premium midfielder.

From day one of Sam Walsh’s AFL career, he’s displayed why’s he’s been touted as one of the safest 300 game players ever. Walsh is the total package; he’s a tough customer inside stoppages, a strong runner in space, a high footy IQ, and one of the hardest workers both on and off the field.

His debut AFL season is still the greatest ever put together by a first year cash cow. In 2019 he finished the season averaging 93, scored 7 tons, had 9 extra scores over 80 & only dipped his scoring under 70 in just 2 matches.

SuperCoach performances from Sam were equally as impressive as he ended the year averaging 87. It consisted of 6 tons, 8 additional scores above 80 & just three times scored less than 70.

Excitement for his 2020 season was high, with many in the fantasy footy community expecting him to mirror the second year breakouts of Clayton Oliver, Nat Fyfe & Jackson Macrae. The season ended up being a tale of two halves.

Over the first 9 games of the season in AFLFantasy/DreamTeam, he averaged 66.7 (83 Adjusted) with just the three scores above 80. While in SuperCoach he was going at an average of 86 and then included scores of 115 and even a 140.

If you were to contrast his end of season run to last years top performing midfielder in Lachie Neale, it actually looks imposing. Over the final 8 weeks, Neale averaged 122 and 88 (110 adjusted) in AFLFantasy.

If Walsh can maintain this scoring (and role) from the back end of 2020 into this new fantasy footy season, then he’s pushing towards the upper echelon of scoring midfielders this year.

Throw on top of this that he’s still yet to miss a game of footy and all of a sudden this scream third year breakout candidate.

Why did he have the slow scoring start? And what resulted in the strong finish home? It’s a combination of two things. Firstly, Sam Walsh had an adjustment to his midfield role. He started playing more as a wingman in the early part of the season than a true inside midfielder. However, his scoring changed as he moved to a more centre bounce oriented midfielder. A role that on 3AW radio he started last week that is what he’s aiming to hold for the season.

The other reason is Walsh had a clear increase in his time on the ground. Between round 1-9, he averages 81.9%, while the remaining games beyond that he increased this to average 87.4%. It’s no surprise that when you play more of an ‘on the ball’ midfield role and spend more time on the field, your scoring increases.

If these higher time on grounds hold through into the 2021 season and he’s allowed to be more present at centre bounces then I see a world where Walsh can genuinely push the 110 average across all game formats this year. Sam might not be the ‘bull’ that Patrick Cripps is. Neither is he an electric burst player like Zac Williams; he’s just a strong well rounded midfielder.

Because of this, he’s never going to be oppositions team tag target making him a player free of intense midfield scrutiny and likely low basement scoring. I believe the fantasy breakout of Walsh becoming a premium midfielder is only a question of ‘when’ not ‘if.’ If you believe it to be 2021 then you’ll get a nice point of difference premium.

The potential for him in 2021 to be a top 10 averaging and scoring midfielder in AFLFantasy and DreamTeam is quite realistic. However, in SuperCoach, I don’t believe that will happen this season. That because he still tends to turn the ball over more often than I’d prefer.

At his price point, the selection ends to pat dividends in a seasonal average of 100+. He isn’t someone you should be targeting as a value pick, because there isn’t much there. Rather the mindset is he’s a slighter cheaper premium.

It’s a pass right now in SuperCoach, but I’m looking for ways to start him in AFLFantasy and DreamTeam.

His draft range could be very interesting on draft day. By averages, he’s currently ranked 35th in AFLFantasy and 37th in SuperCoach. That places him without improvement as an M3 selection.

Someone could be extra bullish on him and reach early as an m2, but for mine, I’d feel most comfortable with him as an M3.