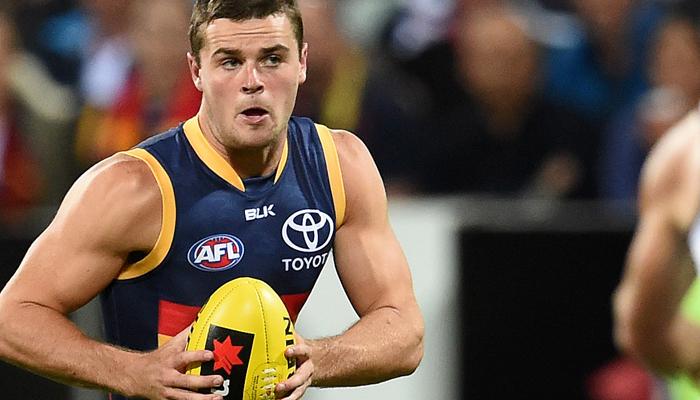 When he plays he delivers premium numbers, but will he play enough games in 2019 to make his selection worth your investment?

2018 never really got going for this Adelaide Crow. Multiple injuries hijacked Brad Crouch’s season. First, it was an abdominal strain that halted his JLT community series plans, however, once over that, a more severe groin injury (some would even say OP) occurred. While he and the club had hoped surgery would not be needed the decision was eventually made in June to get the work necessary for a full run at the 2019 season. Now while he, Crows fans and keeper league coaches were sad not to see him not play a game last year, the upside is that in 2019 we do get a guy who’s proven he can average 100 at a considerably cheaper price tag.

His 2017 season, while it did take a few weeks to get going, reminded the AFL at large of how highly talented a player he is. He averaged a career-high 28 disposals, seven tackles, six clearances and four inside . Crouch also showed off his burst off speed from stoppages gaining an average of 354 meters gained. From just 17 games he ended up ranked second at the club for tackles, third for clearances and contested possessions and fourth for total possessions.

When Crouch plays, he’s a proven fantasy scorer, and the upside for coaches that do choose to take the selection plunge on him means that while he’s on the field, you should be getting premium scores but for a fraction of a price.

Injuries are the theme of his career; last year was the second time in his short career he’s now he’s missed full seasons, the other was 2015. To rub insult to injury his younger brother Matt Crouch was he was drafted two seasons later but has played almost 30 games more than him. Since being age-eligible Brad’s career games tally reads like a Joe Denly BBL08 batting scorecard with his annual games played 14,11,0,14,17 & 0.

The thing with his injuries which have been many and varying is that often ones that occur during the preseason. The positive for coaches this preseason is he’s currently completed everything asked of him and now upon return back to the club from Christmas leave he’ll enter into 100% of the preseason training load. Generally speaking, once he’s got up and going, he hasn’t missed playing of recent years. In 2017 once entering into the side in round 5 he missed just one game with a fractured cheekbone playing a total of 20 games including finals while 2016 he played 12 games straight including finals. Neither of these games stretches is incredibly compelling unless you’re looking for a reason not to select him.

Those that do pick Crouch need to factor in based on the previous history the high likelihood that he will not play 22 games. And while the past gives us an understanding that he and the club are yet to get his body cherry ripe the thing is that history doesn’t always repeat itself with these ‘injury prone’ players. Before the 2018 season, Devon Smith had never played a full season but didn’t miss a game in 2018. The same thing happened to Taylor Adams in 2017, after never played more than 18 games in a year he played all 22 that year. While history shows, 22 games could be unlikely it’s far from a guarantee. We’ve seen plenty of examples of players overcoming history, learning how to manage themselves to play out a full season.

I’ll likely pass in DreamTeam given his price-tag and the strategy I’m looking at. SuperCoach he’s undoubtedly on the watch-list, while in AFLFantasy he’s a likely starter for me as I seek to build my midfield with plenty of value options that could score like premiums.

When looking at building our midfield approximately 25-30 players (depending on the format you play) come with a 100 average or higher. Likely these players (league size dependent) will all be gone within the first four if not five rounds. From that point on coaches will start looking for midfielders who’ll likely go 100+ and this is where Crouch will begin to be considered.

Every league is different, some he may slide outside the first ten rounds and be as low as an M5, while others will be extra bullish on him and pick him up as M3 and drafted inside the top 6 rounds. Given all the factors I’d be happy drafting him at M4.