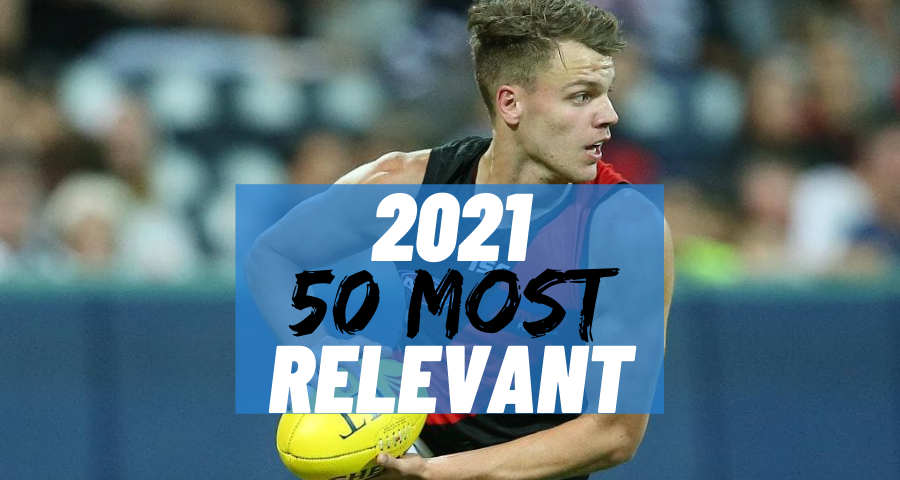 Jordan Ridley was one of the best breakout performers in 2020 across all formats. Heading into a new season, the question fantasy coaches wonder is he can he do it again?

Twelve months ago Jordan Ridley wasn’t locked into the Essendon Football clubs best 22. But by the end of the season, he’s the clubs best & fairest winner.

Last season he averaged 18 disposals 6 marks, 4 rebound 50’s and went at an elite 87 disposal efficiency. He ranked 2nd for effective disposals per game across the league, 6th for total marks per game and ranked 16th for total rebound ’50s.

His SuperCoach season saw a total increased of 35 points per game from his 2019 average. During the 2020 season, he averaged 101, had ten scores over 100, four over 120 and dipped below 70 in just one game. He ended the season ranked fifth for total points and seventh by the average for all defenders.

For DreamTeam/AFLFantasy he averaged 72 (adjusted 89) it included just the one ton and had nine scores 70+, In the shortened quarter and no weighting that’s a solid return. In adjusted scoring terms, those ’70s are high 80’s-90’s. He ended the season ranked thirteenth by averages and seventh for total points in comparisons to his fellow defenders.

Ridley was a picture of consistency for the majority of the season. However, he still has some room for growth, and ‘full length’ games might assist in that. In 5 games last season he took under 5 marks per game, and in only two matches, he took more than 10. For a player of his aerial supremacy, the Bombers will be hoping for an increase to 7-8 marks a game on average.

Furthermore, Jordan had just 4 games with 20+ possessions. While it’s rare for a ‘tall’ back to have the ball that much, he’s now efficient ball user in the Essendon defensive unit with Adam Saad and Connor McKenna no longer at the club.

It’s rare for big men to take the kick in duties, but as Aiden Corr showed at GWS, it’s not impossible. If that happens, Ridley could genuinely push the top tier backs of each format.

You can rarely see the potential for scoring improvement in a player after delivering premium numbers like his 2020 season. However, with Jordan Ridley, it’s a fairly easy ‘sell’.

As you might recall, towards the back end of last season Ridley started to be a questionable selection weekly. Late in the loss against GWS in round 10 he took a big late hit from Tim Taranto that injured his shoulder. From then on he became a ‘wait and see’ selection in most matches.

It’s no surprise that his lowest scores in the season came beyond this injury with four of his lowest scores coming in these final seven weeks for SuperCoach. While in AFLFantasy/DreamTeam it was just one score above 70 in the final five.

Jordan Ridley’s scoring success is linked to health and games of Michael Hurley. With Hurley holding down a key defensive pillar, it allows Jordan to play the intercepting role and not have to think 100% defensively.

Opposition teams may force him to be more accountable and use his direct opponent to create a damaging field position. While I believe this is the case, I think the Dons can still force a way to free him up.

A combination of key talls in Hurley, Cale Hooker, Brandon Zerk-Thatcher plus new draftees Nikolas Cox and Zach Reid can all be used to be more ‘accountable.’ Over the years the Eagles have done this well for Jeremy McGovern and Essendon will be hoping to replicate this.

Jordan Ridley has gone from a fringe player to arguably the clubs most important player for the long term in the space of one AFL season. At 22 years old, he’s still got plenty of improvement left in him

Fantasy footy coaches might choose to overlook him in starting squads, with many choosing the ‘The L’s in defense of Lloyd, Laird and Lachie (Whitfield). Sprinkle in some value defenders and all of a sudden it’s hard to squeeze a Ridley in.

If you opt to not start with him, I think he needs to be firmly in your upgrade plans. With a bye round at round 13, he provides a strong upgrade target, potentially directly from an underpriced Wayne Milera who takes a rest in round 14.

In SuperCoach and AFLFantasy he’s battling it out at D3 for me, in DreamTeam he’s right in the mix for an in season upgrade.

Each format requires a different draft ranking. In SuperCoach he’s a clear D1 and is currently ranked 7th based on last seasons averages. I expect that ranking range to hold in 2021.