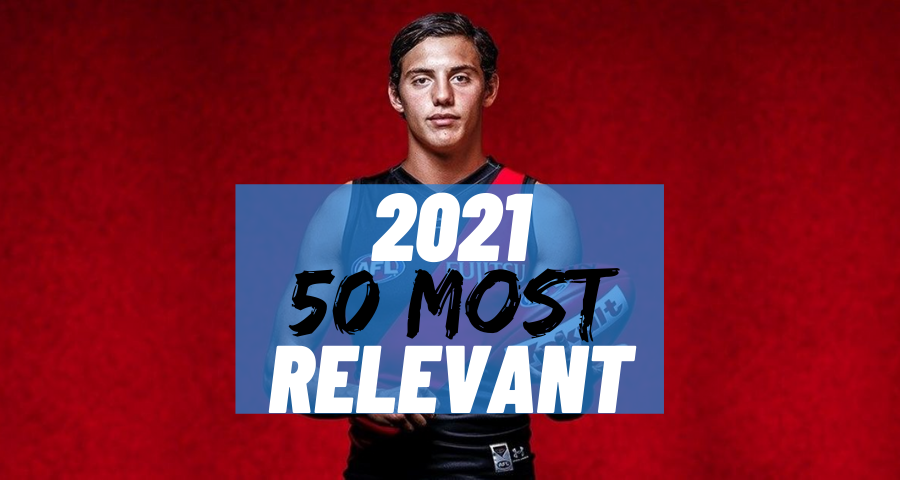 The talented former first round pick Jye Caldwell has made a move desperate for midfield opportunities. Thankfully for him and fantasy footy coaches he’s come to the right club.

Ever since Jobe Watson’s retirement, the Essendon Football Club has had a large vacancy inside their midfield unit. Ask any Bombers fan, and they’ll tell you they lack an inside bull, someone capable of being that first touch and inside ball winning midfielder.

It’s why the club identified but ultimately failed in securing Josh Dunkley. The club is utterly aware of the need to fill this role. It’s what has fantasy coaches frothing at the prospect of what this means for Jye Caldwell. With no Dunkley, the responsibilities on Caldwell should only further increase.

As a junior, he was renowned as a physical, big bodied midfielder with clean hands and a special burst of speed from the contest that reminded recruiters of GWS Giants skipper Stephen Coniglio.

After being selected at pick ten in the 2018 AFL draft, Jye played eleven games over two seasons at GWS. Breaking into that midfield unit has been near impossible for multiple years, and ultimately it was a primary reason both he and Jackson Hately moved on from the club.

In his AFL debut back in 2019, we saw glimpses of his scoring potential. Even without getting much midfield opportunities he won 13 possesions, took five marks, had six tackles and finished the game with 72 AFLFantasy and 73 SuperCoach points.

Last year he played nine games and delivered three scores over 70 in SuperCoach and two in AFLFantasy. Again these aren’t stunning numbers, but in shortened games and limited midfield minutes, it shows potential. Remembering that he’s now at a team who need his skill set in the midfield.

A few days ago we spoke about Tom Phillips, a career midfielder who due to being played out of position has picked up MID/FWD DPP. Similarly, Jye is also available as a MID/FWD and now presents as a genuine forward breakout candidate.

One of the reasons for he played so few games at the Giants was also due to the club being ultra conservative with his body. Through his final season in under 18’s he played three games for TAC Cup club Bendigo Pioneers, one for Vic Country and a handful for school side.

For years he’d struggled with a variety of soft tissue injuries. However, last year after the club’s cautious approach, he’d finally got the confidence to be able to play regularly.

The Bombers will now reap this approach’s rewards with him entering his third season in the AFL system he looks primed to deliver on his potential.

The planets all seem to be aligning for Jye Caldwell to breakout as a fantasy footballer this season. He’s forward eligible, coming into his third season in the AFL system and he’s moved to a club with a vacancy in his preferred inside midfield role.

However, this is all projected positive outcome. and as yet he’s not a proven commodity. Even in his junior days, he doesn’t have the resume of high SuperCoach & AFLFantasy scoring. Part of that can be put down to continual injuries but that further muddies the waters for those wanting to select him.

Caldwell clearly has the potential to push the level required of being a premium forward. But this season we are not short on either value options or top tier scoring forwards. Can you afford to take the risk this year on a player who as yet has only shown glimpses?

Last season some coaches were hesitant to pick Andrew Brayshaw for similar reasons. He was a former high draft pick who had spent a few seasons in the league developing his craft with little midfield minutes.

However, in 2020 as a MID/FWD option, everything went right, and he delivered big numbers. He finished the year ranked 4th for averages and points among all forwards in AFLFantasy/DreamTeam and 5th for points and averages in SuperCoach.

Just because it happened with Brayshaw, it’s no certainty for Caldwell. But it does give coaches hope that third year breakouts can deliver some high rewards.

For fantasy coaches looking for a breakout candidate in the forward line, then Jye Caldwell needs to be on your watchlist. The key to him scoring well will ultimately determine how many midfield minutes a game he can acquire.

We’ve been hoping largely in vain for years that Darcy Parish could pick up a full time midfield role. Hopefully, for both Darcy and Jye under a new coach, this eventuates.

The preseason hype level in salary cap formats will ultimately determine just how early he goes in certain leagues. In some leagues, you’ll have an overly zealous ( and likely Essendon supporter) in that league that will draft him at F2. For me, that’s too early. He’s much more like to be an F3 selection, but personally, I’d feel most comfortable drafting him at F4.

If you want him, you’ll need to reach to get your man, so an F3 draft position is likely what it will cost because I can’t see him lasting into the early teen rounds on draft day in too many leagues.