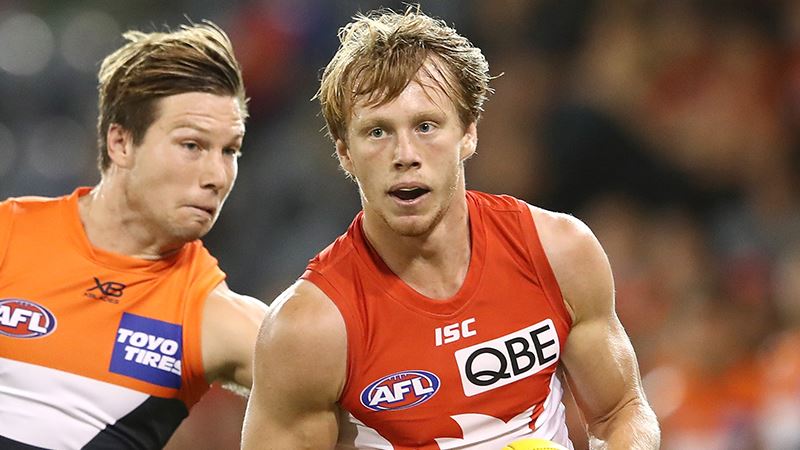 The time is now for Callum Mills to establish himself as a young star of the game. The good news for him, the Swans and fantasy footy coaches is he has been presented with the opportunity.

As a junior Callum Mills was a dominant midfielder and he’d often use his big-bodied frame to win the ball and dominate games. In 2014 as a bottom age player he gathered 40 disposals in a NEAFL game for the Swans reserves team not bad for a 17-year-old. Many talent scouts in his draft year (2015) believed Mills was the complete midfielder in the draft and were it not for injuries would’ve been widely viewed as the best player in the draft pool.

In his debut season, he was one of the best cash cows for fantasy coaches, and he went on to win the Rising Star award. That year of 2016 he averaged 72 AFLFantasy/DreamTeam points from 22 games and 77 in SuperCoach, not bad for a guy that was used almost exclusively off half-back in a role he’d never played before as a junior.

What excited fantasy coaches for the long-term were his final nine games of the year. In AFLFantasy/DreamTeam he averaged 85.4 and didn’t score below 73 while in SuperCoach during this stretch of 9 games he averaged 87.5 and had the lowest score of 74 while hitting the hundred mark twice.

His 2017 season showed some further skill and competence development and while his averages did take a dip, one of the factors was a game he was KO’d early in the opening term by Tom Bugg and failed to register a score in SuperCoach while AFLFantasy/DreamTeam owners would’ve enjoyed his 1 point from that game. 2018 started well enough with 2 of his opening three games with 90+ scores across all formats. However, an injury where Mills broke his foot in an accident after training before round 10 ended his season.

While the stats don’t indicate a huge fantasy breakout is on the cards, the fact is that with the departure of Dan Hannebery and the need to add some new dynamics to the Swans midfield, I can see Mills being released to play as an influential midfielder this year. He’s already declared his hand is saying his wish is to move there permanently and going by the few midfield rotations he was given last year he’s shown he’s more than ready to take the mantle along with Isaac Heeney and Luke Parker in the Swans new midfield era.

Here’s the thing, while he’s produced nothing of spectacular fantasy note thus far he’s done all his scoring off the halfback, in a position while very competent is not his natural environment. The Swans 2018 season while still managing to make finals started to show some midfield cracks in what had been for years the side’s strength. If Sydney is to go again and have a crack at finals in 2019 and beyond, I believe it’ll be the inclusions of young stars like Mills into the midfield that will aid this.

In my opinion, they won’t get back to the top of the tree on the back of the current midfield group, something new needs to be done and Callum Mills has fine-tuned areas of his game that needed work on for him to be the complete midfielder at AFL level. The time for Mills to enter into the Sydney side as an out and out midfielder is now. While Isaac Heeney is part of the long-term midfield of the Swans, I still believe his presence is still needed heavily inside forward 50 for the Swans to be less Lance Franklin dependant. The significant midfield change the Swans need to make is Mills into the guts.

At his price, he doesn’t offer a large amount of price growth in him, and so if you are selecting him, it’d be because you believe he can stretch his way upwards towards the top 10 averaging defenders which I think could happen if he’s released into the midfield.

Mills is very much a gut call that I’m bullish on and makes the 50 most relevant because if he does transition into a substantial gain of midfield minutes I can see a comfortable 15 points per game increase if not more, especially with growth in the tackles and disposals columns as he’d be around the ball considerably more.

Until we see it declared in the preseason by coach John Longmire of a permanent move and then played out in some of the 2 JLT matches, then fantasy coaches can have nothing more than have him placed on a watch list as a potential breakout defender.

Depending on when you hold your draft and also if the scenarios happen that I mention above do take place where he goes in the draft will be of huge variation. He’s currently ranked within the range of around the 40th defender depending on the format you play, however, his return on investment could see him be anywhere from a small boost to pushing inside the top 30 if he retains his half back role right up to a top 10 if he’s given the midfield role.

If you were to draft him in the place of a D3, you’d be content that either way, you’ll get either a consistently performing defender or a potential D2 breakout. Drafting him as a D2 means your either jumping just marginally too early on him, or you’ve gone for a strategy that sees you go harder in either the midfield or forward lines and lighter on down back.