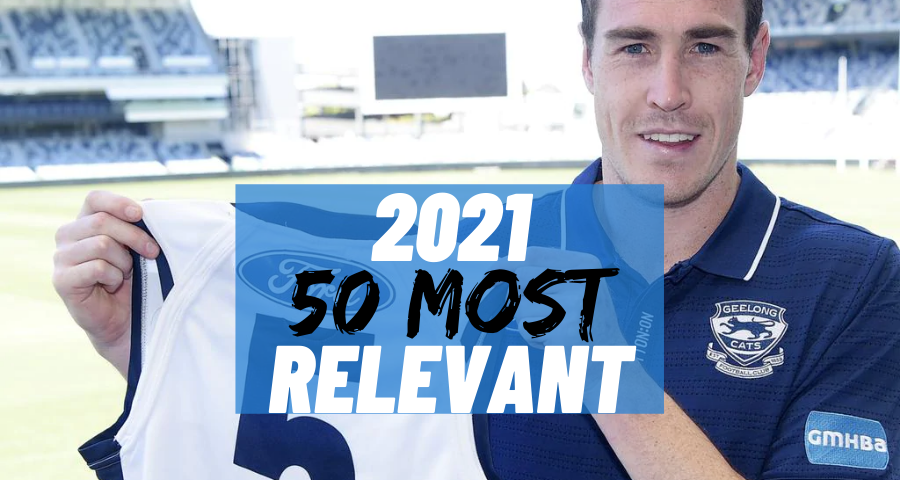 Jeremy Cameron was the highest profile player movement during the most recent AFL trade period. After a poor 2019 can he bounce back in 2020?

For the second time in as many seasons, the team that loses the Grand Final to Richmond has a poor following year. This was both as a club, but certainly from a fantasy football output from Jeremy Cameron.

In 2020 Jezza had a scoring dip of 20 points per game in SuperCoach and an AFLFantasy adjusted average of almost 25 points per game. The positive for coaches that are considering him in 2021 is that he’s got instant value if he can return to his scoring best of 2019. Additionally, if he can return those numbers, he’d put himself right in the conversation as a year end keeper.

During his Coleman Medal winning and All-Austalian season of 2019 Jeremy Cameron was a dominant force. He kicked 67 goals and was clearly the most dominant tall forward in the game.

From an AFLDreamTeam/AFLFantasy perspective, he finished the season ranked as the 9th best forward by averages posting an 87.5 He also ranked 8th for total points ranked well ahead of popular premiums Christian Petracca and Toby Greene. That season he scored six tons, including a 147 against Richmond in round three and a final round 154 against Gold Coast.

For SuperCoach he went even better ranking 8th in that format for both total points and average for all forwards. He wrapped up the season with an average of 92.8 and scored eight times over 100 including four over 130 including a personal best 163.

2019 was far from a one-season outlier. A look into his 2017 numbers showcases his fantasy football ability. Despite missing four games in AFLFantasy/DreamTeam, he averaged 88.2 while in SuperCoach he averaged 89. Across both formats, he ranked top 15 for averages for forwards.

Coming to Geelong via a trade, the benefits should further increase on his fantasy output. Geelong is one of the most prolific scoring fantasy footy teams of last few years. The predominant reason for this is the Cats heavy possession retention game style.

Geelong love to hold onto the ball and choose to play a ‘mark and kick’ style of play. This should benefit Cameron, who is an elite field kick and also has a strong starting burst of speed to create separation from his opponents.

It really is a perfect combination. A proven fantasy scorer, is approximately 20 points below his scoring ability and he’s moved to a fantasy footy friendly team. Whether he had been on your watchlist before today that fact is all coaches need to consider Jeremy Cameron.

The arrival of Jeremy Cameron further signalled the Geelong Football clubs intent to be a premiership contender yet again in 2021. Much has been made already in the public eye about his poor 2020 season, but you cannot deny his match winning ability.

The big question football fans, let alone fantasy coaches want answers on is ‘can the twin towers of Hawkins and Cameron work together? Old school players will be remember fondly that when Brisbane had Daniel Bradshaw and Jonathan Brown they both found a way to score, especially the latter.

However, in the modern era, the closest contrast we have is Tom Lynch and Jack Riewoldt at Richmond. To look at just the 2019 season and contrast it to previous years is dangerous. That year Lynch didn’t have a preseason and spent the early part of the year finding his feet. At the same time, Jack was in & out of the side with multiple injuries.

If we look at 2019-2020, we see games, where both players have dominated games, but have as a whole, failed to replicate their fantasy scoring dominance from previous years. Will that be the same for a Hawkins/Cameron combination? Possibly, but it is something coaches will need to factor into his selection.

The positives of his arrival for Geelong are numerous. Firstly, both players game styles do complement each other. Tomahawk is at his most dangerous within 60 metres from goal. He can win the ball on the lead, and the Cats can dump the ball on his head knowing he’ll win most one on ones.

Jezza can play deep forward, but he’s at his best more as the mobile tall capable of getting up and around the ground as well as being an inside 50 threat. His strong overhead marking and elite field passing make him a prime target for Geelong’s possession happy game style.

His inclusion into the Geelong forward line means there will be weeks where either he or Tom Hawkins get the opposition sides second best tall defender. Where for the majority of their careers, both have been the #1 tall target. I expect Geelong to adjust strategy and targets mid-game to adapt to these matchups and exploit them.

The 2021 fantasy footy God’s have given us a plethora of the top tier forwards to consider. Whatever we lost from last season in Jy Simpkin, Andrew Brayshaw and Lachie Whitfield we’ve had them replaced with Patrick Dangerfield, Steele Sidebottom and Rowan Marshall.

We’ve got a bumper crop of top tier forwards, but we can’t start them all, and a player like Jeremy Cameron could well be a perfect stepping stone. He’s 15-20 points of value, and if he gets off to a flyer, he’s gonna make money and bank points quickly.

Geelong’s opening 6 opponents are: Crows, Lions, Hawks, Dees, North and Eagles. Certainly not an easy ride, but Cameron has shown over his career he can make even the most talented of defender look second rate.

He’s not currently in any of my personal preseason teams currently, but in DreamTeam & SuperCoach if you need a value price stepping stone or are convinced he’s going back to his 2019 days then he’s one to keep on the watchlist. Given the top tier forwards we have, if you hope to keep him, he’s gonna need to replicate that season to get close to being a ‘keeper’.

In AFLFantasy he does present value at under $500K. The benefit of his price is if he pops, your making money fast. If he slumps, you can pivot to the breakout player around his price that does.

Like many players throughout the 50 most relevant, his draft range will be format dependant. In SuperCoach, where he has arguably the higher scoring potential and as such is worth reaching for a round or two earlier if required. If Cameron is still available on the board when I’m looking to select my F3, then he should be right in the mix of selection.

In AFLFantasy scoring leagues, there’s a high likelihood the Cameron will slide in contrast to whee’s he’s previously gone. Last year in UltimateFooty his average draft position was 72 (approx. seventh round). This year he’ll slide well past that and should still be available in the 11th-13th round. If you could land Jez as an F4, he was the potential to push for an F2 or maybe even a low ranked F1.

In keeper leagues, he’s likely to not make many people’s ‘keeper’ list and as such, be a worthy redraft option.