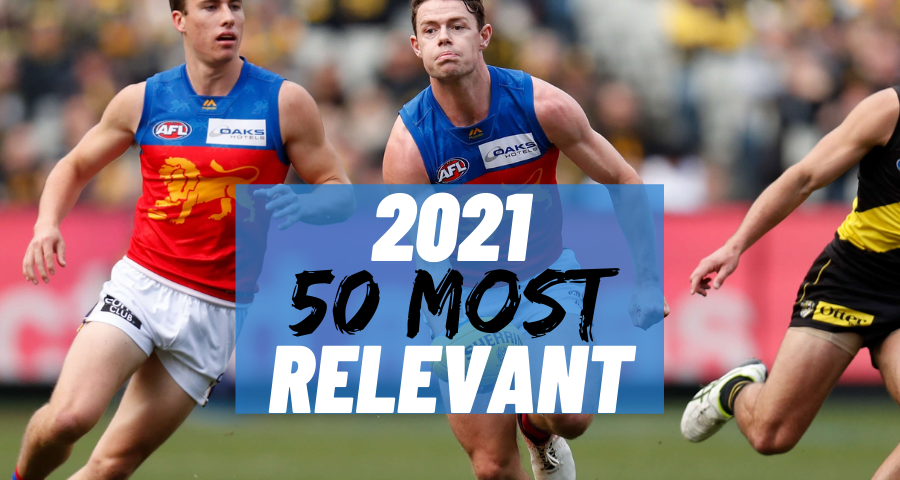 It was a perfect season for Lachie Neale and his Brisbane Lions outside of making the Grand Final. After winning a Brownlow Medal and claiming the #1 fantasy scoring mantle, coaches hope he can back it up in 2021?

You don’t win a Brownlow Medal without having a phenomenal season, and in 2020 it was a blinder of a year from Lachie Neale. He averaged 27 possessions, 6 score involvements, 5 clearances, 5 inside ’50s, 4 marks and 3. tackles per game.

Across the league, he ranked first for contested possessions, disposals, effective disposals, second for clearances, third for stoppage clearances and inside ’50s and fifth for total score involvements.

From an AFLFantasy/DreamTeam perspective, he was simply elite. He ended the season 107 points clear of second place (Clayton Oliver) for total points. He averaged 98 (adjusted 122.5) and scored 10 tons, 3 of them over 120 and an additional 4 further scores between 80-99. No other player in these formats scored as many pure 100’s as Neale in 2020.

Lachie Neale’s SuperCoach season was even more potent. His career high average of 134 resulted in him being one of only two players (Max Gawn) that averaged over 123. From total points perceptive he was the clear leader, with Jack Steele in second place who was 202 behind him.

These numbers are elite, as he scored 14 tons and 10 of them were over 140. Speaking of tons, his lowest across the season was 113. All year, he only failed to reach triple figures in just three games. What’s encouraging for owners considering selecting him this year, is that sine being a Lion he’s shown some elite scoring tendencies.

Just the season prior in 2019 in AFLFantasy/DreamTeam he finished the season with an average of 105 It featured 11 scores over 100 and five scores over 130. Playing 22 games ensured he finished 12th for total points and was 14th for all midfielders in terms of averages.

He was even stronger in SuperCoach. An average of 121 featured 17 scores over 100. Of those seventeen tons, ten were over 120, and a massive seven over 140. Make no mistake about it, in this format of the game he’s a good captaincy option. Neale finished the season ranked fourth for total points scored and averages. He’s also the second-highest ranked midfielder behind Jackson Macrae who scored only 42 more points in 2019.

Neale also holds one of the best durability records of all midfield premiums. Having missed only two games in the previous seven years coaches selecting him will be confident that he is consistent and low-risk selection.

When a player has a significant scoring season, the immediate questions we need to ask is: Can Lachie Neale do it again? And what caused the scoring bump? Let’s deal with these one at a time.

He certainly can do it again! Over his time at Brisbane and even a few years prior at Fremantle, he’s displayed a ceiling frequency that takes coaches back to the ‘good old days’ of weekly monster scores from Tom Rockliff, Gary Ablett or Dane Swan.

Last seasons shorter quarters benefited some players and hurt others. Someone like aerobic beast Andrew Gaff saw a scoring a marginal scoring dip due to not being able to overwork opponents as game fatigue set in. While those who are more impactful and burst players, especially in SuperCoach got a more healthy weighting.

Neale’s time on the ground last year was next level, he played 92% of game time on the ground. This was up 3% from the season prior. Across the AFL, he was one of only two players inside the top 30 players for most time on the ground that I wouldn’t classify as a tall. Yes, he’s a strong runner, but I don’t see how he maintains this percentage time on the ground with the returning to full length games. As a result, at least in DreamTeam and AFLFantasy, I project his scoring to slide to some degree.

Out of the 3 salary cap formats his scoring historically lends him to being a better SuperCoach performer. And it’s in that format you’d arguably feel the most nervous taking him on early.

If you bet against Neale and not start him, either in the desire for value or on the premise, you believe he’ll drop in value. What do you do if he storms out of the gate in 2021 like he has done the past few seasons at Brisbane?

Given what he’s done in the previous 2 seasons I’d be comfortable for someone to ‘pay up’ for him in SuperCoach. Even with some regression, he still looks a likely 120+ midfielder. You want to own those players for as long as possible. I have some hesitation around starting him in the other formats, so personally, I’d pursue him more as an upgrade option.

Historically, the top scoring player from the previous year is almost exclusively a certain first overall pick ion draft day. However, in 2021 that seems not to be the case. Lachie Neale is still a clear first round pick, but many will be tempted to lock away a top tier ruck, defender or forward instead.