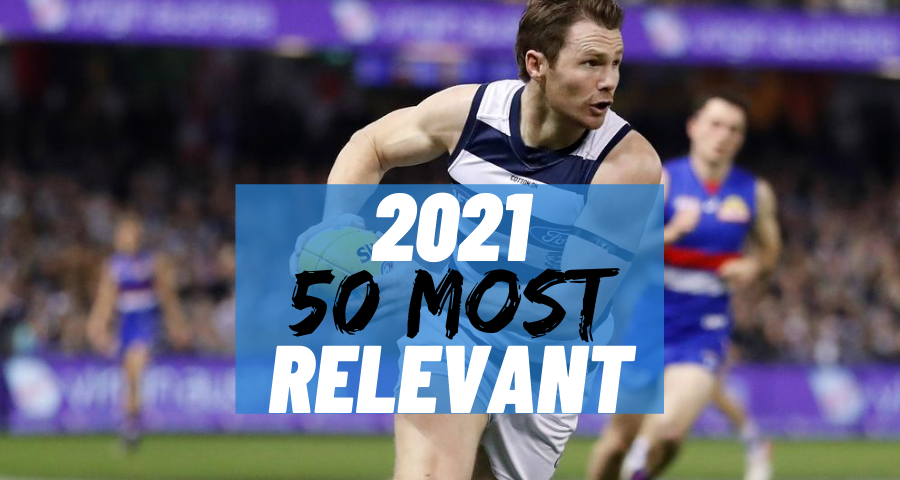 For years Patrick Dangerfield has been a prominent feature of our fantasy football sides. With him now available to be picked in our forward lines it feels like an easy selection. But is he someone you can start with?

For almost a decade Patrick Dangerfield has been a staple in our fantasy footy sides. Not only has he been a top performing player, but he’s also one of the most enjoyable to own. Last year was no different, and he was one of the key reasons his Geelong Cats made it to the big dance.

In 200 he ranked first in the AFL for total goal assists, inside ’50s, ranked second for total contested possessions, meters gains and ranked third for total centre clearances.

From an AFLFantasy/DreamTeam perspective, his seasonal average of 81.7 converted to an adjusted average of 102. It’s perfectly serviceable as a MID only, but now as a MID/FWD his relevance has skyrocketed. He ended the year with 3 tons, an additional 4 scores between 90-99 and 3 above 80. In short 10 of 17 games were the equivalent of a ton in 2020 due to the shorter quarters.

In his more preferred scoring format of SuperCoach, he posted 12 tons, 5 of these were above 130. On his way to his seasonal average of 113.8, he had just 2 scores all season that fell below 83. As someone who is a MID/FWD, these are incredibly consistent scores.

For AFLFantasy/DreamTeam in 2019, he averaged 107. It featured fourteen scores over 100, six of those he converted into 120+ score including a final round 150 Vs Carlton. Based on the 2019 data, he’s ranked tenth by averages amongst all midfielders but finished last year inside the top 13 for total points scored.

In SuperCoach his averaged 115. From 21 games he scored 13 times over 100, 8 of those were insanely huge as he went over 140. For available midfielders, he was ranked sixth for total points and eighth for averages.

Often Patrick is criticised for being ‘too dramatic’ when it comes to in-game niggles. While for some (cough Kane Cornes cough) it dints his reputation. One thing that is true though, even though he has a crash and bang style of football, he’s been incredibly durable over his career. In just the past six seasons he’s missed only four games.

One of my greatest disappointments of last years AFL grand final was not seeing Patrick Dangerfield fulfil his potential and dominate the game. Just moments after the Cats loss, news started to filter through Danger battling a severe groin injury.

This injury is still lingering. The former Brownlow medalist is still yet to participate in full training and now has serious question marks over his availability for the AAMI community series clash and round one.

Even for the most devoted Dangerfield owner, that needs to put some level of doubt about whether or not he’s a starting squad option should be named round one. Ultimately, with anyone carrying some injury concerns through the preseason, we need to ask ourselves ‘what do they need to do in the pre-round one for me to select them?’ Without this, you’ll either find yourself seduced by a name, or go with the flow (right or wrongly) of what the popular ‘group think’ of the fantasy community is.

For me to start Patrick, I need to see him do two things. First, play in the AAMI community series / intra club match. Second, display that explosive ability from a contest/stoppage that he’s renowned for. Without this, even if name round one I’ll be targeting him as an early upgrade.

The risk in that is he’s one of a handful of players who have the capacity to take a season away from you with a strong scoring run to start the season. And for Danger, he’s got the fixture to do it. The Cats years kicks off against last seasons easiest team to score against in Adelaide. The following 7 weeks he plays, Brisbane (home), Hawthorn, Melbourne, North Melbourne (home), West Coast (home), Sydney and Richmond.

It does include some difficult matches, but the Cats should dominate early beyond the Brisbane and Richmond clash. They play 3 rebuilding clubs in the Crows, Hawks and Kangaroos and none of these teams possesses a recognised tagger capable of slowing him down.

During the offseason, the Cats clearly went ‘all in’ on the current list in a tilt for a premiership. The largest name being that of Jeremy Cameron. However, Isaac Smith and Shaun Higgins are no scrubs. These three big in’s allow further flexibility in game for the Geelong coaching staff and give them options to use Patrick.

I believe it’ll still be a split role of midfield and forward, but with the additional marking target up forward it’ll no longer be some forced necessity to play him as a forward. Instead, it’ll be a luxury and an opportunity to expose the opposition.

By the time round 23 comes around, you’ll want Patrick in your team. He isn’t an ‘if’ but a ‘when’ to target to have in your side. Even a 3/4 strength Danger in your team is still considerably better that the vast majority of our forward stocks.

Once the position allocations were revealed, Patrick Dangerfield was locked in many coaches eyes as a first round selection. Ordinarily, I’d agree, but given the question marks around his availability for round one, I’d be hesitant to pick anyone in the opening round that has question marks on them.

For that reason, he’s an early-mid second round selection, but still a clear F1 for whoever owns him.