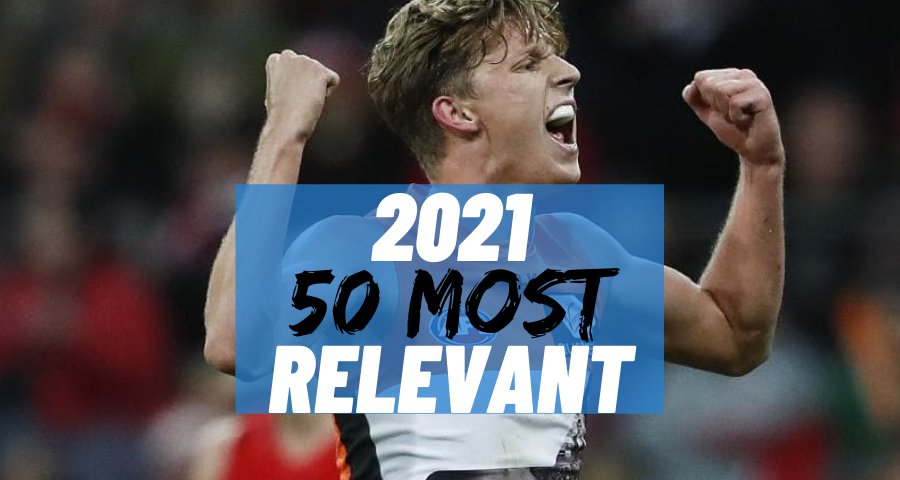 Last year, I had Lachie Whitfield as my #1 most relevant player on the list last year. So why the dip down to #4? Allow me to explain.

Over the past three seasons, Lachie Whitfield has been available as a midfielder, defender & forward. With a role switch back again to the defensive line, we once again have the sublimely skilful player as a defender in 2021.

Despite a concussion affected game in round three against the Western Bulldogs, he played every one of the 17 games. This is the first time he hasn’t missed a game since his suspension shortened 2017 year. Last year he ranked 6th for total uncontested possessions, 9th for marks, 15th for effective disposals and 20th for total disposals. Like his fantasy scores, these numbers would’ve been even higher had it not been for the st quarter concussion.

From an AFLFantasy/DreamTeam perspective, he averaged 85.8 (107 adjusted) which included 6 pure tons and an additional 5 scores between 80-99.

In SuperCoach he averaged 104, which included 10 tons, 5 of these were over 120 and just the one under 83. Not surprisingly, this game was his concussion affected game

Rarely does a top-line premium offer some value on their starting price, but Whitfield does. Removing that early concussion affected game where he took the hit in the opening minutes he would have averaged 90 (113 adjusted) in AFLFantasy and 110 in SuperCoach. The 10 games following show that he’s much closer to these averages. Between 4-14, he averaged 96 AFLFantasy (120 adjusted) and 114 in SuperCoach. These scores also reflect his numbers from the year prior.

His 2019 season in SuperCoach Lachie finished the season with an average of 111.2 which had just the three scores below 90 all year, with one of them an injury-affected score. From his 16 games, he scored 11 tons with five over 120 and three over 150 including a personal best 170 against the Blues.

One thing that cannot be questioned beyond his evident fantasy footy chops is the athletic capacity. A combination of that and his high footy IQ mean that Whitfield often knows where to position himself and get the ball in open space. From there he uses his elite kicking skills to set up a Giants forward assault. The return to full-length quarters can only be a good thing for endurance athletes like him.

Another potential upside for him is the opening up of kick in duties. The departure of Aiden Corr to North Melbourne, Zac Williams to Carlton, and Heath Shaw’s retirement leaves an additional scoring option. Especially given, all three would be known to take a fair slice of opportunities.

Yes, the Giants have Lachie Ash, but he’s more a run and carry player. While I’d be shocked to see a Harry Perryman or even Isaac Cumming get opportunities ahead of him! Why? Because of the change in the kick-ins. The mark will now be set at 15 metres from the centre of the kick-off line towards the centre of the ground at kick-ins. This was previously set at 10 metres.  A player of Lachie’s foot skills and running capacity will thrive in this space and should be the clubs first choice for every kick-in. If he holds these down, a natural scoring boost will follow.

Nobody will question Lachie Whitfield’s scoring potential. He’s even a ‘value’ premium, due to that concussion affected game. However, one of the very few reasons people might have a sour taste in their mouth regarding Whitfield is around the number of injuries he suffered during 2019. From an injury to his thigh, appendicitis to requiring surgery on his collarbone we saw Lachie miss multiple games through injury.

‘Four unrelated injuries in 18 months might be enough to put a line through him in some eyes, but before that, he’s been a profoundly reliable performer. In 2018 he played every game, while in 2017 he missed the opening few months of the season due to a drug ban. Indeed, the past 12 months have presented challenges, but in the broader context, I’d suggest he’s been more unlikely with different unrelated injuries rather than an injury ‘prone’ player.

The bizarre mix of injuries continued in the preseason when GWS confirmed that Lachie suffered a bruised liver somehow in training. The positive is he has participated already in a large portion of the preseason and can still be involved in the aerobic work. But given the uncertainty of his return, can we select him in our starting squads with confidence?

Ultimately, that’s a matter of personal perspective. Some have a policy that if a player is injured at all in the preseason, they rule them out completely. If that’s the case, place a line through him if that’s you.

Others see a cumulative build of injuries over time and decide to avoid any potential midseason issue by steering clear of him entirely. For some, they instead take the ‘risk’ of him missing games but bank his elite scoring for however many games he may provide us with. For what it’s worth, last year he did play every season ;).

In my opinion, he’s one of only 2 players (Rory Laird the other) who I think can compete with Jake Lloyd. It’s why for me, he’s inside the top 5. A fit and firing Lachie is not someone I want to go against all season. He’s got the ceiling and history to take a season away from you quickly. It’s why for me, I’ll be looking to own Whitfield for as long as possible in the season.

If he’s right for round one and gets some game time in whether intra or community series I’ll likely pick him. However, if he doesn’t, you’ll need a backup plan. Maybe that’s Rory Laird, or you stay in the same bye round and go after Tom Stewart. Whoever it is, make sure you’ve got a plan b ready to roll.

Lachie Whitfield will be a coaches D1, but where he goes on draft day in part will be linked to when your draft happens. Enough injury concerns and he could slide into the second round. If fit, he’s a middle of the first round selection for me.