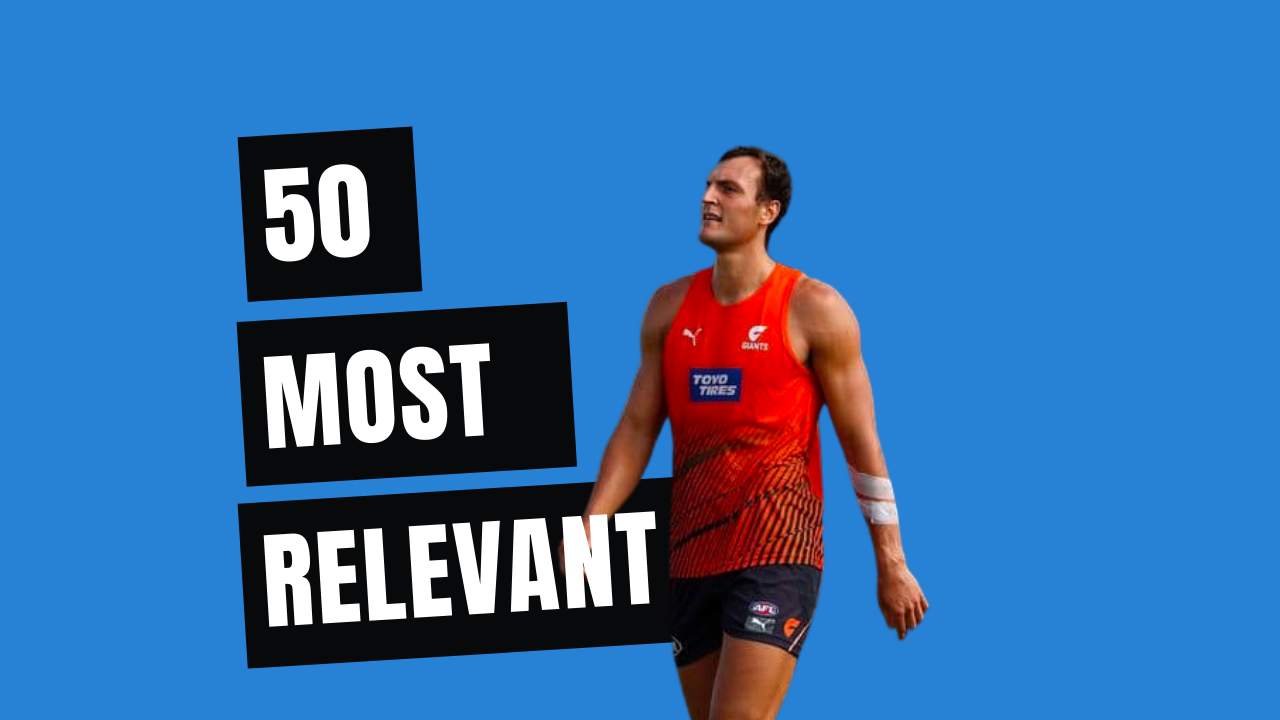 For years, Braydon Preuss was the understudy ruck. Now at GWS, nobody stands in his way. The big question fantasy footy coaches want to know, is what will he average in 2022?

Over the past few seasons, Braydon Preuss has found himself the ruck bridesmaid behind Max Gawn and Todd Goldstein. However, a 2020 trade to GWS Giants and an injury-riddled season debut crushed his hopes of finally leading the ruck division.

With only 18 AFL games under his belt, coaches might be justified in feeling the need not to get overly excited. And that may be warranted to some degree, but what has been seen is that Preuss is capable of delivering a significant return on investment for potential owners at the elite level.

In 2020 he averaged 50 in AFLFantasy/DreamTeam (62 adjusted) and 62 in SuperCoach from three matches. The latter format did include two scores over 80, not bad for a guy who played almost exclusively as a forward.

An entire season earlier, he played seven games, and again the majority of these were spent role sharing with Max Gawn. He ended the year with an average of 56 in AFLFantasy/DreamTeam and 67 in SuperCoach. Indeed, not great, but again he played predominantly forward. Although he did get to solo ruck (due to a late out from Gawn), he had a game featuring 15 possessions, five marks, 44 hitouts and scored a career-high 108 in AFLFantasy and 140 in SuperCoach against Carlton.

When he’s the sole or predominant ruck, he can score more than enough points to justify and reward coaches who select him. Go right back to 2017, and the pattern continues. In round two against the Cats, he was late in for Todd Goldstein, and against the Cats, he scored 105 in AFLFantasy/DreamTeam and 111 in SuperCoach. The week following, Goldy returned, but North allowed him to play the lead ruck role instead. He ended the game with another 105 AFLFantasy/DreamTeam and an 87 in SuperCoach.

The VFL stats are insane, but plenty of lower-level players have dominated at second-tier and struggled. The reason for not giving these much or any weighting from me is simple. He has shown at the top level; he can score when given chances; we don’t need secondary levels to display this.

Coaches know how to view Preuss this year accurately to get their heads around. Too many consider him a midrange option, but he’s not. In SuperCoach and DreamTeam, his price point across these formats is a genuine cash cow. What do you need from your cash cows? Weekly availability! Arguably more than anything else. The scoring ability is necessary and super important, but it doesn’t matter if they’re not playing. You need regular games to keep that breakeven moving and generating dollars. If he’s fit, he’s best 22; I have him as the clear #1 ruck. You could build a case that DreamTeam and SuperCoach is the best cash cow to start the season.

Let me take you back to when GWS and Gold Coast were first entering the competition. Those years, starting a cash cow in Zac Smith or Jone Giles at R2 didn’t feel risky, nor did we panic that it ‘weakens’ our team structure. Why? Because Giles and Smith had the greatest thing, a cash cow can offer a fantasy coach. Job Security. I’m convinced if fit, Braydon Preuss is the Giants #1 ruckmen.

As helpful as Matt Flynn and Kieran Briggs might have been, they weren’t t the long term solutions for the Giants. How do I know that? Constantly throughout the year, Leon Cameron looked towards Shane Mumford over them both. A 35-year-old who couldn’t run, couldn’t defend and was unable to put more than three or four games together before his body screamed stop! If neither of them could stop the old man from getting games, that’s ominous that they haven’t secured the top ruck mantle.

Why would you consider a stepping stone ruck? Simple! For one of two primary reasons. Firstly, you lack the confidence (or the finance) to invest in a set and forget ruck strategy. Yes, it’s threatening to opponents to see a Brodie Grundy and Max Gawn combination, but it’s also pricey. Ultimately the reason you apply a set and forget strategy is because you believe the decision of who the best rucks are clear and above the rest of the options.

He doesn’t need to compete with the top end premiums to make his selection worthwhile at his price point. But does he have the ability to do so? Historically Braydon has shown he can reach the ton on multiple occasions. But he doesn’t have to be that. The risk with players in this range is that they need to perform early to make the selection worthwhile. That doesn’t mean he has to average 100 over the first month, but he can’t be spluttering along at 50 after four weeks—anything from as low as a high 60’s can be enough.

We all want more, but given his price point, it’s sufficient even on the lower end of the scale. Remember, in SuperCoach; he’s under $4,000 cheaper than Jason Horne-Francis as the max priced rookie. He’s even greater value in DreamTeam.

We need 5-6 weeks of cash generation from these cows. That should allow us to quickly allow us the options to trade in the R2 you believe will average the most points for the remainder of the season. Seeing a cash cow/low-end mid-price selection like Preuss at R2 certainly looks and feels odd, especially for those who historically run a set and forget approach. But don’t narrow in on just that one positional selection. Choosing to run a cash cow at R2 frees up the salary cap to get another premium or midprice option across other lines.

The concern that does some merit is around how’s he recovering from the season missed of footy? Late last year, Preuss did have some surgery, but the Giants GM of Football recently told SEN that ‘he had some minor surgery at the end of the year, and he’s ready and raring to go.’ So that’s positive news that he’s back to full fitness. However, the information gets better as just days ago, Preuss himself told news.com.au that ‘I’ve never been in a position where I felt more comfortable being the No.1 ruck.‘ That’s an important statement.

Barring an injury setback, I will be starting Braydon Preuss in all formats, and I see him as one of the more straightforward selections we can make in 2022.

Unless you lock away one of the top tiers of ruckman early, you won’t be looking at one until the latter half of your drafts. Guys like Brodie Grundy, Max Gawn, Reilly O’Brien, Sean Darcy and even Rowan Marshall are all going super early in drafts. Braydon Preuss will be around for those wanting to draft a ruck late. And who knows? It could be a genius move. He’s shown. From limited opportunities, he can score well. Personally, I’d happily take him late and handcuff with a Matt Flynn for some security.