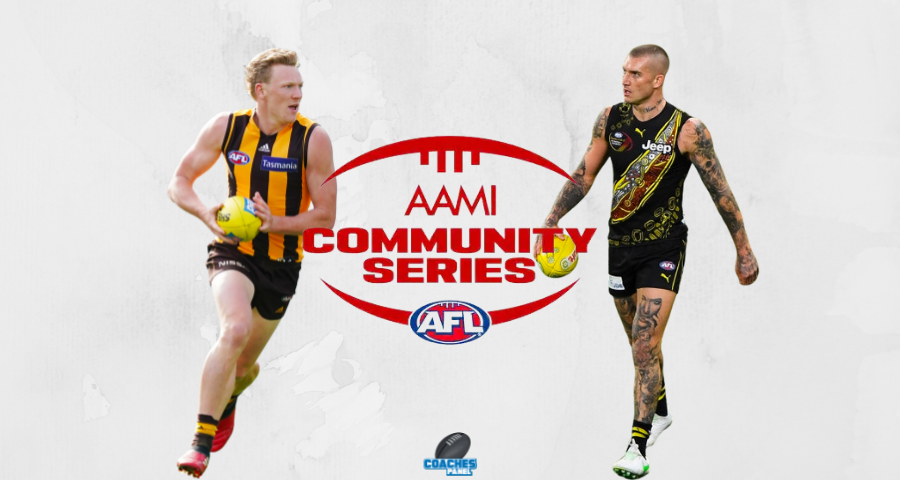 It was a young Hawthorn unit taking on an experienced Richmond outfit. The result was no surprise, but we learnt plenty from a fantasy footy perspective.

Arguably the biggest takeaway from the game. Lock in Josh Ward. He was sensational across the game, in my eyes he was the best Hawk on the ground. Ward won plenty of the ball, he made good decisions both with and without the footy & is a certainty to play round one.

Late last year the Hawks started to deploy Nash as a centre bounce midfielder. That role was evident yet again throughout this match. As a forward listed player player he could be a viable stepping stone for us to consider. The challenge with going ’all in’ on him in salary cap formats is that the Hawks were without Mitchell and O’Meara. How much of this role is the Hawks new normal? Or was he only given the heavy midfield minutes due to the absence of options? Sadly, we won’t know for certain until four rounds into the season.

Took his time to build into the game, but as the final siren went it was evident as to why Sam Mitchell is such a fan of his. Jai adds a defensive hard edge to the midfield and will allow other Hawk mids to play to their offensive best. I don’t mind him as a late draft pickup.

The Tigers had a super tall forward line with Riewoldt, Lynch, Balta & a resting ruck all inside 50. As a result, Sicily had to play a more accountable role and found less opportunities to peel off and intercept. Other opposition teams won’t play this many tall forwards, that means he should be freed to play his standard intercepting role. James offers excellent value and with the lack of cheap options in the backline he’s someone that every coach needs to consider regardless of the format.

The year of expensive cash cows continues with Connor plying his craft across the game. He looks was a fantasy star as a junior and we saw glimpses of it as the game went on. He’s already been hyped for a round one debut, and did his chances no harm with this game. I believe the hawks will be pushing to get 50+ games into him, Jai & Josh as a midfield trio as quickly as possible. If named round one, he’s a good chance to get multiple games early.

Dusty played… He looked good, and with so many doubts on forward premos he could just be the safest building block in this line.

Much has been made about the lack of cows in 2022. As a result, anyone priced under $300k that looks like they’ll get games we need to seriously consider. He’s available to be picked as a MID/FWD but is playing predominantly off halfback. I’ve been impressed with his development in the offseason, and as good as he’s looked I still have a slight concern. That is he’s a possible sub candidate most weeks. If named one round, I can see plenty making room for him at F5 or F6.

Not fantasy relevant, but when he’s fit and firing he’s so important to the Tigers structure. If he can get 20+ games then for those hoping for Richmond to miss finals again you might find yourselves disappointed.

Over the past few years Jayden has shown he’s a genuine top tier defensive premium. This match just sent up a massive flare around just how good he can be. If you were hot on him before this match, understandably nothing has changed.

Seems to finally has found his feet in the Tigers defensive 6. I couldn’t touch him in salary gap formats, but late on draft day he could be a brilliant flyer.