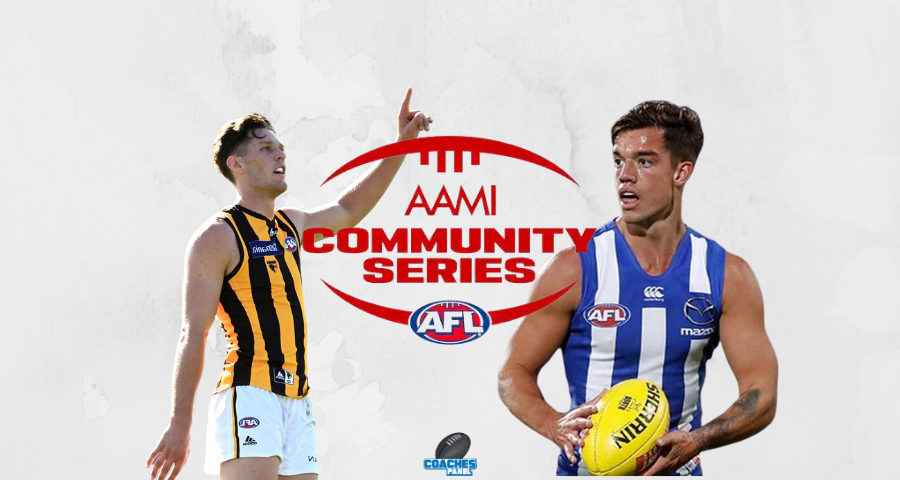 If you expect me (Rids) to put scores and stats into this, you have clicked on the wrong review. This review is my thoughts and opinions from watching the game. If you want stats and scores, then use google.

The important thing to remember here is that this was a Hawk midfield with no Tom Mitchell and no JOM, so I expect Phillips to find himself back out to the wing more often than not. Having said that, though, it is always good to add some strings to the bow.

He was everywhere and ran the game out well. If he played North every week, he could very well be the best forward in all formats for 2021. The kid can play and needs to be considered.

Kicked a bag full of goals which is nice. Will play rd 1. Lock that in now. Th best thing about his game is he actually played on a solid defender in Corr. Finally a def rookie option has emerged! His defensive efforts in the forward line also caught the eye

He is a serious option as a ruck 2, especially if Ceglar doesn’t get named round 1. Played plenty of ruck, then rested forward. Massive watch awaits on round 1 teams now. Damon Greaves – draft option, but this kid finds the footy. If he plays, then he will score. It is exactly what they say about life and taxes and death etc. One occurs, then the other will.

Shocking hair on the kid! Sat on a wing and looked at home. He has a ready made body for AFL footy. He will debut in rd 1. Lock that in now. He is also an on field rookie option across all the formats.

Started the game with a bang with 3 first qtr goals. Super quick and tackles which is great news. Another who will likely debut rd 1 (Clarko said as much before the game) Also has DPP so very handy.

That doesnt look right. That is right… it is Dom Tyson. Been a while since I have seen him play. He moved well and looked like the Dom Tyson who played so very well at the Melbourne footy club a few years back. This guy needs to be considered. Not sure you want 2 of Heppell and Tyson starting in your teams but Tyson did everything to be considered in this game.

He is very outside but because of his pace he outruns so many others on the field. He might actually be an ok option as a mid priced forward this year. He is a footballer. Silky smooth type. If you liked him before this game then no reason to jump off.

Hmmmm. Just hmmmm. He is big and slow and clumsy. He also took kick ins and played the half back role we have heard so much about. The best news is he is very cheap across the formats minus AF. It will turn you grey watching him though so try and make the coin quickly and urn him into someone that is fun to watch play footy. He will impact McDonald scoring though as his teammates try to look for him (no idea why as he isnt really clean by foot).

Powell is fantasy. Just start him on the field. Lazarro will be a player but not right away. Phillips is a while away. Needs a few runs under his belt. Stay away even if named early. Atu still forgets to try and get the ball in a game. Lachie Young was solid enough but his hair was in a bun so it is a no for me.

Ccan play. Sometimes forgets he has feet and handballs too many times. But I like him. Did nothing to not select him if you were already keen. I have gone a little cold but it had nothing to do with this game.

He’s starting to look like the junior LDU. I love watching how he gets thru traffic. I would suggest he is a draft only option this year, but he may go bang and surprise!

Overall, North deserves to be a heavy favourite for the spoon. They might cop a hiding or 2 thru the year. Be wary picking too many of them.