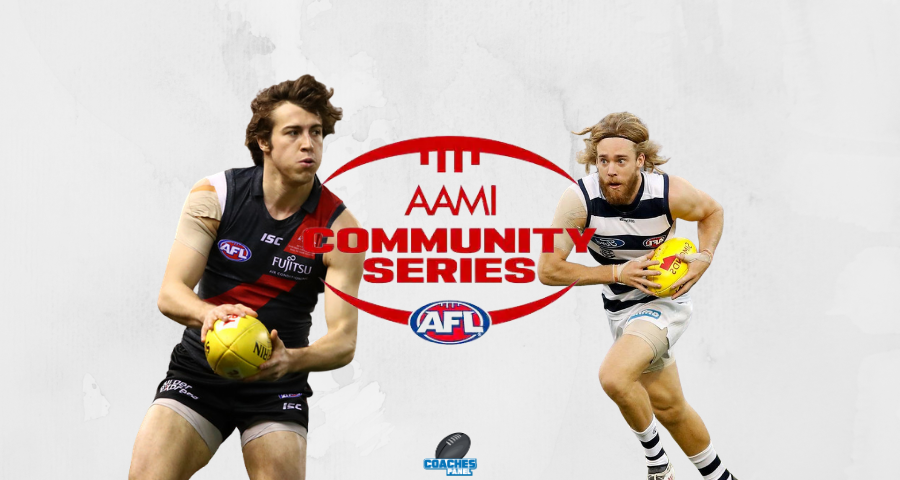 What a weird game of AFL. Geelong spent the vast majority of it either unwilling or unable to apply much defensive structure. At the same time, Essendon was playing as if they had 4 premiership points available. Regardless, there was plenty to take away from the AAMI Community Series clash between the Cats and Bombers.

All you wanted to see from Danger in this match was getting through it pain and problem free. Mission accomplished. The former Brownlow Medalist was a prolific part of the Geelong midfield when he was on the ground. If Paddy was already in your starting squad, you’d have no reasons to question that choice. However, those without him currently might have a few nervous nights sleep. He looks fit and ready to dominate through the Geelong midfield again.

He took his time to build into the game, but with two second quarter goals, Jezza showed glimpses of his brilliance. This was his first competitive hit out for his new side, so it was no surprise to see he and Tom Hawkins occasionally get in the way of each other. Both he and his Cats will be better for the run.

If you were keen before tonight, then there was nothing from this game to suggest to cool your interest in him.

Subbed out of the game at 3/4 time, but his class through the midfield and inside forward 50 was evident. If he maintains this split role, he should be gain himself a MID/FWD eligibility and become a valuable forward commodity in drafts formats of AFLFantasy & UltimateFooty.

Floated around playing in a vairety of roles and ended the match as the leading metres gained player in the game. He displayed some of his line breaking speed and took the odd kick out whenever Stewart couldn’t.

At under $250k in SuperCoach, he’s a genuine option if named round against the Crows. In this match, he showed his workrate, improved the defensive stuff and his ability to drive the ball forward. With minimal defensive cash cows with job security, it’s players like this we need to consider.

This one is more for draft coaches, but the human moustache has thrived in his new role off half-back. Gaining defensive eligibility in UltimateFooty and AFLFantasy is a certainty if this role continues. He got into dangerous positions across the backline and won plenty of the ball in the cats high possession game style. Certainly worth a late round flyer if positional changes are on,

It was business as usual for the defensive general. Yet again, he was the primary mover of the ball for kick-ins for the Cats from the defence. His teammates still look to him to control the play’s tempo, and barring an injury; he’ll be right in the mix for being a top 6 defender in 2021.

If before this match you were a Jye Caldwell truther then tonight’s game would only further have established that view. It’s clear, at Essendon he’s got that centre bounce heavy midfield role he never would’ve got at GWS.

Conversely, if you were still skeptical, not of the role but of his scoring potential then he’s probably not changed your mind tonight either.

Open match, low defensive pressure from the opposition and plenty of midfield minutes = a prime Zac Merrett style of game.

I was impressed with this kid. I think in time, he’ll provide a great marking target for the club. Even though he’s undersized physically, he still competes and throws his body around. He took a ripping aerial grab late in the game. I think he’s done enough to secure a round one debut.

He came into the game late, was only present for the final quarter. You can read this from one of two lenses. The first is an optimistic perspective and that the dons where wanting manage his workload and look at giving others a go in the forward structure. The other is more pessimistic that potential a forward line of Cale Hooker and Peter Wright the Dons have room for one of Waterman and Jones.

The halfback role is there, but I’m not convinced the scoring will be. And while Heppell does have the halfback gig, he’s not going to be the primary mover. The club based off tonight will either look to get Hind’s hands to rebound and run or allow Ridley to be the general with his foot skills.

I’ve had him on my side at various times of the preseason in all formats. But for now, I think we’ve got better scoring options at comparable prices. Sorry Dyson, your getting replaced!

He was impressive with his run and carry off half-back for the first three quarters of the game. However, at three quarter time, he was subbed out of the game with a shoulder injury. He’s likely to be among the first to gain a new position, and in draft leagues especially, he’s a nice late flyer option.

The role and the scoring trend we all came to know and love in 2020 appears to be carrying through into this year. He’s the clubs preferred kick in candidate and is still one of the best interceptors in the league. He’s a safe top 10 defenders in SuperCoach and right around the mark in AFLFantasy.

Another one that’s probably more draft relevant than classic formats, but Parish was impressive tonight. He played through the midfield, was clever and tight, and would then work hard to push into space for link-up possessions. Hopefully, the Bombers keep him in this role. He’s got the potential to be a fantasy performer if he does.

Worked his way into the game, and provided some drive late especially once Hind went off injured. He won’t be a great scoring cash cow, but he’ll be a pulse if we get desperate in our forward lines.

Floated between playing a forward and defensive role. No doubt the Bombers will try to get plenty of games into him, but don’t expect a lot of points as he’s a key position player. His DEF/FWD DPP is probably more helpful than the actual scoring or cash generation he brings.

Also, on behalf of Rids… get a haircut!