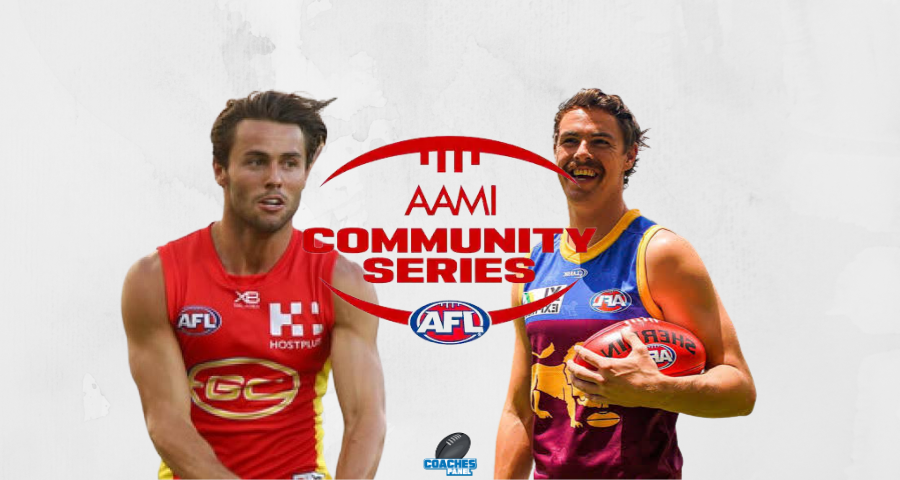 This was a classic tale of two halves sort of game with the Suns looking irresistible in the first half before being steamrolled in the second half by the Lions’ premiership fancies, who stormed to a 28-point win. Brisbane had kicked 11 unanswered at one stage as they put their foot down, but there was still plenty of positives for Gold Coast, including the return of the man, the myth, Matty Rowell!

Matt Rowell: There’s two ways we can look at this performance. The positive; Rowell was a magnet in the first half collecting 15 touches and looking like the hulking man-boy we saw dominate early last year. The negative; he looked a touch rusty throughout (to be expected), finishing with 20 touches and only laid 2 tackles. His numbers were decent for 70% time on ground and he attended a heap of centre bounces but there’s just enough doubt in my mind on whether he is the absolute must have we though or if we are better off waiting to see how his shoulder fares in the early rounds. There is also the chance I’m overthinking it and maybe at his price he still is a no-brainer. Food for thought though.

Jarrod Witts: He may have burned a few last year but Witts has put his hand up as a stepping stone R2. He dominated the up and coming McInerney with 36 hit outs and 13 touches from just 74% game time. I’d expect his time on ground to be back up above 90% in the home and away season. Looms as a unique compromise between the set and forget boys at the top and the whacky value picks at the bottom.

Oleg Markov: Dashing half back defenders have been trending this AAMI Series with the likes of Short, Clark, Houston and Sinclair dominating so it was fitting we had one more name to throw into the ring in the final game in Markov. The former Tiger floated around doing as he pleased on the way to 21 touches and 9 marks. What I really liked was how many plays he set up and how often the Suns players seemed to look for him. Very cheap in salary cap formats but realistically more viable in Drafts.

Will Brodie and Darcy MacPherson: I put these two together because of the many similarities between them. Both had poor seasons last year struggling to find a spot in the 22.  Both have shown great fantasy ceilings before last season and are DPP mid/forwards. Both have had good pre-seasons and looked excellent in this game. Splitting time between the guts and high half forward, their stats and impact on the game was noticeable. Brodie had 25 touches and a goal while MacPherson had 22 touches and 10 tackles! I really like both as uniques and should be snagged in Drafts. Hard to split them but I’d pick Brodie as he has the slightly better job security, only just though.

Lachie Weller: Had29 touches, 9 marks and a goal and continues to improve as a pure mid looking classy everywhere he went. Draft only.

Touk Miller: I can’t work out why this guy has never gotten much love in the fantasy world; perhaps it was his early days as a tagger. He’s set for another solid year racking up 30 touches in this hit out.

Wil Powell: Confession time, I had to look this guy up as I didn’t know a lot about him. Was incredible tonight but at this stage I’m calling it a bolt from the blue. Had a whopping 12 marks and repelled everything in the back half.

Noah Anderson and Jack Lukosius: Geez, the future is as bright as the sun for Gold Coast with brilliant kids across every line. Whilst probably still not time to pick them in salary cap games, these two look like taking another step this year. Anderson looked a class above the rest in the first half and Lukosius was typically tidy throughout.

Jarrod Berry: Berry was my best on ground tonight as he was the only Lion to perform strongly across all 4 quarters. He was huge all night collecting 28 touches, 9 marks and a goal and his tackling was a real feature, laying 5. I think he’s pretty close to being ready for our fantasy midfields.

Lachie Neale: The Brownlow medallist struggled to get going in the first half and appeared to have Greenwood for company at the stoppages. Like his side, he exploded into life in the 3rd quarter with 13 touches and finished right near the top for fantasy scores. He will be awesome again this year albeit at a whopping price.

Dayne Zorko: Speaking of exploding into life in the 3rd, Zorko joined Neale in putting on a clinic with a couple of goals and plenty of action all over the ground as the Lions took control of the contest. He was very quiet in the first half though and I do have concerns he will be playing more forward this year as the next generation comes through. He finished with 19 touches and 9 marks and was the Lions best in the 2nd half comeback. If it weren’t for the likes of Danger, Dunkley and Dusty, he’d be close to a must have forward.

Joe Daniher: I watched big Joe very closely as he has sat in my forward since he dominated the practice match last week. He struggled in the first half mostly due to the lack of supply as the Lions midfield could not get their hands on it, but he was much more involved in the second half finishing with 3 goals. His role is very solid for fantasy scoring as he got up the field and even pinch hit in the ruck. At the end of the day though, he’s a key position forward and with the plethora of similarly priced young midfielders in the forward line, I don’t think I can do it.

Tom Fullarton: Cash cow alert! The big 200cm ruck/forward was impressive for his size and amazingly, kicked two of the best crumbed goals of the night. His stats were lean, but he did enough to fill the vacant spot left by the injured McStay for round 1. His DPP flexibility makes him a nice option for our benches.

Grant Birchall: He scored well tonight but don’t be tempted, his body can’t be trusted.

Zac Bailey: The opposite to Birchall, he didn’t score well but remain tempted if you already were. The midfield role is there for him and we will see a nice spike in his fantasy scores this year.

Oscar McInerney: As a draft owner, I was a bit disappointed in his game. He didn’t take a mark all night but to be fair, his scoring was more a reflection of how strong Witts looked. He still had 27 hitouts and is the clear number 1 ruck at the Lions.

Hugh McCluggage: Had a quiet night but still should be a reasonable scorer off the wing this year. I think Berry’s gone past him in fantasy relevance.