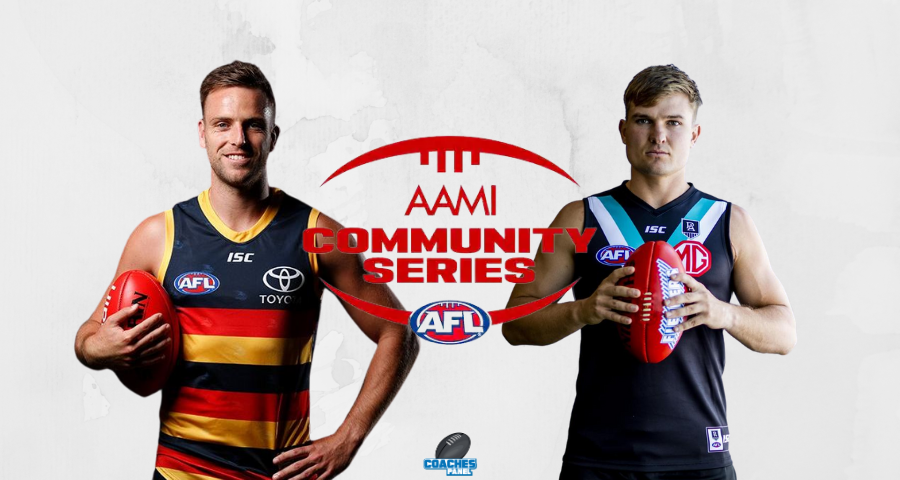 It was a one sided affair in the mini showdown. The Power controlled the tempo of the game and, as a result, dominated the possession and the scoreboard. Here’s my review of the AAMI Community series match between the Power and the Crows.

Confirmed his midfield role. If you like him then lock him in. Will be a top 3 defender.

Sloane looked okay, but a veteran like him and a player of his ability doesn’t break a sweat in preseason games anyway. Personally, I think age is catching up to him, and his midfield rotation may become volatile as the season goes on if he’s on your side though he only needs to have a good first 6 weeks.

Took 5 marks as a key position defender. Won’t be a large scorer but the ball will be in his area plenty. With thin defensive stocks Butts has put his hand up as an option.

Got involved in the play and pushed high up the ground to find the footy. Lock for R1 and great job security. Scoring a question mark.

Took things easy. If Crows get belted every week, he’ll be attending plenty of centre bounces as the Crows #1 ruckman.

Quiet first half but scored 60 of his fantasy points after half time. Nicks will look to use a young crow as he pumps experience into a young Adelaide group. Awkward price, though, and Adelaide will not be a fantasy friendly enough team to warrant it.

Quality player and found plenty of the footy in adelaides defensive 50. Another that’s awkwardly priced as I believe he’s more of a stopper than accumulator.

Took the kick-ins and the Crows continually looked to use him and his booming leg to gain metres forward.

A very good, contested game that doesn’t always necessarily translate to fantasy scoring. This game did but I’m not sure wines has the consistent ceiling or upside to consider as a starting option

Took intercept marks at Will and given how thin defensive stocks are could actually be an option at his price. Hard to do it though with how poor Crows I50s were and not playing Adelaide every week. Port picking both Jonas and Clurey does point to Aliir being there intercept marking defender but scoring will be volatile and role could rotate based on opponent.

Will go to the next level in 2021. Attended more centre bounces than previous years which has been the messaging out of port Adelaide throughout the preseason as well. Really interesting pick that has a lot of upside – but it’s unnecessarily risky with other safer options priced similarly or less.

Will see a large uptick in centre bounces and being high up the ground. Fills every stat line and his inclusion into the port midfield could see him breakout in 2021. He’s a high impact per possession player, and his best footy performances may not always translate in fantasy though. He’s a great pod to consider starting this year.

Plenty of uncontested marks were up for grabs today, and Bergman was a beneficiary of that. Looked at home across half back and extremely composed with the footy. Likely to play R1 on that performance.

He had extremely high PPM as he scored 73 in the first half before being rested in the second. Handy DPP of F/D and a low salary cap price make him an intriguing option to start this year. Scoring will be volatile, but he does have a little bit of fantasy game about him.

Ready to play but won’t be a large accumulator. He won’t score enough to warrant his price but he will be an excellent player one day

Port have confirmed he will be having footy surgery. No longer an option

Another ACS hype player. Took advantage of playing a bottom 4, young side, in a preseason game. If you were already keen on him, it’s a great confirmation of your own thoughts; however, if he wasn’t on your radar before, he shouldn’t be now.